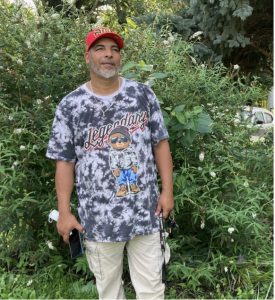 I met Abdel Karim Ouard at the Heart of the Hill Community Garden in Allison Hill in September. It was a sunny day, and teenagers were hanging out near a pull-up bar while other adults sat on benches talking.

Ouard walked just a few blocks down Derry Street from his house to meet me at the park and pointed out a building he owns adjacent to the garden. He also told me that this was his first time coming to the garden to sit.

Every other time, he’d visited to help clean and maintain the neighborhood garden, he said.

Originally from Morocco, Ouard immigrated to the United States and came to Harrisburg about 20 years ago, followed by his wife a few years after his arrival. The family was looking for a better life, he said. But he admits it hasn’t been easy. Ouard previously sold hotdogs at a food cart in downtown Harrisburg, but has recently opened a new food truck in Allison Hill.

“I like cooking for people and feeding people,” he said.

He’s been a busy man, working hard, long hours to provide for his family, he explained. But over the years, Ouard has been known to help around the neighborhood whenever he can. That has included participating in trash cleanups, painting fences, helping people in need of food and inviting neighbors to backyard cookouts. Often two days per week, Ouard volunteers at Fountain Gate Church’s food pantry on Derry Street.

It’s often the organizations, those who run nonprofits or movements, and their vocal leaders who we look to. We make the charismatic figures our heroes. All the while, people like Ouard fly under the radar, dedicatedly caring for their corners of Harrisburg.

And the thing is, many of these people don’t really care to be heroes—several people I reached out to for this story didn’t even want to be interviewed.

For Ouard, it’s more important what his family and neighbors think of him. It all stems back to a promise he made to his mother before she passed away last year.

“I promised her that I would help people,” he said. “I’m doing my best.” 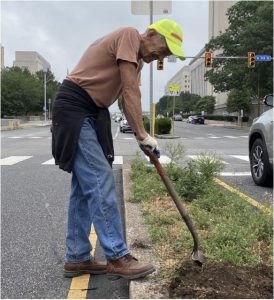 About three days per week, Keith Edwards crosses Forster Street, between Green and 2nd streets, but only halfway. For a few hours in the mornings, he plants himself in the narrow median, careful to keep his arms and legs inside the little island refuge, safe from the street’s speedy traffic. There was a close call with a truck’s side mirror once.

Although maintenance of the median falls under the city’s responsibility, Edwards has stepped in over the past year to pick up the slack.

Harrisburg Young Professionals used to take care of the median until the pandemic hit. Edwards picked up the baton and, for the past year, has taken it upon himself to weed, trim and plant in the island.

Edwards, a 72-year-old retiree, traces his service-mindedness back to grade school. He remembers learning the importance of civil service from his sixth-grade teachers. John F. Kennedy’s inaugural address, in which he said, “Ask not what your country can do for you—ask what you can do for your country,” still sticks with him.

Over the years, Edwards has helped with neighborhood gardens in Harrisburg and picks up trash around his downtown neighborhood, as well.

With the words of Kennedy still ringing in his head, Edwards said that he doesn’t just feel inclined to take care of his neighborhood, but obligated to.

Seeing the importance of a clean, well-kept street to welcome residents, commuters and visitors into the city, Edwards began dedicating time to the median on Forster Street.

“It would be great if, someday, we had blocks of trees and plants to welcome people into the city,” he said. “If nothing else, I hope it gives people a glimpse of what can be done.” 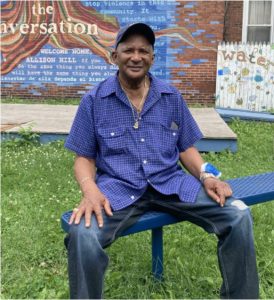 Like Edwards, Allison Hill resident Bill Holland is a child of the 1960s, and his upbringing impacted the way he sees his responsibility to his community.

As a young man, he was involved in ROTC where he was taught the values of leadership and service to the community.

These days, he does that by cleaning up trash in the neighborhood and helping Tri County Community Action with beautification projects. He’s weeded and cleaned many local parks, and recently adopted a few of the new planters to maintain on Derry Street that were installed by Tri County and painted by Sprocket Mural Works.

“As I walked through the neighborhood, all the litter bothered me,” Holland said. “That’s why I started cleaning up. I feel like God has placed me here.”

Holland is known around the neighborhood not just for what he does, but for how he looks. Although he was in jeans when we talked, blinged out in a cross pinky ring and a praying hands gold chain, Holland said he is usually dressed much classier.

He’s been known to wear this ensemble even when picking up trash, he said.

People may not be dressing to the nines like he is, but since Holland has been out cleaning, he’s noticed local homeowners following his example and picking up trash around their properties.

“I’m hoping I can show a different way,” he said. “It’s about having pride in where you live. I’ve been seeing change.”

Ouard, Edwards and Holland aren’t widely known Harrisburg celebrities, their names aren’t circulating on Facebook, and they aren’t making the news (until now). But to them, it’s the little day-to-day actions, the commitment to being a good neighbor that drives them. If they receive any attention, their only hope is that it inspires others to try to do good, too.

“When people look back, I want them to say that I wasn’t a great man, but a good man,” Holland said. “I would like to leave a legacy of helping people.”