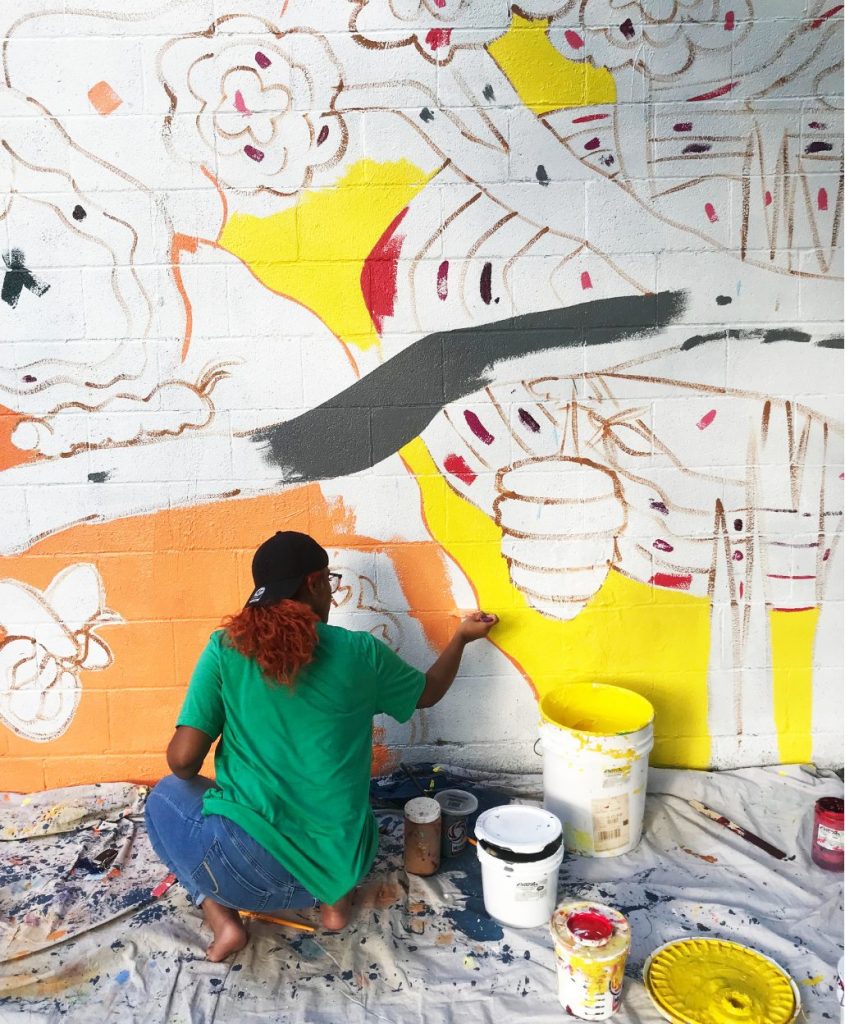 Patrick Alley in Midtown Harrisburg likely would’ve fit the description of what moms picture when they tell their kids to avoid walking in dark alleys.

It was an overgrown, neglected space known for crime and trash dumping behind a strip of businesses on the 1300-block of N. 3rd Street—not exactly pedestrian-friendly.

In 2019, Sprocket completed a mural on the side of the Broad Street Army and Navy Store on Sayford Street. During the outreach process, Caruso was talking with neighbors and heard a recurring theme—their dissatisfaction with the adjacent Patrick Alley. Caruso and volunteers developed a plan.

Starting on Martin Luther King Jr. day in 2020, a group of over 30 people from Sprocket and the neighborhood group, Friends of Midtown, hauled out two truckloads of trash, furniture and weeds from the alley. Since then, there have been several more cleanup days.

Over the next year, the organization, with the help of local volunteers, transformed the blighted alley into a pocket park—a colorful, natural escape.

Volunteers planted over 100 new plants, installed a rain barrel to water them, spread wood chips, and, in typical Sprocket style, brought in an artist to paint a mural.

“Murals and plants are both very powerful forces individually, but even more so together,” Caruso said.

While the Patrick Alley project has had a huge aesthetic impact on the neighborhood, Caruso was quick to point out that the endeavor was far more encompassing.

Funded largely by an Environmental Education Grant from Pennsylvania’s Department of Environmental Protection, the mural and park were created to be both environmentally friendly and educational.

“We are really happy to be able to support and work with them,” said Kathleen Banski, the environmental education program coordinator for the DEP. “They are really trying to identify what the community needs.”

While the DEP funded 51 projects in 2021 and has awarded over $12 million in grants over the years, Banski believes that this is the first time they’ve funded an artistic mural. Sprocket’s vision and energy drew them in, she said.

The mural, by artist Gloria Jean Martin, features flowers and honeybees, highlighting the vital role of pollinators and native plants in the state’s agricultural environment.

Martin, a Harrisburg native, finds inspiration for her work through nature, fitting in perfectly with the theme of the project.

“Nature is our first teacher,” she said. “We learn a lot from nature. It impacts our lives.”

Caruso said that Martin was a natural choice for the project since she specializes in painting whimsical floral scenes, including bees and butterflies.

According to Penn State University’s Center for Pollinator Research, the state is home to hundreds of species of pollinators, including bees, butterflies, moths and beetles. Crops that rely on pollinators contribute over $260 million to the state’s economy annually.

However, according to the center, pollinator populations across the world are shrinking due to habitat fragmentation, pesticide use, climate change and the spread of emergent pathogens, parasites and predators.

The mural shines a spotlight on these crucial creatures to the environment, Caruso said. Informational signage will also accompany the mural as an educational tool.

But not only does the mural seek to communicate a message, the entire park is an example of what residents can do to create an environmentally friendly garden in their own space.

Dunlap and Sprocket hope that the pocket park will serve as a model for the community.

“Planting native plants is something almost everyone can do,” Dunlap said. “It’s a way that anyone can be a part of restoring the environment.”

Manada offers the community a chance to start their own native gardens at their native plant sales. One will take place at the East Hanover Township Nature Park on Sept. 11.

They also plan to hold a pop-up native plant sale in partnership with Sprocket near the pocket park.

“We want to make it easy to get native plants into local people’s hands,” Caruso said.

Not only did Manada share in Sprocket’s vision for creating more gardens in the city, other organizations donated, as well.

Master gardeners from Penn State University brought armfuls of plants and bulbs to plant in the pocket park. The city also pitched in, leaving a pile of woodchips for volunteers to spread.

“There’s a lot of people invested, and hopefully with the mural, we can find ways to not only make it look good, but have people learn something,” Caruso said.

When Puja Gellerman moved to Harrisburg a few years ago, she was hoping to get involved in the community. She loved to garden and started asking around to see where the local green spaces were.

When Gellerman started talking with Caruso about the neglected Patrick Alley and creating a vision for it, she saw an opportunity to get involved in bringing beauty to the community.

“As an occupational therapist, I know and understand the therapeutic value of gardening,” she said. “I’ve always had the belief that the beauty around us helps us feel good.”

Gellerman participated in the first cleanup day in 2020 and more since then. She hopes it will serve as a “pilot space” for other areas in the city.

Sprocket is already working with Manada to discuss future partnerships and ways to enhance Harrisburg’s beauty and environment.

“The strength that they have, that we are really excited about, is that they are going to be making local connections,” Banski said. “Environmental education isn’t teaching people what to think, but how to think about what is going on in their community.”

Most of Sprocket’s murals involve some preliminary cleanup and landscaping, but this was their first that included gardening on a large scale. According to Caruso, she hopes it’s not their last.

“I think this is a great example of what can be done in the city when everyone pitches in,” Caruso said. “We have so many people willing to help make things beautiful.”