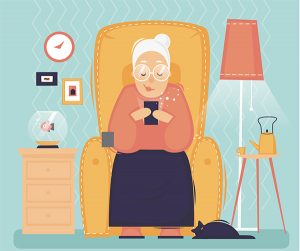 Mavis McCollam looks forward to the Country Meadows lifelong learning broadcasts, including a new series on world cultures. Shows delve into people and architecture. A monthly meal ties into the featured country.

“Roast duck,” she said of the previous night’s Denmark-inspired dinner. “Some kind of potatoes. And then a Danish rice pudding, which was different from ours but was very, very good. It has almonds in it.”

There’s a lot of living going on inside the midstate’s retirement communities and group homes. When COVID-19 restrictions shut the doors for most non-residents except employees, it set off a constant churn to ward off isolation and keep residents engaged, connected and active.

“They cannot hug anymore,” says Teri Gotti Szubinski, psychotherapist with PinnacleHealth Psychological Associates of Pennsylvania at UPMC in York. “They cannot even hug their loved ones. They cannot even hug nurses or caregivers. They are completely tossed to the side. That’s a hard thing to comprehend when you wake up in the morning and all this is going on, and there seems to be no end.”

More on the creepy-crawlers later.

No family visits. No entertainers. No volunteers spreading cheer. At the midstate’s residential facilities, the creativity caps are worn 24/7 to fill the activities void.

“They can talk to the folks they’ve gotten to know over the last couple of years,” said Jodie Smiley, executive director of Paxton Ministries, administrator of the Harrisburg-licensed personal care home. “There can still be that communication. It’s not the same, but we can still stay connected. It takes a lot of creativity. It takes a lot of staff time, but we can still stay connected to many people.”

Isolation is a real danger when residents in group settings are cut off from the things and people they love, said Gotti Szubinski. Those who can’t comprehend the why behind the sudden break from loved ones can feel abandoned. It’s the employees who step in to relieve their “unforgettable grief and sadness.”

At Paxton Street Home, where residents once walked up the road for their mushroom-and-Swiss “Thickburgers,” staffers take orders for Hardee’s takeout. Country Meadows Retirement Communities, which includes campuses in Mechanicsburg and Hershey, commandeered its in-house television circuit to broadcast in-room wellness sessions, high school students performing their numbers from canceled musicals and do-what-you-will programming from staff.

“At one campus, an associate’s daughter rescues reptiles and all those creepy-crawly things,” says Executive Director of Dynamic Living Kim Eichinger. “She did a program on rescuing these lizards and spiders. She took residents into her room and had the spiders out.”

At the Middletown Home, even residents’ outdoor visits with family on the 100-acre campus have been curtailed at times. There, staff “in some way have become their surrogate family.”

McCollam and her husband, Ron, moved from West Virginia to Country Meadows Mechanicsburg in May 2019. Today, she laughs about the timing.
Louis Vogel
“Let’s move to Pennsylvania,’ she recalled saying. ‘We’ll be close to the grandchildren and great-grandchildren.’”

At residential facilities nationwide, an army of staffers is wielding iPads as weapons in the fight against loneliness. FaceTime and Zoom sessions, all agree, are no substitute for family visits, and people with dementia can struggle to understand what’s happening.

“The wonderful thing about these caregivers, I cannot say enough about them,” said Gotti Szubinski. “The very same people who used to run activities like bingo and dancercise—they are the same people now who are dressing up in the gowns and whatever they need in order to walk into the rooms with an iPad or an iPhone so they can help these residents talk to their relatives, sometimes for the last time.”

Country Meadows found other ways to sneak in hellos from family members. For Mother’s Day and Father’s Day, family members selected special appetizers or desserts and sent personalized notes to be shared on the meal trays—delivered, of course, individually to rooms.

“We’re just trying to make the simplest things fun and surprising for the residents,” said Eichinger.

Easy? Not at all. Actually, wrenching sometimes.

“The hardest thing are the residents who are somewhat confused,” added Eichinger. “The whole mask concept is difficult for them to wrap their head around. They need the ability to be aware of where their body is in space. For some of them, cognitively, it’s a challenge. It’s hard for them not to snuggle up with their friend on the sofa, elbow to elbow, because that’s what gives them comfort.”

“It doesn’t sound like an awful lot, but something that’s really, really important is for folks to be physically present and just to listen,” said Vogel. “It’s about being physically present and sitting there, even if you have to wear gloves to hold somebody’s hand. Whether it’s praying with them, singing with them, being a liaison and getting their family on a Zoom call. It’s any of those wonderful things.”

Spiritual support helps ward off the worry that worsens depression and anxiety in the elderly, said Gotti Szubinski. “When you have spirituality in your life, faith in your life, it makes the future a lot less fearful.”

At Paxton Street Home, volunteers were able to come in and decorate a “Christmas corner” in holiday style. Residents came for photo shoots, posing for pictures sent to family and friends.

“What do you do?” said Smiley. “This is a year when you make a plan and adjust. That’s the reality for all of us. You just adjust.”

As 2020 neared its end and a vaccine loomed, Smiley reminded residents, “You’re doing a great job.”

“We understand that it’s bad out there,” she told them. “You’re doing a great job. There is a light at the end of this very, very long tunnel. You’re three quarters of the way there. Hang in there.”

“It gives us something to do,” she said. “We can meet with a few people at a time and enjoy something and talk with other residents. You’re not just sitting in your apartment, vegetating. It keeps you active. It keeps you engaged. They’ve done a good job.”

For the duration, those creativity caps are secured firmly on heads. At Country Meadows, in-house-produced exercise broadcasts target the motor skills that diminish when people are confined to their rooms, walking only from bed to bathroom to lounge chair. For the holidays, Eichinger and the Country Meadows fitness director developed a “12 Days of Fitness” program.