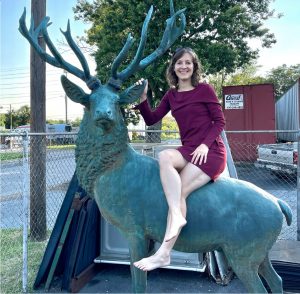 Crystal Skotedis atop the elk at the scrapyard.

“We’re driving down some side streets, and I see it in a junkyard.”

Yes, a majestic statue of an elk would stand out. Crystal Skotedis thought her search for a forgotten piece of Harrisburg history—ostensibly what this story is about—had hit a dead end. Suddenly, there it was, as if the call of the elk had lured her to this spot.

Where to start? With the well-traveled statue, or with Skotedis’ sleuthing that led to new connections in family and Harrisburg history? Let’s begin with Skotedis.

Visiting her grandmother in North Carolina, Crystal Skotedis was poring through family photo albums. A sepia picture of her great-grandmother and an unknown woman sitting on a bronze elk seemed jarringly whimsical.

“These people were from Lewistown,” Skotedis told me. “They never, ever traveled. They were farmers. For her to go to a destination and climb on top of a bronze statue, it was kind of surprising.”

She turned over the photo. “Harrisburg, Penna,” it said.

“What are the chances of that?” Skotedis marveled. “That’s where I live, and I have never seen this elk in my life.”

So many questions. Who was that other woman? Why had Skotedis never seen this elk? Where was it now?

An internet search revealed a PennLive story on Harrisburg’s monuments, and there it was—an elk erected in Reservoir Park by Elks Lodge #12, Harrisburg, PA.

In 1896 and 1897, Harrisburg attorney Meade D. Detweiler served as Grand Exalted Ruler of Benevolent and Protective Order of Elks of the USA for an unheard-of two terms. In that age of joining, he was renowned for his oratory and as the only person with “nerve sufficient,” in the words of one newspaper, to mediate disputes among warring Elks factions.

After the national Elks disbanded Harrisburg’s first Elks lodge, Detweiler recruited leading lights for a new lodge and, with his national clout, fought off other lodges for a coveted low number that had become available. In June 1904, just as national officers were arriving in Harrisburg to celebrate initiation of B.P.O. Elks Lodge #12, Detweiler fell ill and died, age around 38.

In October 1906, Reservoir Park resounded with speeches, poetry and music. Hundreds gathered for a ceremony dedicating Lodge 12’s Detweiler memorial, a $10,000 edifice of towering column, Detweiler bust and statue of an elk.

The work would “forever stand as an emblem to those beautiful, ennobling, uplifting, humanitarian principles of your order: Charity, justice, fidelity and brotherly love,” said Charles A. Disbrow, then-president of the city parks board. “In accepting the care of this handsome monument, which you have so generously presented to the city as an adornment of this park, the Park Commission promises you to cherish and preserve it in its present artistic beauty.”

By “forever,” Disbrow apparently meant about six decades. Someone broke off a tip of the horns that, in Elks lore, represent the spreading antlers of protection. Around 1966, Lodge #12 moved the statue—first, to its lodge in downtown Harrisburg, and then to guard its new lodge on Woodlawn Street, near the city line with Paxtang borough.

In those intervening generations, the statue became a destination. Locals and visitors would trek to Reservoir Park and hoist themselves on the back of the elk. Someone would pull out a Kodak Brownie and snap a pic.

“I’m pretty sure I have a photograph of me sitting on it or beside it when I was little,” he said. “It was a favorite spot for parents to take their children to get their picture taken.”

Jenny. That was the other woman on the elk, the sister of Skotedis’ great-grandmother. Skotedis learned this when her grandmother suggested that she connect with the daughter of her great-great-grandfather’s brother—still in Lewistown and a keeper of “generations of old family photo books.”

“She let me borrow her life’s work to take home and enjoy,” Skotedis said. “At this point, I’m anxious to see if I can find this statue. Maybe I can sit on it and re-create the photo.”

Skotedis dragged her husband to the Elks lodge, but the building recently had been sold. Her next thought—drive to Reservoir Park and take a photo at the statue’s pedestal, standing in the footsteps of her great-grandmother, named Zelda Irene Harshbarger.

That was when they passed that scrapyard. The gate was open. No one answered at the office. Skotedis hopped on the elk, her husband snapped a photo, and they darted away.

Worried that this “relic of the history of Harrisburg” would be melted down, Skotedis contacted Elks Lodge #12 and got a return call from Exalted Ruler Robert “Bullit” Martindill.

“He was wonderful,” she said. “He was as robust an Elk as you’d want someone to be.”

Sigh of relief there. The elk will not be melted down. The scrapyard belongs to a lodge member who accepted the statue for safekeeping after the Woodlawn Street building sold. It might even move temporarily to West Shore Lodge #2257 until Lodge #12 finds its new home.

“That elk shows that we’re there for the community, and we’re here to spread goodwill and do what we can to help out,” said Martindill. “That’s why it’s important to keep the elk intact and have it displayed in front of our Elks building or any Elks building at this time.”

So, they erected a monument in 1906. What else was going on in Harrisburg back then?

Oh, just construction of a water treatment system to eradicate the scourge of typhoid. And the paving of impassable dirt streets. And creation of a parks system that sparkles to this day. And the dedication of a grandiose state Capitol building.

Embracing the City Beautiful movement, Harrisburg was transforming from a swampy, disease-ridden backwater to a capital city.

“Statuary was a big part of it,” said Frew. “I’m sure that the Elks monument was part and parcel of that movement.”

With a career in public accounting, Skotedis is a principal with Boyer and Ritter LLC and a Harrisburg resident since 2003. She feels “appreciation and gratitude” for those City Beautiful pioneers and, following in their footsteps, serves on the Capital Region Water board.

“You can kind of transport yourself into that timeline and get energized by the passion of those people who were establishing a community,” she said.

Skotedis texted relatives with the play-by-play of her elk hunt, including the discoveries in their own heritage. There was the ninth great-grandfather who was the first Amish bishop to settle in Pennsylvania. An uncle helped test the first space shuttle and joined investigations into the Apollo I fire.

Mostly, Skotedis gifted her beloved grandmother, Doris Reed, with stories that brought young Zelda to life. As a businesswoman with a positive spirit, Reed was “my living, breathing example of a woman in business who was really assertive and really empowered,” Skotedis said. “I know 1,000% that’s one of the reasons I knew I could go into public accounting in a still very male-dominated field.”

Martindill, of Hummelstown, is a retired police officer still living with injuries sustained while rescuing inhabitants from a burning house that exploded around him. While other civic organizations bleed membership, he is busy initiating new members eager to serve.

“The young people mingle with the older crowd, and they’re respectful and they learn things,” he said. “In order to go forward in life, you need to understand what all us old farts have gone through to give you some direction.”

Skotedis sees that commitment to service in her search. She met people passionate about the community. She uncovered a quirk of Harrisburg history that draws others into its orbit. She found a statue and, she hopes, will follow its journey, wherever it leads.

All from a sepia photo marked “Harrisburg, Penna.”

“If you peel back a couple of layers, you’re not that far unrelated from people who walk down the street,” said Skotedis. “Holy cats. The elk really unified our family in a whole new way.”

For more information on Harrisburg Elks Lodge #12, visit http://bpoe12hbg.wixsite.com/website or their Facebook page.