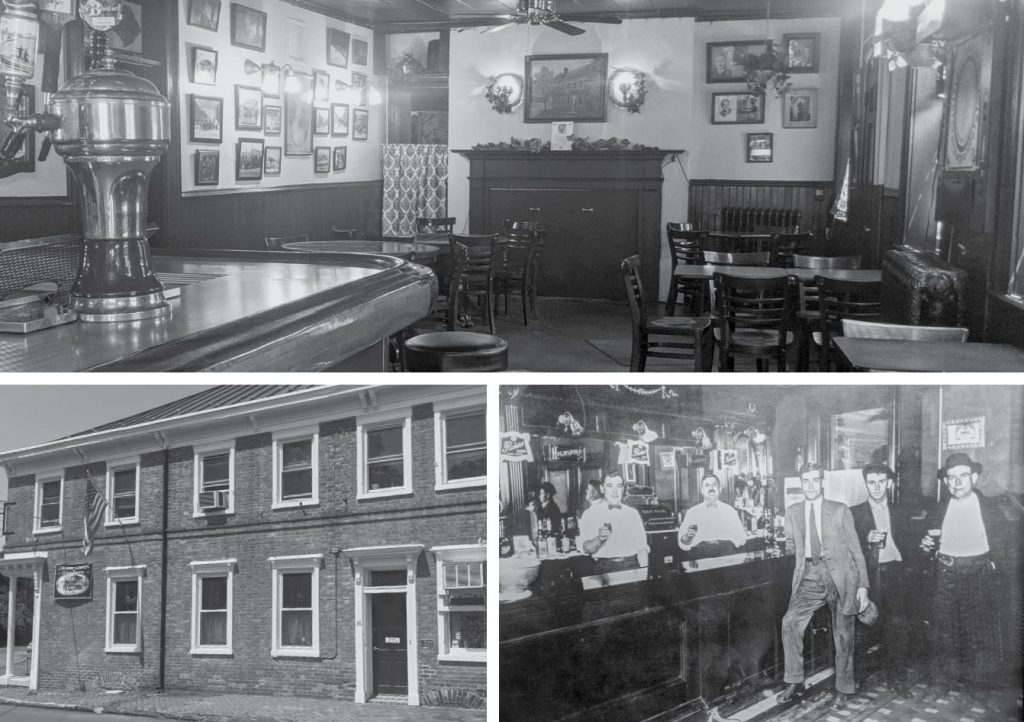 J. Robert Shank busied himself chopping vegetables in the kitchen of Shank’s Tavern as he talked.

“We have a labor shortage, as you know,” he said, explaining his prep work.

He pointed to the ceiling.

“I was born up there approximately 73 years ago,” he said, referring to the apartments located above the business.

Shank grew up in the tavern and often lingered behind the jukebox as a child to eye up the clientele. You can tell that he’s proud of the provenance of the business that was established in 1814 and is known as the oldest tavern in Lancaster County.

“A riverboat captain used to own this place,” he said.

According to Shank, his grandfather, who purchased the tavern in 1930, benefited from the former Olmsted Air Force Base nearby in Middletown.

“The Marietta branch was the depot, so it was ‘Libertytown’ for GIs, and we always had good food and cold beer for them,” he said.

Eventually, Shank’s mother and father took the helm—that is, until the pair divorced, leaving his mom with the bar business.

For years, Shank studiously tried to steer clear of the place, enlisting in the Navy, seeking acting work in California and even moving to Florida to open up another bar. But like an old flame, the tavern wooed him back.

“When the Florida venture failed, I came home and tried to sell the place,” he said. “Then a light bulb went off in my head, and I said to myself, ‘Hey idiot, it’s paid for, it has a liquor license, get your head out of your butt and start running it like it’s supposed to be run,’ and the rest is history.”

That history is evident in the black-and-white pictures that festoon the walls and the décor that hasn’t changed in ages.

“Everything’s original except the wall that was taken down in 1954 that separated the ladies from the men,” Shank said.

And, like many old buildings, Shank’s is said to be haunted.

“My brother and I used to hear bumps and thumps in the night,” said Shank, telling tales of hangers flying across the room, disembodied voices and apparition sightings.

He also recounted a story of a neighbor who stayed the night and saw an apparition.

Shank and his mom ended up running the place until 2008. Now, he and his wife Wendy take care of the small business, which seats 58 inside and 35 outside on an attractive patio located at the side of the building.

Business was brisk over the years, and Shank’s became known not only for cold libations, but also for good, and sometimes, unfamiliar food. The businessman wasn’t shy about stepping outside of the Marietta comfort zone and taking risks, starting with tacos that he discovered during his Navy days in California.

“Back in the late ‘60s, people hadn’t heard of tacos around here,” Shank said.

Then came such additions as sushi, pho and microbrews. Bands played at the place four nights a week, and everything went along swimmingly—until COVID hit.

“Everything came to a screeching halt,” Shank said. “We lost close to $3,000 in food that we had prepared for St. Patrick’s Day. So, I ended up giving it all to the food banks.”

The tavern then shut its doors for 14 months.

“I’m very lucky because this place was paid for a million years ago and not having a mortgage is a real big deal,” Shank said.

When he finally reopened, he decided to pare his menu down to one page due to the labor shortage.

“It’s still going well though because people are so happy that we’re back,” said Shank, naming a few of the food items offered, like burgers, soups, flatbreads and salads.

Few are happier to have Shank’s reopen than Kaylee Schofield and Nathan Zaccarelli, who live about 10 minutes away in Bainbridge and have been visiting the tavern for six years.

“We think the place is phenomenal,” said Nathan, adding that his favorite item to order at Shank’s is the beef on weck, a sandwich originating from Buffalo, N.Y., that features roast beef on a kummelweck roll.

For Kaylee, it’s the turkey pesto flatbread. More important to the couple, though, is the friendliness of the tavern.

“It’s cozy and warm and feels like home,” said Schofield. “We especially like the staff. They are extremely welcoming and know us by name.”

That’s music to Shank’s ears, since he wants everyone to feel that way.

“I’m glad I now realize what a wonderful tavern this is, and I appreciate its rich history,” he said. “It has always been a place to serve friends and weary travelers. It’s not a Friday’s, it’s not a Wild Wings, it’s not a pool bar. It is what it is—a cool, neighborhood tavern.”