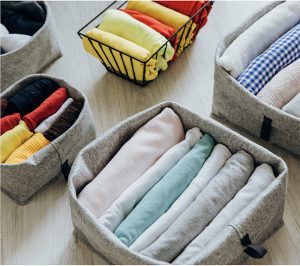 Stacy Schroeder was lying in bed one night, unable to sleep because of all the home organizational projects on her mind.

That’s when she had a lightbulb moment.

“I literally posted one little Facebook post, probably around 10 p.m., that said, ‘Hey, is anyone else interested in joining a Facebook group focused on getting our homes and projects organized?’ When I got up the next morning, there were probably 50 responses,” Schroeder said.

That morning, she created Project 10, a private Facebook group, as “an accountability group for people who want to work on purging or organizing their possessions and commitments.”

The ground rules are pretty simple. Members make a list of 10 projects they’d like to accomplish throughout the year, and then share the list with the group—for accountability and advice. The goal is to tackle one project a month, with two extra months of grace.

Schroeder launched the group with about 75 friends, but over the past few years that number has doubled to 150 people who hail from central Pennsylvania and beyond.

“I was initially surprised at the response, but as I thought about it, I actually wasn’t surprised there were so many people feeling the same way,” Schroeder said.

Members have downsized, moved and cleaned out closets, cabinets and clutter. Some are simply getting their households organized. Others describe themselves as minimalists. They share “before” photos for ideas on how to tackle projects, then “after” photos to share success with the group.

Schroeder is quick to point out that she’s no Marie Kondo—perhaps the world’s most famous downsizer—but she recognizes the value of trying to stay organized. She admits that her home office is a place “where things tend to pile up.”

“They say a messy desk is the sign of a creative mind… but when a place is not cluttered, there’s a peacefulness,” said Schroeder. “Staying organized is about finding a system that works for you and then maintaining it.”

The new year is a natural time to establish new habits, and Schroeder offered words of advice for anyone who finds home organization overwhelming.

“Pick a part of the house that has the most impact on you emotionally or functionally and make that your priority,” she said.

Project 10 came along at just the right time for Ilona Burd. Recently divorced, she faced a daunting task: cleaning out her 3,200-square-foot Dillsburg home of 22 years and downsizing to a new Carlisle home half the size, where she’d also adjust to living alone.

The group helped her evaluate whether she really needed numerous pots and pans of the same sizes, “20 mugs for only me,” and clothing that no longer fit. The answers were all a resounding “no.” She established a sorting system for trash and donations.

“Downsizing and decluttering was freeing for me because it makes cleaning a lot easier—I do not like to clean,” Burd said. “I think it’s easier as you get older, to simplify and let go of things—to accept that you can’t keep it and take it with you.”

Still, it was an emotional process at times.

The hardest task was downsizing a collection of Delft porcelain that connected to her Holland-born father’s heritage.

“I cried as I did critical thinking about whether I really needed all of them,” Burd said. “That was hard, but I felt good about giving some of the pieces away to people who would enjoy them.”

The end result? Her collection shrunk from five boxes to just one, plus a handful of especially meaningful pieces displayed in her new home.

“I think of my daughter who has her own personal life,” Burd said. “I don’t want her to have to deal with all of this. It was making life easier, not just for myself but for family.”

Now, she keeps an ongoing “giveaway box” in her garage as she continues to downsize. The daily task of checking the mail is made easier by keeping a recycling container in the garage for junk mail. That way, she doesn’t bring it into the house. And she keeps a bin by the front door to corral her umbrella, shoes or shopping bags—items she has in her hands as she enters her home.

“It’s been really fun, to see her growth, not being attached to things anymore,” said Amy-jo Humpton, Burd’s friend and fellow Project 10 member.

Humpton, who lost her husband to cancer several years ago, also found support from Project 10 members as she reorganized her Lemoyne home.

“Sometimes, we keep things for the memories, because we feel guilty about throwing things out or donating them,” Humpton said. “But if you have a minimal amount of stuff, you’re living more in the present.”

Having Project 10 friends who weren’t emotionally attached to her things helped Humpton with the decluttering and downsizing process.

And now she’s sharing the skills she’s learned. She’s teaching her daughter how to keep her room clean, in the hope that those organizational lessons become lifelong skills.

“I’m also taking the opportunity to help my mom clean out her house,” Humpton said. “It’s another way of connecting—throughout the process, she has stories to share.”

For more information about Project 10, contact Stacy Schroeder via email at stacy.l.schroeder@gmail.com.