Front cover of “The Ship and the Jungle”

It became a recurring theme for Dr. Darius Walker’s two kids to ask for a bedtime story. He would easily give in, taking his family into worlds with pirates, heroes and adventures through the narratives he told.

Walker soon decided that he might as well share these stories with other families. He started recording the nighttime tales he told his children and, eventually, translated them into a book, “The Ship and the Jungle.”

“I didn’t see a lot of positive books of Black Americans,” he said. “That inspired me to create something that my children can see themselves in.”

Walker grew up in Harrisburg’s Allison Hill neighborhood before moving to Susquehanna Township, where he lived until he moved to Atlanta for college. From there, he went on to attend the University of Colorado and receive his doctorate degree in biophysics and genetics. Walker eventually moved back to Harrisburg, where he met his wife, Dr. Amy.

The Walkers now live in Qatar in the Middle East, where he works as the director of innovation and commercialization at Weill Cornell Medicine-Qatar, a branch of Cornell University.

He’s a science guy, but he said that his children were the reason he considered becoming an author. 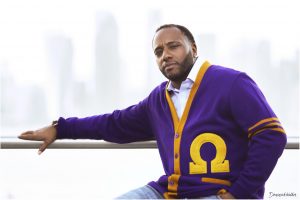 Walker, his wife and their two children, Kherrington and Toussaint, are the main characters of “The Ship and the Jungle.” The story follows the family on an accidental trip to a mystical island, where they must undergo challenges in order to return home.

Walker said that he wanted to highlight a Black nuclear family, positive imagery he believes is lacking in mainstream culture. The book also touches on themes of teamwork, anti-bullying and overcoming obstacles, he said.

Since publishing the book, Walker was able to partner with local friends to distribute some of them to children in Harrisburg. Even adults and teenagers have read the book, he said.

“It’s been really rewarding receiving pictures and endorsements from young people and adults,” Walker said. “That’s what it’s all about, seeing that these youth are being inspired and that they can see themselves in this book.”

“The Ship and the Jungle” took four years for Walker to complete, as it was his first experience writing a book. Walker hopes to write a follow-up book to his first, in the future.

Illustrations for the book were created by Flyland Designs in State College.

“The Ship and the Jungle” is best suited for children 5 to 12 years old, Walker said, but is a good read for all ages.

“It’s a book that everyone can enjoy,” he said.

To order “The Ship and the Jungle” by Dr. Darius Walker, visit his website.