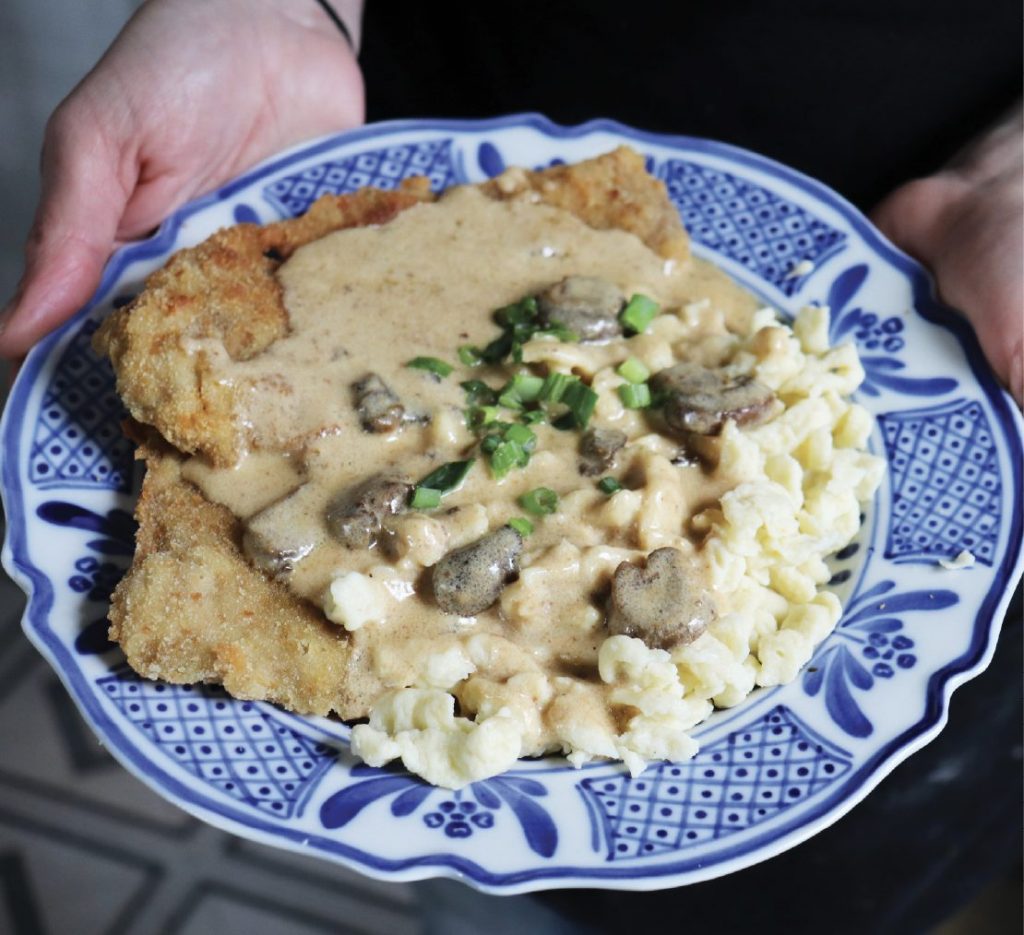 Josie’s German Café & Market is a place that I’ve passed many times.

It’s easy to overlook. The humble yellow abode sits back off the street, its presence announced by a simple sign that appears to have been almost an afterthought.

I learned about the food they serve at Josie’s quite by accident by virtue of having some rare extra time on my hands while meandering around the Mechanicsburg area.

As I approached the door, I read a sign asking would-be diners to call ahead for seating. Fortunately, I was more curious than hungry, so went in to check out what seemed like an intriguing find.

Once inside, I browsed a selection of food merchandise, all of which hailed from Germany: coffee, vinegar, hot mustard, cookies, jarred red beets, mustard pickles, gherkins, canned herring, noodles, chocolates and more.

As I made my way into an adjacent room, the focal point was the deli case full of German specialties like bratwurst, weisswurst and liverwurst. Then there was the blood sausage and headcheese—neither of which I’m likely to try. For those unfamiliar with headcheese, it has been described as “meat jelly” from the head of a cow or pig and served in aspic. Not for me.

As I pondered these things, a friendly man emerged from the back and asked if he could help me with anything. So, I decided to satiate my curiosity about the restaurant, asking him if it was open.

“Yep, best German food in the area,” he claimed.

I learned later that Josie’s owners are Ashley Larew and Stephen Keslar and that the shop has been operating for over three decades, thanks to Josie Keslar, who was at the helm for many years.

Larew said that her husband worked with his mom at the shop since the tender age of 10.

“He’s carrying on her legacy now and uses all of her recipes,” said Larew. “Adding a restaurant to the shop was his idea.”

Larew describes her customers as coming from all walks of life, and she sees quite a few older, German customers. Operating a business during COVID is generally no small feat, but, according to Larew, it has been a positive experience for the couple.

“This has been one of our better years as new customers become more focused on small businesses,” she said. “So, it has worked out well for us.”

When I arrived home that day, I asked my husband (a Metzger) if he felt like indulging in a little German cuisine and, of course, he was game. The man has never met a brat he didn’t like—pronounced “brought” by the way, in case anyone gets any ideas.

We chose a table in the room adjacent to the deli, in the shadow of a picture of the famous Neuschwanstein castle. There, we perused the menu offerings, which included dishes like sauerbraten, goulash, rouladen, Bavarian pork roast, jägerschnitzel and a sausage plate comprised of bratwurst, weisswurst and knackwurst.

I was geared up to order the Bavarian pork roast—that is, until I was informed that they were out of the popular dish. That unexpected push carried me out of my comfort zone and into the jägerschnitzel, a dish described on the menu as “tender pork cutlet breaded and pan fried with a white wine cream sauce made with fresh mushrooms and served with spaetzle.”

My husband decided on a cubed beef dish braised with onions and spices, finished with red wine and served with spaetzle and red cabbage, known as Hungarian goulash.

Pretty soon, we heard pounding in the back as the schnitzel was being freshly made. About 15 minutes later, we were digging into our respective entrees.

The jägerschnitzel was delicious and a far cry from being bland, as I feared, and the spaetzle was reminiscent of the rivels I make for chicken corn soup, but lighter and flatter. Each one was coated with a rich, heavenly mushroom cream sauce that I won’t soon forget. The pork was tender and moist, and the breadcrumbs that covered the cutlets were light and crisp, not dissimilar to panko. My husband enjoyed the authentic goulash, which tasted of wine, onions and paprika.

I wished I could have kept eating, but, eventually, I gave up and took about a third of the generous dish home with me. If I had saved room, I would have been tempted by the variety of desserts like Black Forest cake, apple strudel, plum cake and peach torte.

Cara Bordner is another satisfied customer, a transplant from Michigan who now lives in New Cumberland and was once stationed in the army in Germany.

“My mom found the place and would stop in often and visit with Josie,” said Bordner.

She now visits with her son, whose favorite is the currywurst. She said that, over the years, she’s taken well-traveled guests to the eatery, and they’ve attested to the authenticity of the food. She also keeps returning for the rapport.

“If you are a repeat customer, they call you by name, and you always feel welcomed,” she said.

As for me, I’m glad I wandered off the beaten path to try something other than the pork roast. I am looking forward to returning, and I’ll be hard-pressed to have anything other than that delicious jägerschnitzel. That is, unless they are out of it, in which case I’m perfectly willing to be steered in another direction.