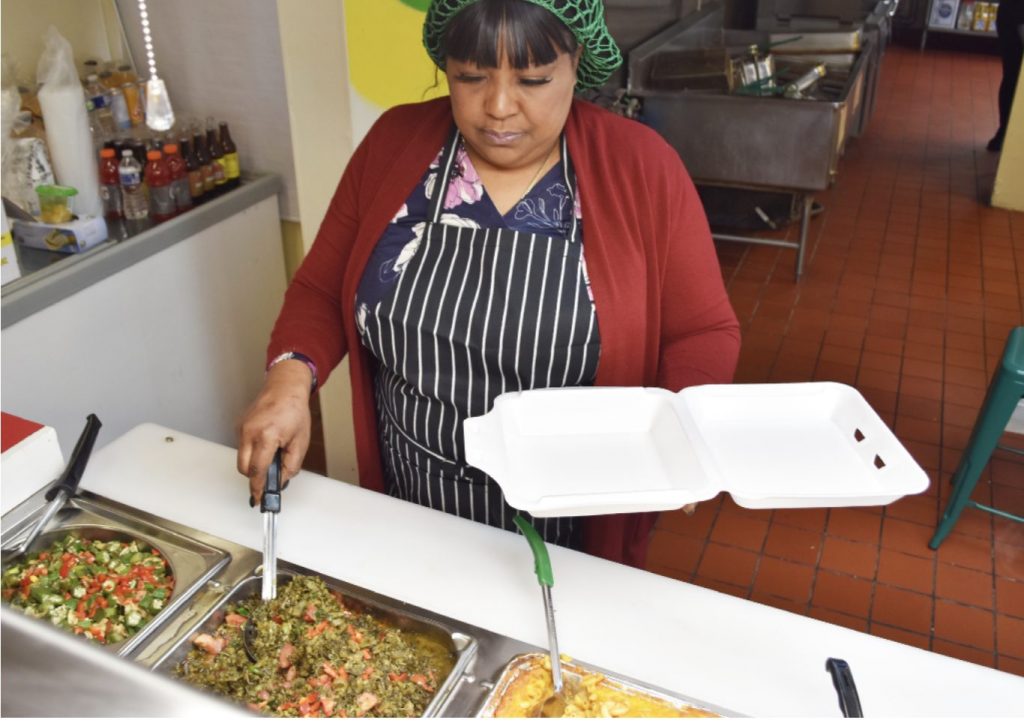 Nadine Graham grew up in a big family, which meant lots of cooks in the kitchen. While it was a necessary daily task of feeding the many family members, it was also a time for bonding.

Graham’s parents were at the helm of it all, teaching her and her siblings how to make the traditional dishes of their home country—Jamaica. The crew cooked for their community, including local politicians and business people. Graham’s father also owned a successful bakery.

The days of cooking with her family in Jamaica may have long passed, but, if anything, Graham has only spent more time in the kitchen in the years following her move to the United States. She’s cooking up those same Jamaican dishes, but for a different community.

Porters House, Graham’s Caribbean restaurant, a long-time Broad Street Market vendor, has expanded. The business now has its own standalone restaurant in Uptown Harrisburg, and Graham couldn’t be prouder to see her dream come true.

After moving from Jamaica to New York to Harrisburg, Graham realized that authentic Jamaican cuisine was hard to come by in the area.

She set out to change that, opening Porters House in 2012, at a time when there were only a few other vendors in the now-packed market.

“This is the overall most authentic Jamaican restaurant from here to Philadelphia and Baltimore,” she said.

Graham grew to love the market, making friends with regular customers and fellow market vendors. But she had a dream of growing her business and owning a restaurant, like her dad had with his bakery in Jamaica.

In December, she opened Porters House on N. 6th Street, painting the roof with the colors of the Jamaican flag. The inside of the restaurant is just as colorful. Palm trees painted on the walls give it a Caribbean feel, making even the winter months feel tropical.

At the counter, customers will recognize dishes from the market stand. There’s fish, jerk shrimp, chicken soup, oxtail and beef patties, among other items. Graham’s keeping some foods, like soup specials, exclusively at the market to encourage customers to visit both locations.

Simpson comes from a Jamaican family, and his father owns a Jamaican restaurant in Philadelphia. He discovered Porters House while studying at Penn State University and quickly became a regular. It gave him a taste of home.

“It’s rare that you find somewhere where you really enjoy the food,” Simpson said, referencing how hard it was to find quality Jamaican cuisine in the area. “She really stays true to selling a variety of items. She carries the same or more than places in New York would carry.”

Over the years, they became friends, and Simpson admired the way Graham cared for customers. He recalls sometimes even seeing her give food to those in line who couldn’t afford a meal.

“She sells food, but she loves people,” he said. “She has a beautiful heart, and you can taste it in her food.”

Days are long for Graham. She gets up at 4 a.m. to pray and watch the news before work begins at 7. She’s cooking and interacting with customers all day, she said. But she loves it.

“I’ll cook in my sleep,” she said. “If I’m not at the market or cooking, I get depressed. It’s therapy for me.”

When Graham’s father passed away a decade ago, cooking was what got her through. She was depressed for seven years, and seeing the bakery that her father put so much work into close down made it even harder.

But she kept moving forward, knowing how her father would feel seeing her succeed.

“He would be so ecstatic,” Graham said, with tears in her eyes. “He would be very proud.”

After securing the building, once a KFC and later Kennedy Fried Chicken, it took a year of hard work to get the restaurant open. It was taxing, and Graham had her doubts that it would ever open.

But sitting at a table in the restaurant on a Monday afternoon, Graham said that she felt like she had finally made it.

“This project took a lot out of me, and I felt like walking away,” she said. “It’s only up from here. It’s like a dream come true.”

Employee Geneva Hill has seen how Graham has not only succeeded in business, but in creating a welcoming atmosphere for staff and customers.

That’s what keeps Graham going through the ups and downs of business—the people. She loves the cooking, but she especially enjoys the one-on-one conversations with regulars and first-timers alike.

For Graham, it all comes back to family. She hopes that Porters House will survive her and be there for her children and grandchildren to visit. She’s already in the kitchen with her young grandson, teaching him to cook, like her family in Jamaica used to do.

“I want to leave a legacy for my children,” Graham said. “Food always brings family together. Food is the stuff of life.”