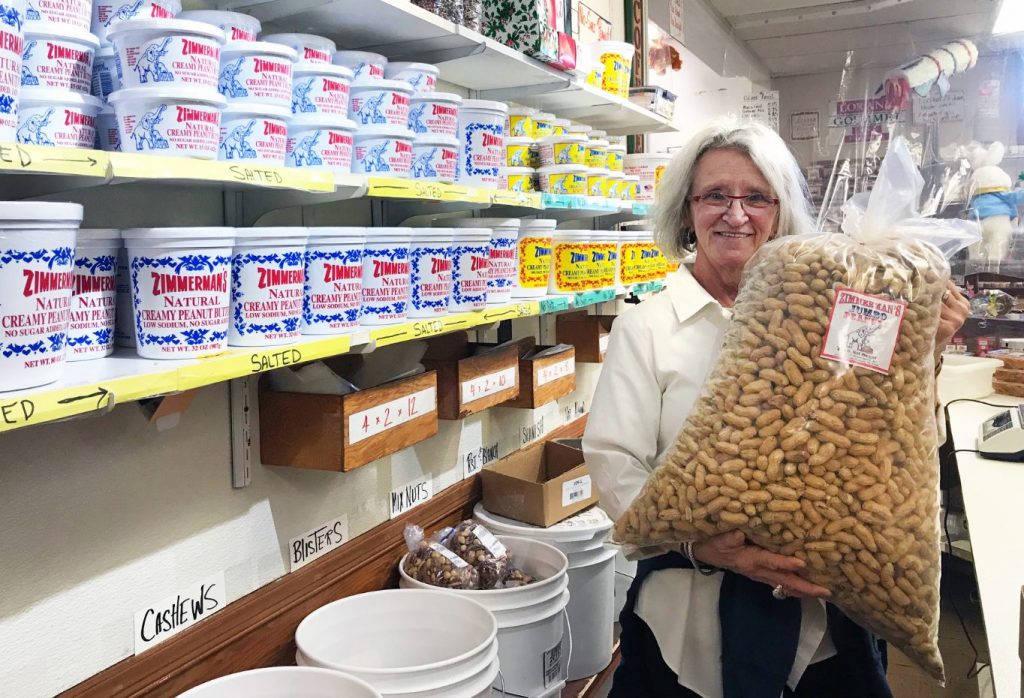 If you’ve lived in the Harrisburg area for any length of time, you’ve likely heard of Zimmerman’s Nuts & Candies.

I have memories of shopping there with my health-conscious mother in the 1970s when she wanted to purchase their sugar-free peanut butter and all I wanted was everything else in the place. In our house, candy was pretty much forbidden, except for the Goldenberg peanut chews that were doled out meagerly. I have a big bag of them in my freezer today and still only allow myself a few a week—old habits die hard.

When I visited the shop in late February, I was surprised that it looked so much smaller than I remembered, but then again, doesn’t everything seem bigger when you’re a child?

Zimmerman’s Nuts & Candies is one of those rare family-owned businesses that has been operating for more than a century.  In 1915, John S. Zimmerman began selling candy and homemade peanut butter in his Penbrook general store.

Over 100 years later, Lee S. Zimmerman heads up the operation, along with wife Donna and children Olivia and Christopher.

“My grandfather, who was orphaned as a teen, was adopted by Charles Fishburn, a local merchant who owned a feed mill and would roast corn and coffee,” said Lee, adding that John eventually began roasting coffee and peanuts and making peanut butter.

The store itself hasn’t changed much over the years, though tastes have.

“Over the years, the dried fruit and nuts didn’t support us, so we started adding confections like the Asher line, Swedish fish and other candies,” Lee said. “In the past, spiced jelly beans would also be a huge hit. Now, kids tend to go for the sour flavors.”

The shop is small but big on variety, from the aforementioned peanut butter to nut butters, coffee, dried fruits and a large variety of candy, like gummies in all shapes and sizes, ranging from Haribo bears to frogs and even octopi. Retro selections include items like teaberry gum, malted milk balls, Dum Dum lollipops and Cella’s chocolate-covered cherries, to name a few.

A selection from Lewistown-based Asher’s chocolate is on display in the case up front and includes items like salted caramels and almond bark. And if you know someone who is eschewing sugar, let them know that they will find a selection of sugar-free items at Zimmerman’s.

Those who enjoy making sweet treats during the holidays may be interested to learn that Zimmerman’s carries high-quality confectionery bars and disks made by well-known chocolate purveyors Wilbur and Merckens. An entire wall is dedicated to extracts to add to that homemade candy.

The family stays up to date with trends by making a series of their own items with chocolate as a base. Popular selections include a product called “Pudge,” made with white chocolate and peanut butter, pistachio clusters with dark chocolate, “Rocky Roads” crafted with pure milk chocolate, pretzels and marshmallows and “Harvest Bark,” containing two kinds of pepper, pumpkin seed and sunflower seed.

“We use chili powder, chipotle and a little bit of cinnamon to bring it down,” Lee said.

When I asked Donna what she likes about the business, she laughed, jabbed me in the arm and said, “I run it!”

With a chuckle, Lee agreed, adding that there’s something new to do every day, which keeps the job interesting. The entire family seems to enjoy the relationships they’ve cultivated with their customers.

“We hear the stories about how grandmothers and mothers brought their children and grandchildren to the shop, and that’s nice to hear,” Lee said.

Sue Pera, owner of Cornerstone Coffeehouse in Camp Hill, is a proponent of supporting small businesses. She said that her family has been patronizing the establishment for decades.

“I buy BB Bats, Mary Janes, their peanut butter, and I just love their extra-large, salted premium cashews,” she said.

“We buy through them, and they’ve always been so nice,” she said.

The couple’s children said that their parents told them that they were free to choose whatever career path they wanted and that they never felt pressured to work at the family business.

“From childhood, we knew we were staying,” Olivia said. “And I think, for my brother and me, we always had many interests outside of work that we would pursue, with the goal of intertwining them with our family business to improve it.”

She added that she is creative with the chocolates and enjoys the everyday business operations, while her brother, Chris, is mechanically inclined and loves processing and producing.

“We are both ‘makers’ whose interests and skills complement each other,” she said. “He’s the nuts, and I’m the candy.”

The siblings confirm that the camaraderie is one of the best parts of the business.

“People shop happy,” Olivia said. “They talk to each other. They run into friends and acquaintances, and they leave content. We view them not just as customers, but as people. And we genuinely appreciate them.”

We Re-Built This City: Harrisburg hasn’t experienced this much development in a century. What’s driving the trend?

Dreams Don’t Wait: Despite a year of the pandemic, many small businesses chose to open up shop