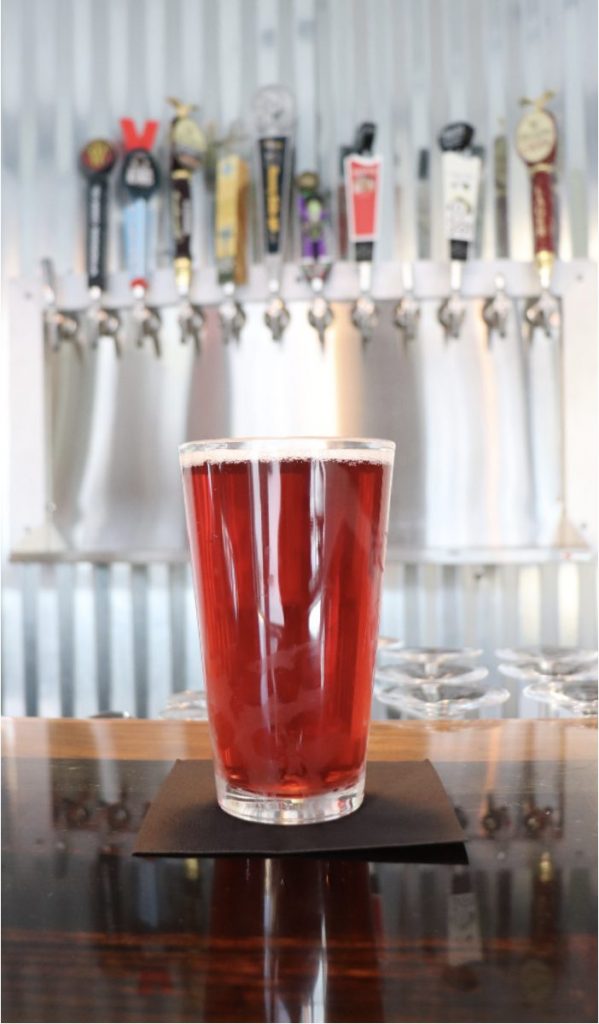 Matt Flinchbaugh is the consummate entrepreneur.

Some customers may know him from his electronic dog fence company, Pet Stop of Central PA. More may be familiar with Flinchy’s Restaurant, Bar and Deck, which, for years, has been a popular meeting and eating spot for locals. And still others know him as the owner of Home Slice, a popular pizzeria located in Mechanicsburg’s Walden community.

That would be a full plate for most people, but Flinchbaugh has embarked on yet another endeavor. In November, he opened the High Road Brewing Co. taproom on a prominent corner across from Home Slice.

“My better half told me that I wasn’t allowed to open any more businesses, so this wasn’t necessarily a ‘want,’ or something I was trying to do,” Flinchbaugh said. “It just happened. I knew how much of a draw a taproom would be for the community.”

The snug space, which has housed two taprooms previously, was practically turnkey, which was an attraction.

“We added televisions and painted a bit, but that was it,” Flinchbaugh said.

Flinchbaugh plans to unveil a large brewery and restaurant for High Road later this year in Camp Hill. But, to start out, he opened this small taproom, which features IPAs, pilsners, lagers, stouts, etc., from a variety of area breweries.

In addition, Yuengling is always available on tap, along with selections from Tröegs, some of which are seasonal, like Mad Elf and Blizzard of Hops.

Flinchbaugh also plans to use a one-barrel system as an experimental brewery.

“The one-barrel system enables us to get really creative with new beers and think outside the box,” Flinchbaugh said. “Plus, if we have a ‘whoops,’ it won’t be so painful.”

The taproom also offers Pennsylvania wines, seltzers, ciders and various cocktails made with local spirits from places like Dead Lightning in New Cumberland and Faber Distilling Co. in Trumbauersville. A popular cocktail is one that Flinchy’s denizens may recognize.

The ultimate mission is to make High Road a community hangout, which, according to customer Matthew Dishner of Mechanicsburg, Flinchbaugh knows how to do.

“That was the purpose of having a corner establishment, but up until now, no one could quite hit it,” he said. “Matt had the perfect vision—a simple taproom for neighbors and the community located in a quiet, relaxed atmosphere where you can feel comfortable.”

Running several businesses during this time hasn’t been easy. Flinchbaugh, like most business owners, has suffered from the repercussions of the pandemic.

Yet he felt the need to give back during that time, working with other restaurants to donate food to first responders and charities.

“We, as restaurateurs, are all one big family,” he said. “I learned that as we worked together for the Leukemia and Lymphoma Society in 2016, when restaurant employees chose a night to donate all of their tips to the cause.”

Brian Fertenbaugh, owner of Café Fresco in Harrisburg, said that he sees a bright future for High Road.

“Matt has a vast amount of experience in the industry and has proven to be a success at other locations, plus he’s always supportive of the community. So, I understand why Mechanicsburg is welcoming him with open arms,” Fertenbaugh said. “He’s also proven that he can add a lot of variety and taste to Walden. So, I think everyone will recognize what a valuable asset this is for all of the residents.”

Flinchbaugh’s ambitions for High Road go far beyond the small taproom in Walden.

Later in 2022, he plans to open a brewery and restaurant in Camp Hill at a Smith Land location on Market Street. It will feature a menu with small plates and shareable foods with indoor dining on three levels, a two-sided bar with garage doors that will open into the restaurant, as well as a mezzanine on the third floor and outdoor dining.

“It’s going to be family-friendly, with fire pits outside and will seat 150,” Flinchbaugh said.

As for what his wife Lindsay thinks about the Camp Hill project, he chuckled.