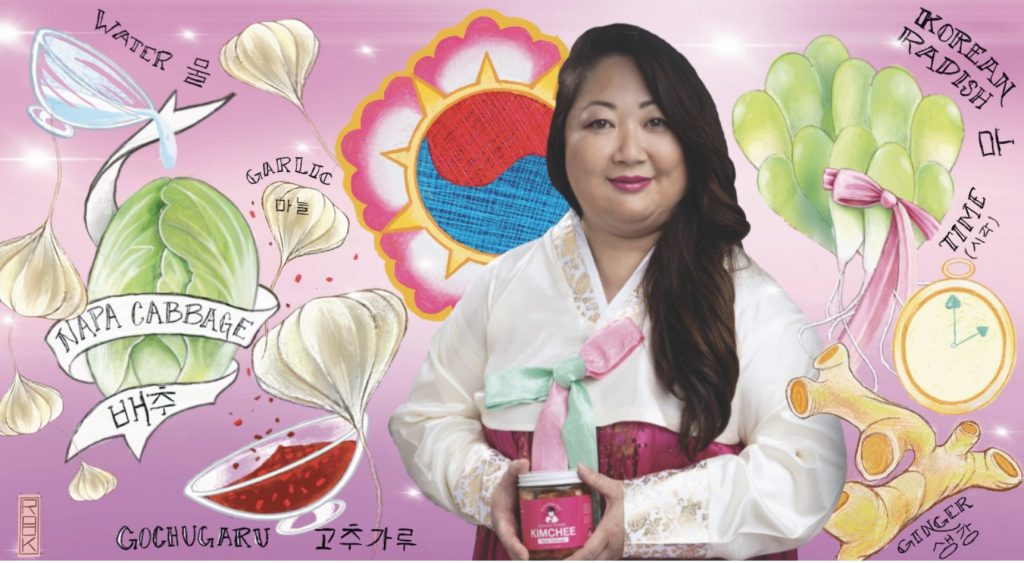 “I started my food company by accident,” said the owner and chef behind Kimchee Girl authentic Korean food.

A former makeup artist, a lifelong resident of the Harrisburg area and the first of her Korean family to be born in the United States, Park Williams could not find kimchee—a 3,000-year-old fermented Korean dish—that rivaled her mother’s.

“Growing up poor, we grew everything,” she said.

She recalled making “hundreds and hundreds of pounds of kimchee” with her family. But in her house, her parents had no recipe; they made it to taste.

After her mother passed away from cancer, Park Williams realized that she needed to find a way to replicate the delicious food she’d grown up with. So, she carefully studied and documented her dad’s kimchee techniques until she felt the recipe matched the taste of her mom’s cooking. Now, she had pounds of kimchee filling her fridge.

In May 2021, she filed the paperwork to become a legal business. Now, you can find Joyce Park Williams and her blazing pink tent all over central PA. And while kimchee, the dish she makes with only a handful of ingredients, is her specialty, it’s usually her other dishes that draw a crowd.

Customers follow the smell of Korean-style barbecue ribs, bone-in pork chops and bulgogi wraps with marinated beef. It’s common for people to come back for seconds. Park Williams lights up when she talks about customers enjoying her food.

She believes in the power of food to connect us to each other and to the ones we love.

While she tries to locally source as many ingredients as possible, buying from places like the PA Open Air Farmers Market on Cameron Street in Harrisburg, her ultimate goal is to find a farmer to grow her food and to get her mom’s kimchee into supermarkets across the country.

Already through her online shop, she sells kimchee to people in states as far away as California who want a taste of the food that “has four times the probiotics of Greek yogurt” and won’t go bad for years.

“I want kimchee to be as common as ketchup,” she said.

And with her kimchee now sold at five different outlets across Pennsylvania and Maryland, including Cornerstone Coffeehouse in Camp Hill, she’s doing her best to make that happen.

Though there are hundreds of varieties of kimchee, Park Williams makes hers stand out by making it vegan (without fish sauce) and by donating a portion of every Kimchee Girl sale to a local person battling cancer.

Around Christmas, she and her husband, Kevin, dress up as Santa and Mrs. Claus and take gifts, gift cards and money for treatment to a patient or their child who needs it.

“[Cancer] is expensive,” said the survivor of uterine and breast cancer who wants to give back as much as she can.

Soon, along with its pop-up, Kimchee Girl with have a more permanent spot at the new indoor farmers market in Hershey, where kimchee will be served along with their other classic Korean dishes. She is looking forward to sharing her food with even more people.

“It’s very joyful,” she said. “Food is really the fabric of our life.”