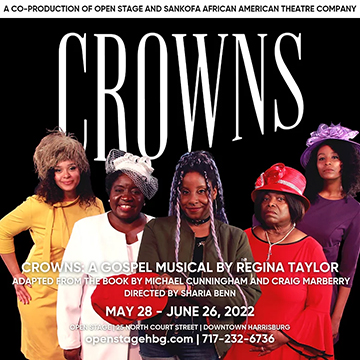 An off-Broadway production by Regina Taylor, Sankofa African American Theatre Company’s “Crowns” is more than a hats-off to an icon of the cultural experience that is the Black church. “Crowns” is a high-energy, foot-stomping, clapping, hum-along gospel musical that will have you fanning yourself once it heats up the house.

In this fish-out-of-water story, we first meet our protagonist Yolanda (Jasmine Graham), who has been transplanted from Brooklyn to South Carolina to live with her grandmother, Mother Shaw (Regina Gail Malloy) after the murder of Yolanda’s brother, Teddy. Yolanda wears Teddy’s red baseball cap in remembrance of him.

Although this is the main plot, a secondary story emerges as a frontrunner–the tradition of Black church hats and the strong women who wear them. These same women embrace Yolanda as an extension of the larger church family.

“Crowns” unfolds in vignette form, rotating narratives between characters. The hats become the vehicle for telling the story, which isn’t so much plot-driven as it is an archetypal study. The narratives bring out a microcosm of Black church archetypes situated around their hats, a veritable pecking order of the First Lady pastor’s wife, the Elders and on down the line.

These women treat church as an important event. They stress looking your best to go meet the King, imparting an involved set of “Hat Queen Rules” to strut their “hattitude.” Church hats are a competitive status symbol, setting an example of modesty, hearkening back to wearing headdresses worn in the fields and to African women adorning their heads. Hats are a connection to becoming one with all that was and ever will be.

The sternest (and funniest) delivery of the rules comes from the pastor’s wife, Mabel, (Diane Hetes), who would sooner lend out one of her children than to lend a hat.

Executive Artistic Director Sharia Benn invites us “to hear stories about our culture that center, uprise and uplift communities, with a goal to educate, to be real about the issues that confront us.”

As part of our education, we learn that the tumultuous Civil Rights movement led to hats falling out of everyday fashion. But they are a must for special occasions. The hats we wear to weddings and funerals carry the history of the milestones in our lives. We find as much joy as we do sorrow in the tapestry of the hats themselves. The hats represent sacrifices, becoming cherished family heirlooms the ladies pass down before they pass on.

The hats become personified, whether they are nodding approval, flailing with the Holy Spirit, or swaying to heavenly hymns—28 hymns, to be exact. You would find any song in the score of “Crowns” in any church with threadbare hymnals with yellowed parchment pages.

In no definitive order, these are the standout songs:

All the cast collaborates in the rollicking “Battlefield” and “Yonder Come Day,” the latter of which is a dance-in-the-aisles song to get converted to.

Like a cross between a funeral dirge and a jazzy nightclub, “Wade in the Water” is an outpouring of love by the entire congregation for one mourning parishioner. “Take My Life and Let it Be” has such lovely harmonies, and the cast sings all the verses. “I Got a Crown” and “Amen” are two hymns that pull your emotions from the floor up.

Velma (Latoya Dallas) belts out the classic, “His Eye is on the Sparrow,” with a look and style reminiscent of Whitney Houston from her early career. The arrangement is beautifully unpredictable.

Jeannette (Breanne Sensenig) sings a touching rendition of “Take Me to the Water,” sporting eyelashes thicker than the velvet on her Bergère hat.

For a woman of a certain age, Malloy has some pipes to match her glamorous hats, delivering solos “In the Morning” and “None but the Righteous.”

Although the poster would have you believe differently, there is a “Man” (Steven Ross) in “Crowns.” He sports a fedora and intones his bass range in “Mary Don’t You Weep.”

I tip the brim of my own black feathered hat to the talented cast, whose singing blew me away. My only tiny issue is that the two-hour show has no intermission. (This old church lady needs one.)

My plus-one and I wore our own church hats to the opening night of “Crowns,” sitting in the front row for the full experience. I stand at about 5-foot-nothing, so I doubt I blocked anyone’s view. Director Sharia Benn said to us, “You’re gonna be all up in it performing, just like church.” Worry not, dear readers. My vocal competence lies somewhere between the caterwaulings of Yoko Ono and Ethel Merman with a head cold, and I would never do anything to publicly embarrass TheBurg.

Even if you don’t own a hat, or (like me) “only have one hat because I ain’t got but one head,” the theater will still welcome you. In the words of Mother Shaw, you can strut yourself on in.