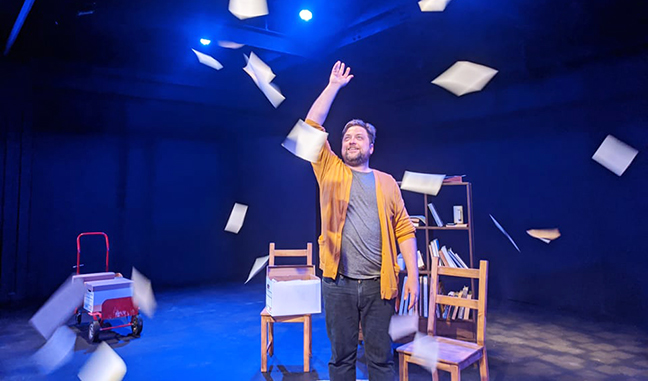 Stuart Landon in “Every Brilliant Thing”

If you could list all the brilliant (think British: superlative) things that bring you happiness, what would you list? What kind of order would you put them in? And how would you use that list to change your life?

We meet our unnamed list-maker (Stuart Landon) while he reminisces about being 7 years old. The year was 1989—shortly after his dog Sherlock Bones was euthanized, and his mother attempted suicide for the first time. To cope, the boy decides to create a list of the best things in his life. At the top are his favorite foods, staying up past bedtime to watch TV and the unforgettable line, “kind old people who aren’t weird and don’t smell unusual.” Landon even chooses a good-natured couple from the audience to play them.

Some of the boy’s brilliant list items are random, and others help his coming-of-age story to flow seamlessly. The list items become a little more grown-up as he matures, like sunlight, really good oranges, and the smell of old books. As he reaches 1 million, the brilliant things become increasingly specific, and all are charmingly relatable.

The boy tries to share the list with his parents to make them happy. But he learns some things are broken and can’t be fixed.

Upon entering the theater, Open Stage ushers provide little golf pencils and note cards for composing your own brilliant lists, and there’s plenty of alcohol in their new lounge to spark conversations. You will also receive a card with your lines, and you might even score a part in the play without auditioning.

On my own list of brilliant things about “Every Brilliant Thing:”

1. Audience participation. Everyone has a part to play in this show. As a writer, an observer, a former version of me once lived in fear of any audience participation elements. But if this chick can learn to unclench, anyone can. If you’d rather shun the opportunity, we’ll be over here having all the fun without you. And if you feel or look awkward when caught off guard, all the better. If it looks too rehearsed, the audience will suspect a plant.

2. When actors treat their audience like family. Even before the show begins, Landon pulls us into his world. He relays the struggle of performing a one-person show solo, allowing us to observe his vulnerability while he arranges and rearranges the setting.

3. Laughing hard, then crying even harder. I did not expect a play about suicide to be equal parts comedy and heartbreak. I stupidly wore mascara to the theater. I left with black streaks trailing from my eyelashes to my mask.

4. Landon’s facial expressions. For me, watching Landon connect with the audience’s reactions is the best part of the show. His mischievous smile when he talks about all the brilliant things pulls us in to his private jokes, his little secrets, like peeing in the ocean and nobody knows, or how his mother sent him to school with no socks and an empty lunchbox. His pain pours off his face while he sits alone in his father’s study, spinning sad jazz records, many by musicians who took their own lives.

5. Emotionally raw, yet resilient characters. Landon convincingly becomes that exuberant little boy, then that shy young man who can’t bounce back the way his younger self did. Even later, he transforms into a withdrawn adult who’s afraid to feel any range of emotions, boxing up his feelings and distancing himself from his partner.

6. I left the theater knowing a few facts about depression and suicide and with a better understanding of their effects on loved ones. Did you know the media have guidelines for how to responsibly report on suicide to help prevent copycat suicides via the Werther effect? Me, neither. (Good topic for googling after you finish reading TheBurg from cover to cover.)

When Open Stage planned their season with Pennsylvania’s quarantine status then-unknown, they chose one-person shows for their fall lineup. Landon said, “We found a way to involve many ‘actors’ with goose-bumps and catharsis.”