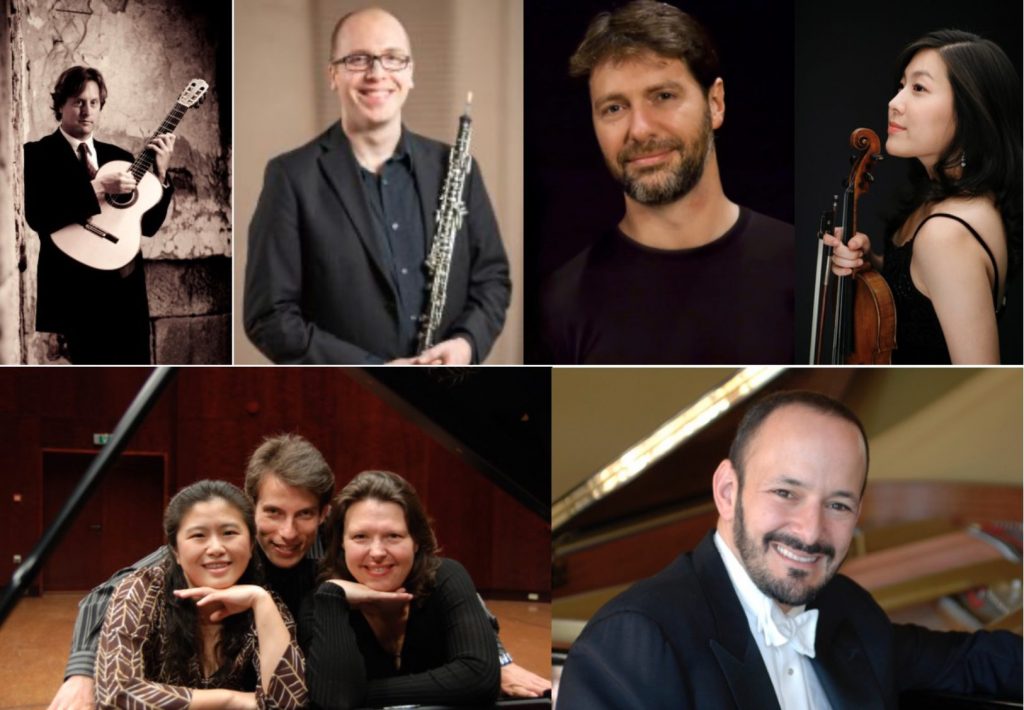 Well, there’s Beethoven and Brahms and baroque and chamber music, cellists, cabaret, quartets and a polymath.

Yes, a polymath. More on that later.

This season is a special one. It marks MSC’s 40th anniversary and, while it’s a big year, co-director Peter Sirotin has plans, as always, to offer central Pennsylvania music-lovers the highest-quality programming.

On Oct. 6 at Whitaker Center, the award-winning Ariana String Quartet will treat listeners with a lighthearted string quartet by Beethoven and a poignant piece by Tchaikovsky, which Sirotin describes as “a gem of Russian Romantic chamber music.” The group will also perform the cross-cultural “Leyendas: An Andian Walkabout.”

“It is by one of the most exciting Latin American composers, Gabriella Lena Frank,” Sirotin said.

The remaining performances, November through April, will take place at Market Square Presbyterian Church. On Nov. 17, celebrated clarinetist David Shifrin, cellist Peter Wiley and pianist Anna Polonsky will perform lyrical clarinet and cello sonatas by Brahms, as well as Beethoven’s own arrangement of his “Septet.”

This November program was originally scheduled for March 2020, but was cancelled due to the pandemic. Sirotin considers it fortunate that MSC was able to reschedule it for this upcoming season.

“Both of these programs (October and November) include works by Beethoven whose 250th birthday celebrations around the world had been muted by the pandemic,” Sirotin said. “Fortunately, Beethoven is as alive and relevant at 251, as he was at 250.”

Sirotin is particularly thrilled about the Jan. 5 concert, when “English Orpheus” will be performed by Tempesta di Mare, a Philadelphia-based Baroque ensemble, which will offer a cabaret on the eternal themes of love, with songs and instrumental music by Dowland, Blow, Purcell and Handel and poetry by Shakespeare. Actors from Harrisburg’s Gamut Theatre will be featured as the theater concurrently hosts the international Shakespeare Theatre Association conference.

“We are always interested in a cross-disciplinary programming, and this is a wonderful opportunity for us to collaborate across art forms, as well as help both organizations to cultivate new audiences,” Sirotin said.

And the polymath mentioned earlier? He is British pianist, composer and writer Stephen Hough, named by several noted magazines as one of 20 living polymaths. He will be front and center on Feb. 15, performing music by Chopin, Schumann and Alan Rawsthorne, as well as his own “Partita.”

By definition, a polymath is someone with wide-ranging knowledge or interests spanning diverse subjects, a type of Renaissance man or woman. In Hough’s case, besides being a leading concert pianist, he is a composer, a recording artist, a visual artist, a novelist, blogger and essayist.

“This concert is a part of Mr. Hough’s artistic residency, which will also include appearances with the Harrisburg Symphony and a master class at Messiah University,” Sirotin said.

“We want to show that not only is chamber music alive and well, but there are incredible composers living among us who are creating imaginative and inspired works full of vitality and cultural relevance,” Sirotin said.

Compositions by Avner Dorman, Jeremy Gill, Robert Pound and Zev Malina will be performed by Grammy-winning guitarist Jason Vieaux, Maestro Stuart Malina and the principal players of the Harrisburg Symphony.

Sirotin, now in his 11th season with MSC, views 40 years as an incredible milestone for the organization.

Founded in 1981 by Lucy Miller Murray, MSC is one of only eight presenters in the country, along with Carnegie Hall, that participates in Chamber Music America’s Cleveland Quartet Award, given to a young string quartet about to embark on the international music scene.

“Ultimately, the organization Lucy Miller Murray created 40 years ago continues to thrive because of the community of dedicated music-lovers and because it embodies the collaborative spirit which is at the core of chamber music as an art form,” Sirotin added.

Finally, MSC will close out its season on April 21 with Stuart and Friends, a program that incorporates Maestro Malina’s favorite works for “piano four hands” by Schumann, Rachmaninoff and Brahms. MSC’s co-director, Ya-Ting Chang, will join Malina at the piano, and audiences will be treated to a vocal ensemble.

Last season, MSC managed to present all of its musical programs live to masked and socially distanced audiences in accordance with regulations. This season, the organization will continue to monitor the situation closely for any changes in state and federal safety and health guidelines and respond accordingly.

Whatever the outcome, Sirotin and the MSC have made sure music-lovers don’t miss a beat.

“Due to popular demand, we plan to continue filming all of our performances next season and offering videos as an option to those who can’t attend in person,” he said.