As a result of the 2020 Census, Pennsylvania has lost one congressional seat in Washington. Legislators in the House and Senate State Government Committees of our PA General Assembly are in the process of drawing preliminary, 17-seat congressional maps now. Whatever map is chosen must pass each house of the General Assembly and be approved by the governor. It will be in effect until 2031.

On Dec. 15, the House State Government Committee passed their version of a preliminary map out of committee and on to the full House for amendments and a vote in January. So what should be done with Dauphin County and the adjacent capital region? As a resident of the county for over 44 years, I believe the General Assembly and the governor should consider the following when drawing and approving the final congressional map. In addition, a public comment period ensuring there is adequate time (preferably 30 days) for public review before approving any final map should be required. 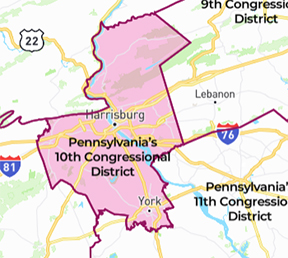 In its 2018 decision, the Pennsylvania Supreme Court applied essentially the same standards that our state Constitution requires for legislative redistricting. The court said congressional districts should be:

“… composed of compact and contiguous territory; as nearly equal in population as practicable; and which do not divide any county, city, incorporated town, borough, township or ward, except where necessary to ensure equality of population.”

The population of each of the 17 new congressional districts created in Pennsylvania for this redistricting cycle is 764,865. Dauphin County has a population of 286,401 according to the 2020 census. Based on population, it is possible to keep the county whole within one congressional district. It should be combined with other counties or areas with similar demographics, concerns, priorities, issues and, if at all possible, should remain whole. 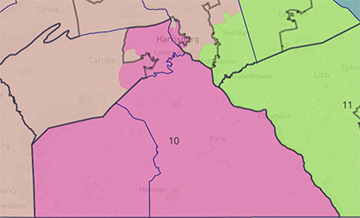 With this in mind, the aforementioned House State Government Committee map has divided Dauphin County among three districts. District 10 is comprised of the city of Harrisburg, the eastern one-third portion of Cumberland and all of York and Adams counties. District 11 comprises the lower one-third of Dauphin and all of Lebanon and Lancaster counties. District 13 consists of parts or all of 11 different counties: upper two-thirds of Dauphin (minus Harrisburg); parts of Union and Snyder to the north; all of Mifflin, Juniata, Perry, Blair and Huntingdon, the western two-thirds of Cumberland to the west; and Franklin and Fulton on the Maryland border. This would seem to violate the requirement for compactness.

The tri-county capital region has become one of the largest warehouse and distribution centers in the country and is the crossroads for the northeast in commerce, rail, trucking, air passenger and freight and general public travel. The major supporting roadways are I-81, I-83, I-78, PA-322, and I-283/ PA-283. The Pennsylvania Turnpike also traverses this area. Harrisburg International Airport is located in Middletown (south of Harrisburg). A common interest in infrastructure, business, commerce, commercial and private development, and environmental concerns exist within this region.

Voting Act Rights requirements dictate that mapmakers strive to retain the voices of racial and ethnic minorities. The urban and suburban voters, along with significant communities of Black, Hispanic and Asian voters in Harrisburg and the surrounding area, are marginalized by combining them with overwhelmingly more conservative and rural areas. Dauphin County has the fourth-highest percentage of African Americans (19.2%) in Pennsylvania after Philadelphia (43.7%), Delaware (22.4%) and Forest (20.8%) counties. In south-central Pennsylvania, the most populous area of people of color is in Harrisburg (over half its residents). As was stated previously, there are significant and growing populations of Hispanic and Asian residents in the area and this trend will continue into the future.

The current congressional District 10 serves as a good example for the new congressional district. It is compact, encompassing the tri-county capital region of Dauphin, eastern Cumberland and northern York counties with similar issues, shared commerce, infrastructure and economic concerns. It has a mix of rural, suburban and urban populations and similar numbers of registered voters of both major parties, independents and other non-affiliated categories. It is also a district with one of the very few “competitive races” in both 2018 and 2020, with both results within 5%. The House preliminary map would create three safe seats for Republicans.

The citizens of Pennsylvania are calling for a map that has compact and contiguous districts. They are calling for more competitive elections that allow their voices to be heard and representatives that truly represent their interests. The new congressional map will influence policy and legislation affecting all Pennsylvanians for the next decade. What to do with Dauphin? The county that is home to the Capitol of Pennsylvania should not be divided. Keep the county whole within one district and keep the district compact and contiguous by including the tri-county capital region. It is imperative that we have the best map possible to represent Dauphin County, the tri-county capital region and our commonwealth in Washington.

Letter to the Editor: Celebrate Clara Barton’s birthday by helping others