Part I: The Men Who Fell to Earth

Scientists from NASA put out the alarm as soon as they heard static on their sonar tracking system thousands of miles out in space. It picked up a devastating, 230-kiloton asteroid that could hit Earth early May or sooner. The odds were one in 3,800 that it would actually hit our planet…but still. NASA readily admitted not all asteroids are trackable, but, with the size of this one, that fact fell out the window. Perhaps the noise could be an identified craft entering Earth’s atmosphere. The Northeast coast was the target, but when and where would be anyone’s guess. As the week wore on, the unknown object became the main topic of conversation with speculation rabid. Whatever would arrive by the workweek’s end was headed straight for central Pennsylvania.

The clock struck midnight as the first day of the month arrived, with a glowing streak shot through the rooftop at the Millworks with such force, finally settling on the third-floor art studios. For the local residents, it was a massive jolt causing the Midtown neighborhood of Verbeke and 3rd to come to life with everyone spilling into the streets to find out what caused this catastrophic collision. A spacecraft glowed for city blocks, emitting a strobe show like something out of “Close Encounters of the Third Kind.” UFOs have always held a certain fascination for the American public, and this one would only serve to advance that notion. When the craft’s doors opened, the Electric Prunes’ “I Had Too Much to Dream Last Night” echoed, the reverb feedback created by the guitars thumping bass line. Art of the Huckle Buckle Boys

As the spacecraft entered the Earth’s atmosphere, it hit a time warp continuum setting the calendar back to 1967, and the occupants within left dazed and confused. As the mothership’s portal swung wide, out stepped Zack Rudy and Garrick Dorsett of Studio 318, Millworks’ very own Huckle Buckle Boys, delivering their out-of-this-world art. “The Men Who Fell to Earth” were none other than comrades-in-arms, brandishing paint and canvas to conquer Earth or at least central PA bringing a fresh palette back with them from their space jaunt just in time for an April 1 arrival. Canvases featuring characters that could easily come from Area 51 showcase optic colors of moondust yellow, Venutian violet, Jovian juniper to include the multi-colored rainbow rings of Saturn. Zack eagerly exclaimed to the onlookers that, “we were off in a dream and went for a ride last night” by the Turtles’ “She’s My Girl,” as Garrick gleefully gushed we even traveled to “Itchycoo Park and touched the sky” by Small Faces. Both agreed, “it’s all too beautiful!”

This blog is delivered in the spirit of the day and all April Fools Day stands for. With a nod to Orson Welles’ Halloween night original broadcast of “War of the Worlds” in 1938.

Look for the unveiling of Huckle Buckle Boys’ room-size mural and beer release collaboration at Spring House Brewery at 209 Hazel St. in Lancaster on May 1. Public invited. 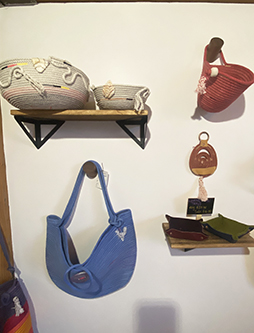 Continuing the theme of out-of-this-world art at Millworks finds “Words of love, soft and tender” as once cooed by Mama Cass, lends credence to Karma Ashanti Love, a crafter of consummate skill with her one-of-a-kind rope bags, bowls and baskets. The business-branding name is derived from the designer’s daughters, “tossed with love at the end. Hand dyed ropes and buttons made of clay, complete the labor-intensive process in delivering the final product to the customer,” shared Erica Binder of Studio 212. 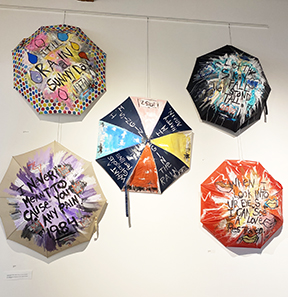 Reina Wooden (R76) makes “singing in the rain” easy-peasy with her message laden umbrellas twirling and swirling on the wall recently in the lobby at Millworks. Decked out in eye-catching colors, the protection from the elements is more than functional and fun when the conversation-starters clamor for attention down the boulevards of Midtown. 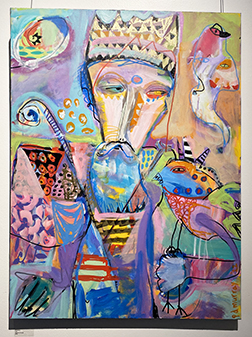 Outsized and outrageously outré iterations that P.D. Murray borrows from The Bard for inspiration, using Shakespearian icons Prospero, Ariel and Caliban from the “Tempest,” King Lear, Ophelia from “Hamlet” and Papageno, Queen of the Night, from Mozart’s opera, “The Magic Flute.” This eclectic group is featured in Murray’s latest array of cotton candy-colored paintings found in Studio 323. Choosing a palette perfect for “Springtime when Man’s fancy turns to thoughts of…” Artist-created libations found at the bar at Millworks, mixed with elan by its in-resident bartender, Roman. Millworks’ artists now have their own signature cocktails available to sip and enjoy. Cheers and happy April Fool’s Day!

“I’m Fine” at Creative York, 10 N. Beaver St. in York, is a community-engaged exhibit of masks and stories dedicated to sculpting mental health awareness through May 21.

Spring Odds One Bizarre is Saturday, April 30, in the parking lot of the Broad Street Market from 11 a.m. to 5 p.m.