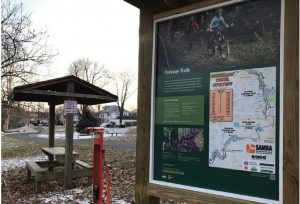 Like many pursuits, mountain biking is sort of an all-or-nothing venture.

If you’re not into it, you may not know a whole lot about the activity. But if you are into it—it’s a sport, it’s a passion, it’s a way of life.

There are plenty of great biking trails in and around Harrisburg, and the local mountain biking community is supported by the efforts of SAMBA.

With some 320 members, SAMBA is very active in Dauphin and surrounding counties, maintaining and designing area bike trails and creating positive working relationships with area land management agencies. But SAMBA supports all area mountain biking activities, not just the ones engaged in by its members.

“You’ll hear people say mountain biking is about the freedom of being outdoors on a bike,” said Nick Loftus, president of SAMBA. “For me, it’s a connection with the outdoors, combining riding and being outside. Some people will tell you it’s an adrenalin rush. For me, it’s therapy, relaxation and recreation.”

With that freedom comes the cost of maintaining the area’s mountain biking trails.

SAMBA has designed, built or currently maintains the Parkway Trail System, located mere minutes from downtown Harrisburg, as well as many others in Lancaster and Lebanon counties. In all, that’s 70 miles of clearing fallen trees, trimming back brush and, sometimes, rerouting.

“The goal for us is to build the trails properly in the first place, so we don’t have to do too much maintenance,” said Loftus. “These trails have a life of their own. It’s an amazing place. Sometimes, a tree will fall, and we love it. We can either clear the tree or keep it as is and ride over it. It’s just the nature of the beast.”

Mountain bikers are a special breed, and so is their equipment. With fat tires, enhanced suspension and elevated clearance, mountain bikes are designed to tackle the tough terrain that riders not only encounter, but seek out. Helmets are highly recommended.

“We’re riding on natural surface trails, with roots and rocks,” said Loftus, a 50-year-old resident of Hershey. “Our bikes need to be built for that purpose.”

Originally formed as a club, SAMBA was founded in 2012 as an extension of the International Mountain Biking Association. As a member of this global community, SAMBA receives important support from the mother association to advance the local mountain biking community.

“We advocate for more off-road cycling opportunities in our area,” said Loftus. “We try to find opportunities for people to get outside and ride.”

For its members, SAMBA offers a handful of sponsored group events throughout the year, things like group rides, overnight camping, barbecues, seminars and fundraisers. But perhaps, most importantly, SAMBA provides the opportunity to connect like-minded riders.

“Both have their merits,” said Loftus, of the advantages of riding individually or with friends. “When you go by yourself, you can clear your head. It’s alone time. But it’s also a lot of fun ripping down trails with riders of the same skill level. There are some big groups that go out.”

The physical and aerobic benefits of mountain bike riding can’t be overstated. While one enjoys nature on the back of a mountain bike, exercise just sort of happens.

“Cycling is one of the best forms of exercise you can do,” Loftus said. “You’ve got to get exercise somewhere. For me, I can’t stand being on a treadmill or an elliptical. I’ve got to be out there.”

“It’s amazing how many people are interested in off-road biking these days,” said Loftus. “We’ve been on that trajectory for years. We’re seeing kids riding. We’re seeing fathers and sons riding. It’s the old saying, ‘If you build it, they will come.’ If trails are close to home, they will be used. We’ve really seen that in the Harrisburg area.”

There’s an exploratory, adventurous element associated with mountain bike riding. Where you and I see trees and rocks and mountains, Loftus and SAMBA see potential trails.

“Prior to SAMBA being founded, bikers lost access to Pennsylvania state game lands,” said Loftus. “At that time, there were very few trails for mountain bikers to ride. We’ve established a lot of riding trails that are there now, and we’re proud of that. But we continue to advocate for more access to that area.”

All it takes is one mountain biking experience. It’s all downhill after that.