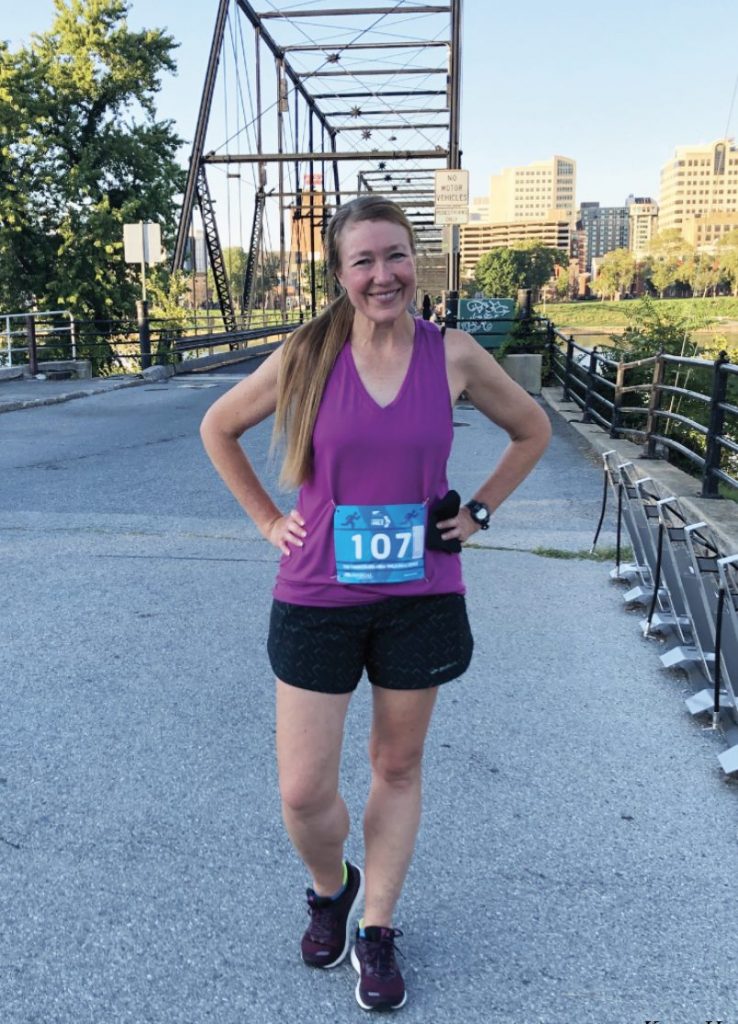 It’s hard to run in a Santa suit.

Running up and over a steep bridge—if you have a fear of heights—is mentally challenging.

And if you’ve suddenly lost your beloved dog to canine cancer, it’s an emotional experience to participate in a race designed for dogs and their owners—minus your dog—two weeks later.

Those were some initial takeaways from a yearlong running challenge I recently completed.

I thought 50 race experiences would be a challenging, meaningful way to give back to others, while celebrating a banner year through something I love—running. My run buds caught my enthusiasm and joined in. Non-running friends thought I was insane. My husband worried I’d end up injured. (Spoiler alert: I miraculously did not.)

I want to make it clear that I consider myself a very average runner. Throughout the year, I achieved a few things, but my personal milestones were nothing compared to the trailblazing people dedicated to lifechanging causes that I met along the way. And like everything else in 2020, my plans were shaped by a worldwide pandemic—as much as I didn’t want them to be.

It all began last September with a mountainside 5K that helped at-risk youth, a beachy half marathon with a big bridge that benefitted volunteer firefighters, and York’s White Rose Run—a 5-miler through city streets that fought opioid addiction.

All year, I met incredible people, heard both heartbreaking and triumphant stories, and learned head-shaking-worthy statistics. For example, about 130 people die every day in this country due to opioid addiction. I met a woman—about my age—who battled to save her son from being one of those statistics. Because she ultimately couldn’t, she co-founded York County’s nonprofit chapter of Not One More. Now she’s working to save other families from her heartache.

More heartbreaking odds: One out of every three dogs will develop some type of canine cancer in their lifetime. My own beloved Jack suddenly became one of those statistics last fall, just two weeks before Gulliver’s Run. This 5K at Gifford Pinchot State Park has raised $66,000 for canine cancer research since 2013 thanks to its dedicated founder, who also lost his best friend to canine cancer. Running can indeed ease heartbreak.

Running also forges friendships. My friend Ali and I drove through the pouring rain—and questioned our sanity—to run the Spring Valley 4-Miler, part of the York Road Runners’ Winter Race Series, which supports the local running community. Dripping wet, we huddled under a tent by the finish line, mud swirling down the road, to enjoy the sweet victory of race donuts—and laughed.

The year took a somber turn for all of us in March. Life—and our plans—lurched. More than a dozen spring races I’d signed up for were canceled or postponed, and I wondered if I’d be able to continue—almost exactly at my halfway point. One thing I knew for sure. I needed running in my life more than ever before. Running was the best escape from the reality of this pandemic, and some days I just wanted to keep running and not return.

Slowly, races adapted and went “virtual,” meaning you could sign up, run the distance in your neighborhood or anywhere you’d like, and your race fees and donations still benefitted great causes—because let’s face it, nonprofits still needed help.

Running the Paterno Family Beaver Stadium Run 5K in my neighborhood didn’t provide quite the same atmosphere, but the event still supported Special Olympics of Pennsylvania during its 50th anniversary year.

As 2020 wore on, virtual races morphed into long distance challenges, like the One NY 500K (311 miles). My friend Joanne and I both ran 500K over two months to total 1,000K—the distance from Niagara Falls to the easternmost tip of Long Island. Every day, we logged our socially distanced miles, texted each other for support, and watched our little runner graphics move across a New York map.

Those miles, powered by our donations, raised money for COVID-19 relief efforts—a cause that didn’t even exist six months prior, when I began my race planning. As New York City began to emerge from the pandemic, it felt like our miles made a difference. Long-term running goals aligned with the long-term endurance we’d need to survive 2020. Running was therapy.

Additional challenges included the summer-long Runnsylvania 283 (the mileage across Pennsylvania)—also benefitting COVID-19 relief, Harrisburg River Runners’ June 100-mile challenge aiding the Central Pennsylvania Food Bank, 76 miles in July for Philadelphia’s homeless nonprofit Back on My Feet, and I contributed 50 of the nationwide Million Miles for Justice in the wake of George Floyd’s death.

I started to equate longer distances with deeper causes. If only I could run long enough to get to the roots of our society’s issues.

And so, running became a way for me to process the events of the past year. Through it all, I felt grateful to be alive, grateful to have the ability to run, grateful to be outside—often with my husband nearby on his bike, grateful for friends and family who donated to many of my causes. When people care enough to say they believe in you, it’s humbling. And empowering. My 50 races for 50 causes totaled 1,176 miles, raised thousands of dollars and even earned me a few race medals and PRs (personal records—at the age of 50!) along the way.

I couldn’t have done it without causes that motivated me to help make the wrongs of our society a little more right.

I logged many miles in Harrisburg, along the river or around the Greenbelt, including my final, 50th race. About 25 friends joined me on City Island to run the Brave Like Gabe 5K for rare cancer research. Do you remember how absolutely perfect and beautiful Labor Day weekend was? A bald eagle flew over the island as we gathered—a magical moment that captured the spirit of the entire past year.

Because the power of running also somehow generates magic over the miles. In between those split seconds when our feet touch the ground, there’s also a split second of hang time when they’re not. It’s the closest we’ll ever get to flying. My friend Marjorie took a picture of me at August’s socially distanced Harrisburg Mile—also on City Island—and magically, she captured that tiny sliver of time. Neither of my feet is touching the ground.

Running puts our feet on the ground. But it also helps us fly. I have 50 memories to prove it.

Karen writes about her 50 races, and all 50 causes, at InspiredMiles.com—including why it’s hard to run in a Santa suit. She apologizes if you read this entire article thinking you’d find out here.

PA to end most pandemic restrictions at end of May; mask mandate remains