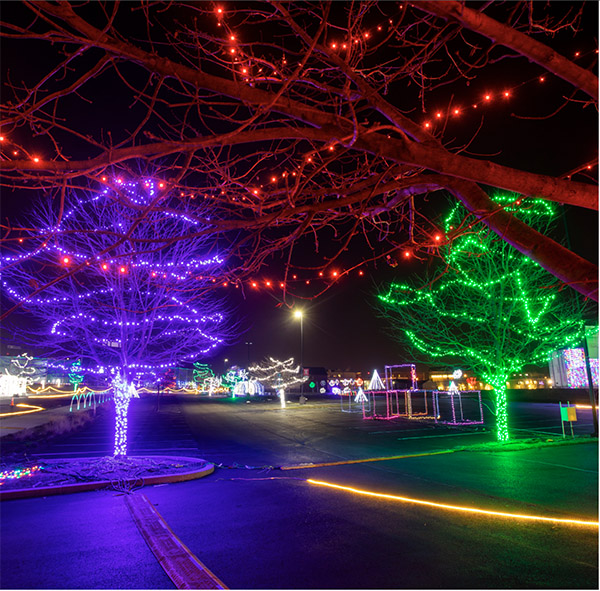 Traditions may be upended this year, but some seem better suited than others for a holiday focused on smaller gatherings and distanced interactions.

Husband-and-wife proprietors Chris Brink and Yana Banova-Brink of Middletown not only want you to visit this year, but they hope it becomes a holiday tradition even when we’re able to gather together again in large groups.

“We hope that people can create memories of bringing their families together here every year,” Chris Brink said. “We’re striving to create the most exciting light show in central Pennsylvania.”

Christmas Spirit Light Show first opened to the public in 2017 at Manheim Community Park. That changed, though, when Mike Reynolds, general manager for the Lancaster Barnstormers, happened to stop by. Reynolds was so impressed by the displays that he invited Chris and Yana to move their show to his team’s home, Clipper Magazine Stadium.

Chris and Yana are touting this year’s mile-long, drive-thru show as their largest yet, with a total of 500,000 brilliant bulbs set inside the stadium and throughout a rear parking area.

The drive lasts 20 minutes from start to finish, transporting visitors through six dazzling tunnels lit to synchronize with holiday music favorites for all ages. Most of the displays comprise pixel smart lights programmed across “hundreds of thousands of channels that can make any colors you want,” Chris said.

Though a naturally distanced event, even Christmas Spirit Light Show needed to adjust to the unfortunate realities of the pandemic. This year’s event is drive-thru only. Santa visits and refreshments sales on the stadium’s field won’t be open this year.

In retrospect, designing a large-scale, public light display wasn’t a far stretch for Brink, a 12-year mechanical engineering veteran at Lower Swatara Township-based Phoenix Contact, a developer and manufacturer of industrial electrical and electronic technology products. He was inspired to create his display after touring a similar light show in Nashville. It was the first light show he ever saw synchronized to music.

“There was nothing quite like it in our area,” he recalled.

So, he decided to make one of his own.

Soon, the do-it-yourself light/music show became a joint venture for Chris and Yana, a self-described “artist by nature” who attended art school in New Orleans. Both were interested in starting a home business together.

As it turned out, this was a home business that sprouted in the family’s cellar.

“All our structures were made in our basement or outside in our yard,” Yana said. “We made it all.”

Today, it takes Chris, Yana, extended family and a hired crew around six weeks to set the stadium alight for the holidays each year.

To assemble metal light display frames, the couple learned how to weld. Same for the show’s display and power boxes. As the couple progressed, son Ruehl, 10, and daughter Amelie, 8, chipped in, accompanied by son Silas, 5.

“With three children, we know this is a precious moment for families,” Yana said. “People lean out of car windows when they leave and yell to us that the show was amazing.”

Each year, Christmas Spirit Light Show donates a portion of its proceeds to a selected charity. This year’s recipient is Clare House, which provides housing and financial stability to homeless women and young children.

Through Silas, who was born with Down Syndrome, Chris and Yana realized that children with special needs often are especially receptive to their productions and encourage special-needs families to visit.

“I like that, in some way, we’re contributing to people’s happy holiday experiences,” Yana said. “We don’t do it for the money. We feel very fortunate knowing we can do something this year (in the pandemic).”