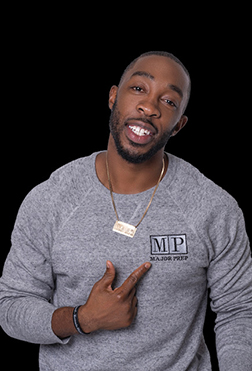 Just because Christmas ended does not mean that the holidays are over quite yet. Kwanzaa, the eight-day celebration recognizing African American and Pan-African principles and culture, began on Sunday.

Major Prep, owned by Bryan Majors, is more than fashion. The goal of Major Prep is to help the community mentally, physically, emotionally and spiritually reach its goals. This is represented through the mission of “Power, Wealth and Excellence,” not only in the apparel, but through motivational speaking, fitness training and other forms of empowerment.

“The brand conceived on the best and worse day of my life,” Majors said.

Major Prep was launched in 2012 after overcoming adversity following Majors’ father’s death in 2008.

Majors now is preparing for more projects in the coming year. He will launch the Martin Luther King “I Have a Dream” tour beginning in January. The goal is to speak at Harrisburg area schools, universities, churches and motivational workshops.

“The aim is to give participants the mindset and leadership tools that I believe Martin Luther King would’ve had in 2022,” Majors said.

Also in Harrisburg, Bre’Ale Martin-Darden created an additional holistic space for the community.

Launched right before the COVID-19 pandemic began in early 2020, The Lotus Pot was created to inspire people “to connect back to their roots with the natural healing properties that was left from our ancestors,” Martin-Darden said.

Using crystals, natural medicine, yoga and other alternate healing methods, Martin-Darden aims to help others heal—mind, body and soul on their own.

She was inspired to take action due to her parents’ illnesses and the concern of COVID-19 in the United States. She said that community support has helped The Lotus Pot become successful.

“I started participating in all these pop-up shops that they had around the city,” she said, “That’s what gave me the push I needed for my business–the support from the community.”

Martin-Darden also thanks her supporters for her success with the business so far.

“I just want to say thank you for everyone who has came and purchased anything from any of my events or even if you just came and talked to me and helped me,” she said. “That really does give me a lot of motivation to keep going.”

Martin-Darden noted that, as she is not the only holistic care business in the area, she appreciates her loyal supporters, knowing that they have chosen her to fulfill their holistic health needs.

While The Lotus Pot’s products are available to purchase through Instagram, including custom orders, the business is actually going through a rebrand for the upcoming year.

These are just two of many Harrisburg-area Black-owned businesses. For many others, view the digital edition of The Central PA Black Business Directory.

To purchase from The Lotus Pot, visit them on Instagram @TheLotusPot.

To book Majors’ to present at your organization, visit bryanmajors.com.