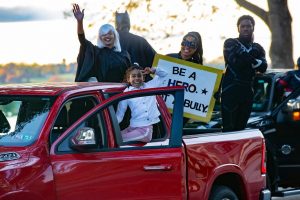 Members of the Capital Rebirth team at a past Superhero Day

For one day, superheroes will descend upon Harrisburg to unite for a special mission.

At Capital Rebirth’s 4th annual Superhero Day in Harrisburg on Oct. 16, that mission is to discourage bullying and support kids who have been bullied.

“You see parents posting about kids being bullied, and it’s becoming a big issue,” said Mikell Simpson, founder and CEO of Capital Rebirth. “Our goal is to educate and stop it.”

Simpson said that the message is even more important this year, as kids deal with the effects of the pandemic and being home from school for over a year.

Superhero day will begin at 11 a.m. with a city-wide parade including 16 superheroes, exotic cars, bike groups and community organizations riding through every neighborhood.

The festivities will then continue on City Island at 1 p.m.

Attendees are also encouraged to dress up as their favorite superheroes.

Additionally, there will be face painting by Ebony’s Magic Brush, a superhero-themed obstacle course presented by Crunch Fitness and rock climbing with the U.S. Army. There will also be a 360-degree photo booth by Roman Empire Media Group, yoga with Soul Smirk Yoga and Mindfulness, bounce houses, field games, food and live music and performances.

Simpson said that he also hopes to bring resources to parents and children who may not know where to go for help.

Organizations like Big Brothers Big Sisters of the Capital Region, Salvation Army, Camp Curtin YMCA, Harrisburg Bureau of Police, Tri County OIC and Breaking the Chainz will be in attendance.

“It is up to us as leaders in the community–nonprofits, businesses, and resource centers–to step in and show our kids that they aren’t alone and that they have places to go and people to talk to for help,” Simpson said in a statement. “Superhero Day is an opportunity for us to bring all of our services to one place and share what we can with the families who really need them.”

The event is sponsored by the Black Voters Matter Fund, First National Bank and D&H Distributing.

Past Superhero Days have drawn crowds of over 500 families, Simpson said, and they hope to see those numbers again this year.

“Come out because you want to be a hero, not a bully,” he said. “Who doesn’t love superheroes?”