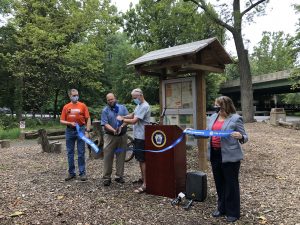 A ribbon-cutting on Thursday delivered good news for fans of both family picnics and off-road biking.

Paxtang Park, which has a long and noteworthy history, had been overgrown and unused for many years until the Susquehanna Area Mountain Bike Association (SAMBA) got its hands on it. Now, a reconstructed and revived park is officially re-opened to the public.

The park is tucked almost under I-83, right off the Greenbelt and just a few minutes from Harrisburg Mall. Just across the street is an entry point onto the trail.

“This is a place for friends and family to gather and spend time together,” said Paxtang Borough Manager Keldeen Stambaugh.

Paxtang Park includes just under 20 parking spots, a large pavilion with picnic tables and a kiosk with maps and historic photos of what the park once was.

The park is in a perfect spot, as there are not many other places around for trail-goers to park, according to Capital Area Greenbelt Association (CAGA) board member Dick Norford.

Paxtang Park sits right in the middle of SAMBA’s 10 miles of trails that it maintains on the Greenbelt. The trails are used by mountain bikers, as well as hikers.

According to Charles Palenz, who does maintenance for the Greenbelt, SAMBA works very closely with CAGA. The Paxtang Park project demonstrated that partnership.

In addition, Harrisburg’s Parks and Recreation Department, along with Paxtang Borough, worked with SAMBA to make it happen. 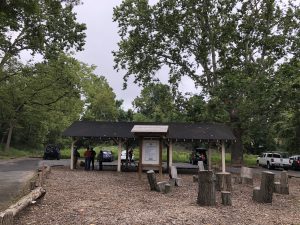 “One of the great things is this unites all of the municipalities together,” Harrisburg Mayor Eric Papenfuse said. “I love the Greenbelt, and I love that we are all working together to make this the connective tissue of the region.”

In 2017, SAMBA had the idea to restore Paxtang Park. Applying for permits and organizing the project took a few years, but volunteers completed much of the physical work in the last six months, SAMBA Vice President Chris Shelly said.

However, the history of the park dates back to the late 1800s, Stambaugh said.

The park was originally about 40 acres and served as a trolley car turnaround spot, Norford said. In the early 1900s, to entice people to ride the trolley, the company built a “trolley park.” It included a rollercoaster, carousel, restaurant and a lake for boating, among other attractions.

With people increasingly turning to cars, the trolley system shut down, and the park eventually fell out of use. But it was the first of its kind in the region, even before Hershey Park, Norford added.

Now, Paxtang Park is much smaller and doesn’t feature any rollercoasters or carousels, but SAMBA sees it a place for people to meet and enjoy the outdoors.

Funds for the project were raised by SAMBA, Pennsy Supply donated the stone for the parking lot, and Harrisburg donated the wood chips for the area around the pavilion.

Once PennDOT completes work on I-83, Shelly anticipates Paxtang Park will need to be shifted over or relocated to avoid sitting directly under the highway.

“We really hope this becomes a gathering point,” Shelly said. “We are going to continue to try to improve this facility.”