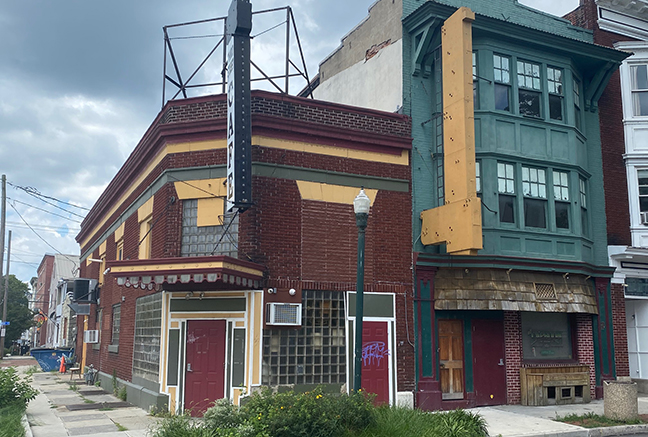 Two former Harrisburg bars, Third Street Cafe (left) and the Taproom (right), have been sold and are slated for restoration.

Two Midtown bars once targeted for closure by Harrisburg’s mayor have been sold, with plans to create a restaurant, retail space and apartments.

On Tuesday, restaurateur Josh Kesler bought 1400 N. 3rd St., which most recently housed the Third Street Café, and, before that, the 1400 Club and Club Wanda’s.

Kesler, who owns the Millworks in Midtown and the Watershed Pub in Camp Hill, said that he would like to open a two-floor restaurant/bar, but doesn’t yet have a firm plan for the two-story, 2,500-square-foot space.

“I want to do something cool and creative, something that adds uniqueness to the neighborhood,” said Kesler, who paid $153,000 for the building. “It could be a great asset to the commercial district there.”

He expects to complete the renovation and open in 2022, perhaps with a business partner.

The Third Street Café has been closed since April under terms of a conditional licensing agreement between the owners and the PA Liquor Control Board (see CLA – LID 64506 (1).). The owners since have placed the license into safekeeping, according to their attorney, Chris Wilson.

The co-owners of the Third Street Café, Anthony Paliometros and the heirs of the late Frank Karnouskos, also owned the building next door, 1402 N. 3rd St., once the home of the Taproom bar.

On Tuesday, Sean Linder and his Bethlehem-based investment group, SJL Rentals LLC, bought that building for $231,000. Paliometros and Karnouskos purchased it in 2016 for $92,000, according to Dauphin County.

Reached by phone, Linder said that he plans to undertake a restoration of the three-story, 4,000-square-foot building, creating five market-rate apartments with commercial space on the first floor. He also plans a small addition in the rear, which would add another 350 square feet of space.

“Midtown is obviously an up-and-coming area,” Linder said, when asked why he was interested in the building. “There’s a lot of great development going on in the city.”

Linder credited Justin Heinly of Midtown Property Management for bringing the property to his attention and mentioned that anyone interested in the first-floor retail space should contact Heinly.

“If there’s any retailer or tenants looking for space, this would be a great opportunity for them,” Linder said.

He said he expects to complete the building renovation by spring 2022.

Notably, in 2015, Harrisburg Mayor Eric Papenfuse tried to revoke the business licenses of both bars, claiming that they were “nuisance bars.”

Alice Anne Schwab, the executive director of the Susquehanna Art Museum, located directly across the street from the bars, said that she looks forward to the renovations of the two buildings.

“We’re super-excited about something positive happening there,” she said. “The proposals I have heard about are really very much in keeping with businesses that are above board and operate with the public interest in mind.”

Kesler said that, in part, he was motivated to make the purchase in order to add to the growing vibrancy of the Midtown commercial district on 3rd Street, where numerous small businesses have opened recently.

“[The bar] was making walkers feel uncomfortable and affecting the businesses around it,” he said. “I think this a good step for the neighborhood.”

Linder added that he also wanted to ensure that the block retained its architectural character.

“For years, they just let their beautiful buildings deteriorate,” he said. “There’s so much historical integrity there that needs to be preserved.”

If you like what we do, please support our work.
Become a Friend of TheBurg!