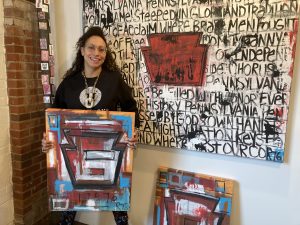 Artist Reina “R76” Wooden and her collection of paintings, “The Keystones 1787”

When Reina “R76” Wooden first received an email requesting her artwork for an exhibit in Eastern Europe, she thought it was a scam.

A curator for the U.S. Department of State’s “Art in Embassies” program was hoping to acquire a series of her paintings to display in the residence of the U.S. ambassador to Moldova.

It was unexpected, and Wooden didn’t know what to make of it. But after some research and discussion with the curator, she decided to take advantage of the opportunity.

“I don’t know how they found me,” she said. “I still feel like I’m off the radar. I still function as an underground artist. To be included was an enormous honor.”

It turns out that the U.S. ambassador to Moldova is a Pennsylvania native. While researching PA artists, he found Wooden’s work and connected to her many keystone-themed pieces.

The federal “Art in Embassies” program assembles exhibitions to be displayed in U.S. ambassadors’ residences during their tenure, which is usually about three years. The organization’s goal is to encourage “cross-cultural dialogue and understanding through the visual arts,” according to their website. They have exhibits in over 189 countries and create about 60 exhibitions per year.

Wooden’s collection of three paintings, “The Keystones 1787,” will become one of these exhibits in Ambassador Kent Logsdon’s residence in Chișinău, Moldova’s capital.

“It makes me finally feel like I can stay true to my identity as an underground artist and still be seen,” she said. “Each year, there have been a lot of challenges. But if I had given up, this opportunity might not have happened.”

Wooden said that her art draws on themes of independence and the pursuit of freedom—things that she believes are especially important to Pennsylvanians.

With the current war in Ukraine, which neighbors Moldova, Wooden believes her art, centering on the idea of freedom, will carry even more significance.

“The keystone symbol carries a lot of meaning,” she said.

Representatives with the “Art in Embassies” program will pick up Wooden’s art within the coming weeks to transport it to Moldova, where it will be on display for several years.

“It’s exciting,” she said. “This is a turning point for me.”

For more information about the Art in Embassies program, visit their website.