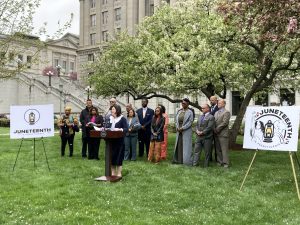 State and local officials announced the recipients of the Journeying Toward Freedom grant, on the state Capitol grounds

Among the recipients is the local group, Young Professionals of Color-Greater Harrisburg (YPOC), which has secured funding for its Juneteenth event, officials announced on Monday.

“This is such a blessing,” said Dr. Kimeka Campbell, co-founder of YPOC. “One of the hardest things is getting funding. This is a relief.”

YPOC is one of seven organizations to be awarded money from the Pennsylvania Tourism Office’s Journeying Toward Freedom grants to support Juneteenth celebrations in the commonwealth. Juneteenth, June 19, is recognized as the day when the last African American slaves were freed in the United States.

This is the state’s first year implementing the grant program, established in partnership with Chester County-based Voices Underground, an organization that helps communities promote Black history. In total, the state awarded $89,000 through the program.

YPOC received $15,000 to assist with the group’s week-long Juneteenth HBG event, slated for June 12-19, with events in May, as well. Campbell said that the money will support their Juneteenth conference, concert and Juneteenth Jubilee. The theme for the entire event is “One city. One team. One economic impact.”

“Juneteenth is about restoring economic impact and returning money to the Black community,” Campbell said.

With this in mind, Campbell, along with state representatives, hope the Juneteenth celebrations also help bring light to the importance of Black tourism to the commonwealth.

“The tourism office set an ambitious goal to make Pennsylvania the nation’s leader in African American cultural heritage tourism,” said Carrie Fischer Lepore, deputy secretary for marketing, tourism and film for the state Department of Community and Economic Development. “We want to be the state that best depicts the Black culture and history within our borders. The Journeying Toward Freedom grants […] are one step towards that goal.”

Recipients of the grant funding are as follows: