The roadway, just off N. 7th Street, dips under the Norfolk Southern railroad and connects to N. Cameron Street.

For years, who was responsible for maintaining the underpass was under dispute, according to Mayor Eric Papenfuse. Norfolk Southern and the city clashed on the matter, experiencing numerous lawsuits.

In turn, the roadway and sidewalks deteriorated, and the steel underpass was in danger of structural failure, Papenfuse said.

“It was pretty awful,” he said. “Historically, this was something of a no man’s land.”

In the end, the state Department of Transportation worked with the city to repave the street, redo and widen the sidewalks, create new inlets and drainage systems and clean and fortify the steel columns under the railroad.

Papenfuse also pointed out that the sidewalks are bike-friendly and connect riders to the new bike lanes on N. 7th Street.

In total, the project cost near $2 million, largely from PennDOT funds, with contributions from the city. 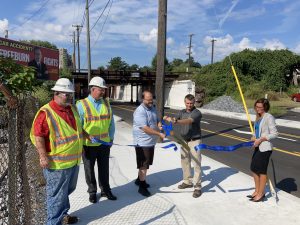 According to Papenfuse, the updates are already paying off. While the underpass did experience flooding during the rainstorm last week, it took significantly longer for water to accumulate due to the new drainage, he said.

“Through cooperation and perseverance, if we all work together we can really do something very positive,” Papenfuse said.

Connected to Herr Street is N. 7th Street, which has been under construction to add a roundabout near the new federal courthouse to improve the flow of traffic. A center median with street trees is also being constructed on the street to calm traffic and better manage stormwater.

City Engineer Wayne Martin said that they expect to reopen that street to traffic by Thanksgiving. In the spring, they plan to put the finishing touches on the road, such as lighting and landscaping in the new median, he said.

Both the 7th Street Multimodal Project and the underpass project are part of the city’s Vision Zero initiative to eliminate pedestrian fatalities in Harrisburg.