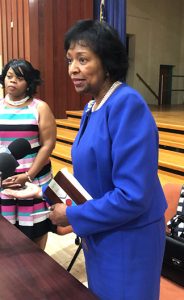 The Harrisburg School District is losing a top official come the end of this month.

On Wednesday, district Receiver Dr. Janet Samuels announced her resignation from her role, as of Jan. 29.

In a news release, the district did not specify why Samuels was leaving at this time.

In 2019, when the school district failed to meet academic objectives outlined in previous recovery plans for the district, the Dauphin County Court of Common Pleas placed Harrisburg under the Pennsylvania Department of Education’s control. The court chose Samuels as the receiver of the district. The previous year, she served as the chief recovery officer for the district.

With the appointment of Samuels, the school board was stripped of most of its power, leaving Samuels as the sole vote on administrative proposals.

The receivership period was set for three years, and the district is currently about two-and-a-half years in. However, according to the district, Samuels only committed to serve for one year and agreed to update the district’s Amended Financial Recovery Plan.

In July 2021, the update was approved by the county court, the district confirmed.

“I am honored to have had the privilege of serving the Harrisburg School District, and I am extremely proud of the work completed since my appointment as receiver, especially in the area of the finance,” Samuels said. “Although there is still much work to be done, I am confident the recently approved Amended Financial Recovery Plan now in place, will serve as a framework to continue the positive trajectory of the Harrisburg School District.”

Samuels thanked the district’s staff, administrators and community stakeholders, along with the Montgomery County Intermediate Unit team for the work they will continue in the district.