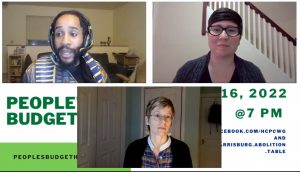 Screenshot from the People’s Budget team’s live-streamed presentation on their survey results.

Harrisburg City Council approved a 2022 budget in December, but new Mayor Wanda Williams is expected to reopen the document and make changes in February. According to city Solicitor Neil Grover, council needs to adopt the final budget by Feb. 15, leaving a short turnaround time for council.

A local group now has used the additional time to make sure that more Harrisburg residents have the chance to offer input on the city’s spending plan.

Members of The People’s Budget team, a collaboration of the Harrisburg Abolition Table and the Young Professionals of Color-Greater Harrisburg, hope there’s enough time for additional community voices to be heard.

“A budget is a moral document,” said Lou Kirkland, a member of the team. “It’s important for residents of a city to be aware of where the city’s money is going.”

Between September and November of last year, the team distributed a survey through email, street canvassing, text and social media, asking community members what they would like to see prioritized in the 2022 budget. In the end, they collected responses from 80 Harrisburg residents.

According to the People’s Budget team, of those who took the survey, 30% lived in Midtown, 26% lived on Allison Hill, 25% lived in Uptown, 5% lived in downtown and 4% lived in South Harrisburg (10% responded “Other”). Additionally, 70% identified as white, 24% identified as Black/African American, and 6% identified as Asian, Native Hawaiian and Other Pacific Islander, American Indian and Alaska Native, or Other (residents could select multiple races).

Although the responses totaled only a small portion of the population, Kirkland said that she believes it represents the larger Harrisburg community’s views well.

Other findings from the survey showed that residents prioritized general fund spending on public works, the department of engineering and parks and facilities. About a quarter of respondents also stated that infrastructure like public works and parks and recreation should take priority in the budget over the police bureau to improve public safety.

In Harrisburg’s 2021 budget, policing took the forefront, as the city invested over $1 million additional dollars into creating new community policing positions within the bureau. At budget workshop meetings, many community members spoke out in opposition to the investment.

According to Kirkland, the People’s Budget team formed in response to these objections and what they saw as a lack of outreach and consideration by council during the budgeting process.

“There were voices saying this is not what we want, not what we need,” Kirkland said. “The city has done an abysmal job at reaching out to residents […] and taking their input into account.”

Kirkland hopes that their model of surveying residents and including them in the budget process will serve as a model for something the city could do on a larger scale.

The People’s Budget team plans to share the results of their survey with council before the 2022 budget is passed, Kirkland said.

“I would hope they actually take residents’ input into account,” she said.