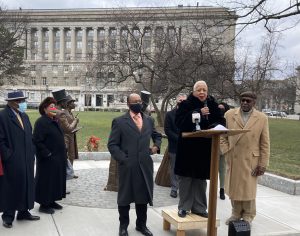 Wanda Williams announces run for mayor of Harrisburg at the Commonwealth Monument.

She affirmed on Thursday that she will seek the Democratic nomination for the city’s highest elected office, making her announcement in front of the Commonwealth Monument on Walnut Street.

“My run for mayor is a commitment to see our city through these difficult times,” Williams said. “I’ve been in the trenches with you, and I’ll stay here until we change the negative landscape of our city.”

Since 2006, Williams has served on Harrisburg City Council, including as council president for her last two terms. Her current council term expires this year, and she will not be running for re-election. She began her political career as a member of the Harrisburg school board, first elected in 1998.

“I am the only candidate running that brings this experience,” Williams said.

She added that she believes that she brings to the field of candidates something uniquely important—a female voice.

Williams, 67, is a lifelong resident of Harrisburg. She graduated from William Penn High School and continued her education at HACC. Williams also stressed that she has always been a Democrat.

Although Williams and Papenfuse at times have clashed over the years, she said that is not the reason she is running. According to Williams, she decided to run after constituents voiced concern with the other candidates in the field and asked her to step up.

Infrastructure improvements, affordable housing and revitalization of blighted homes will be some of her top priorities as mayor, she said.

“You know Wanda. You know exactly what she will do for you because she does it every day,” Martin-Roberts said. “She will represent the people. She will honor your needs. She won’t let you down.”