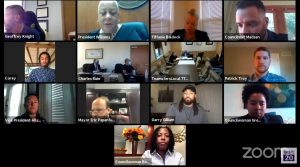 Harrisburg City Council discussed more potential changes to a proposed police advisory board, this time to encourage the Police Bureau’s compliance with requests for information.

At a virtual work session on Tuesday, council member Ausha Green put forth an amendment to the proposed Bill 8 with a focus on compliance.

Under Green’s proposal, any request for information from the board would need to be sent to Mayor Eric Papenfuse, as well as to the police bureau. If the requested information is not provided within 14 days or is deemed unsatisfactory, the board can submit a recommendation to city council and to Papenfuse to freeze funding for hiring new officers, Green said.

Council would then accept or deny the recommendation. If accepted, the bureau would have five days to provide the requested information before the hiring freeze would take effect.

“The thought behind it was to ensure, when the request is made, that the information is actually provided,” Green said. “It doesn’t just give the board complete power, but it brings it back to council.”

At a work session on Sept. 16, Green proposed a series of additional amendments including granting the advisory board with administrative subpoena power. This power was something that some residents repeatedly asked for during council meetings and town hall meetings held in August.

Green also proposed removing the police commissioner and the council’s public safety chair as non-voting members of the board, as was originally proposed, and, instead, inviting them to quarterly meetings. They would be replaced by two members from the city at large, she said.

At the Sept. 16 work session, Papenfuse mentioned that he did not have an issue with those drafted amendments.

“It is my strong desire that the final draft of the bill incorporates the feedback gathered from the town halls and public comments submitted to city council,” one resident’s public comments for Tuesday read.

All proposed amendments will be voted on at the next legislative session on Oct. 13. The bill will then be discussed again at a work session on Oct. 20. Green said that it’s possible that council could vote on the final bill on Oct. 27.