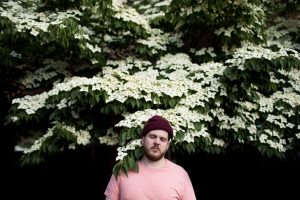 Harrisburg musician Drew Wilburne was in a few bands in the past and loved music for as long as he could remember, but it wasn’t until this past year that he realized he had his own message to share through song.

Under the name “Big Happy,” Wilburne released his first single, “Summer Sleep,” in June, accompanied by a music video featuring some familiar faces in the city.

“Over the past year and a half, I found that I really had something to say,” he said.

The indie/alternative song grew roots from Wilburne’s relationship with his father who has Parkinson’s disease and diabetes. During the pandemic, his father came to live with him when Wilburne’s mom contracted COVID.

“It was a very abrupt and quick situation,” he said. “It was a realization how hard caregiving is.”

With that in mind, Wilburne wrote the lyrics for “Summer Sleep,” which reflect on caring for others and recognizing that time with them is short. The single became his first solo project.

“Ultimately, it was about realizing what it means to care about people,” he said.

But for Wilburne, the meaning of the song grew to not only include his relationship with his father, but with his friends, as well. 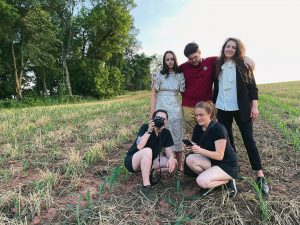 Wilburne, center, with producers and actors in the “Summer Sleep” video. Photo by Legend Coleman.

The “Summer Sleep” music video was shot by Harrisburg residents Amanda Berg, a documentary filmmaker and photographer, and Amanda Mustard, a photographer whose work has appeared in the New York Times and the Associated Press, among others.

Other friends of Wilburne’s, some who you may recognize from Little Amps Coffee Roasters, are featured in the video, as well.

The video starts with shots of people asleep, in a pool, in a field, under a bridge. It’s an eclectic group. One by one, they begin to move–one person frolics in a grape costume, another lifts a barbell. The youngest of the group, a boy, lifts a scooter over his head, flinging it in circles.

Wilburne explained the concept behind the video as each person acting out their dreams. Again, the inspiration came from his dad, who has trouble sleeping, just like he does.

Throughout the process of creating with his friends, Wilburne came back to that feeling of caring for those around him.

“It was really a means of spending time with them because that’s all we really have,” he said. “It helped me reconsider what it means to be present for other people and what it means for how I live every day.”

Wilburne plans to release more singles in the coming months, with a full record at a later date. He’s grateful for the support he’s received this far, especially the support of his friends.

“I feel like I did have something to say, but you’re still self conscious,” he said. “For them to buy into it and to make it better, it just cemented and validated my feelings.”

Listen to “Summer Sleep,” here. Big Happy’s music can be streamed on all major music platforms. For more information, visit his Facebook page.