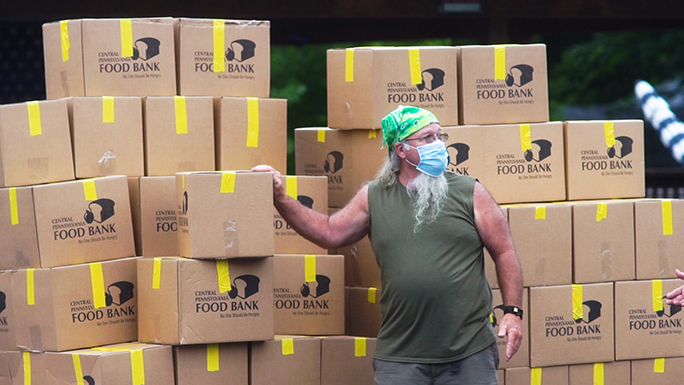 All records were shattered by the Central Pennsylvania Food Bank’s recent donation campaign.

“The generosity has been epic,” said Joe Arthur, the food bank’s executive director.

September’s virtual food drive for Hunger Action Month raised more than $62,000—equivalent to 375,000 meals or almost half a million pounds of food. Donations poured in from nearly 700 individuals, businesses and organizations—including a $15,000 contribution from PSECU, the state’s largest credit union.

“This was the best virtual food drive ever—it’s the most we’ve ever raised by far,” Arthur said. “One of side benefits of the pandemic is people are more virtually oriented than ever.”

This was the organization’s fourth annual campaign, and it netted three times the amount of donations realized in past years. Contributions typically total between $20,000 and $25,000.

Arthur calls the fundraising efforts “efficient,” because monetary donations allow the food bank to purchase specific food items needed within its 27-county service area. The food bank distributes boxes of fresh produce as well as kitchen staples such as pasta and canned goods to central Pennsylvanians via more than 1,000 partners—soup kitchens, food pantries, shelters and other programs. In Harrisburg, that includes the Bethesda Mission, Downtown Daily Bread and The Salvation Army Harrisburg Capital City Region.

Conditions triggered by the worldwide pandemic, including record unemployment, have strained the food bank since March. Demand has increased nearly 50%. In September, the food bank served about 200,000 people as compared to 135,000 people in September 2019.

One of the newest partners distributing those vital brown boxes is the Harrisburg Police Bureau’s community policing department. In March, they established a new food distribution system serving families within the Harrisburg School District, as well as neighboring districts such as Susquehanna Township and Central Dauphin.

“As the product of a single parent household myself, I was eligible for free and reduced lunches,” said Blake Lynch, community policing coordinator for the bureau. “I knew the closing of the schools and after school programs were going to affect the only food source for a lot of the children in our city.”

Every Tuesday since March 17, hundreds of volunteers have mobilized to pack school buses with boxes supplied by the food bank to key distribution points within the city. As the program marks its seven-month anniversary, it’s distributed nearly 650,000 pounds of food to 13,000 families.

Lynch said the program serves about 1,000 families per week on average.

Reflecting on what the program means to the community, Lynch said it “shows the determination and heart of our residents and community coming together to make sure we’re uplifting others.”

With an eye on the future, the food bank anticipates a greater need for food in the coming months.

“Right now, we’re at the tail end of the end of federal help with unemployment benefits running out and expiring,” said Arthur. “Moving forward toward the holiday season and winter months, with the resurgence of COVID-19 we’re starting to see, we think we’re going to see increasing demand the closer we get closer to the holidays.”

All the traditional trimmings that accompany the Thanksgiving turkey? That’s what the food bank is ordering and acquiring right now, so that central Pennsylvania families can celebrate the November 26 holiday, a little more than a month away.

Throughout 2020, the food bank added staff positions to adjust to the pandemic’s food crisis. That includes a first-ever nightshift crew at the Harrisburg warehouse, plus about a half-dozen administrative positions and two drivers. The food bank’s entire staff totals 115, including 95 workers in Harrisburg and 20 in Williamsport. Many continue to work remotely.

On any given day, at least 50 volunteers pitch in as well. Arthur said volunteers are still needed—a sign-up form is available on the website, centralpafoodbank.org.

As he thinks about the food bank’s future, Arthur is cautiously optimistic.

“I’m amazed at how generous people have been—I know it’s a national story, but it’s also a regional and central Pennsylvania story,” Arthur said. “At the same time, monetary donations are still needed. History tells us that recovering from a disaster or recession actually takes a couple years, so that’s how we’re preparing.”

If you or someone you know needs emergency food assistance, call the Central Pennsylvania Food Bank’s help line at 877-999-5964. To make a donation or for more information, see centralpafoodbank.org.