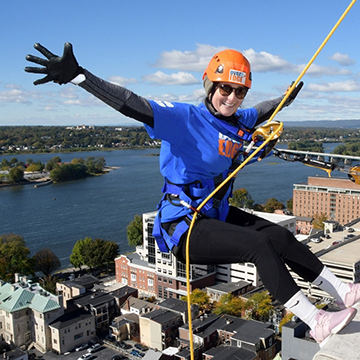 A past “Over the Edge” event

Everyone faces challenges in life.

In a nutshell, that’s what Big Brothers Big Sisters of the Capital Region’s (BBBSCR) “Over the Edge” event is all about.

The nonprofit organization’s fundraiser and adventure, set for Oct. 29, challenges participants to go over the edge of Harrisburg’s Fulton Bank building and rappel 21 stories, or 257 feet, down to the street below.*

“Everyone who’s done it says it’s exhilarating,” said Rich Carroll, BBBSCR’s events and engagement manager. “Overcoming fears is important, and the importance of the matter will overshadow any fears I personally have.”

This is Carroll’s first time managing the event, as well as his first time being an “edger”—the term BBBSCR uses to describe participants brave—or crazy—enough to take a leap of faith, with safety gear of course.

Although the Fulton Bank building—as one of Harrisburg’s tallest buildings—dominates the skyline, he puts the tall task in perspective.

“We’ve all been kids at some point, or we have kids, so we know the challenges kids face and how those challenges can be tough to support through mentoring—especially in today’s world. The bullying problem is so huge and kids feel sometimes as though they don’t have somebody to connect with, so having a mentor helps empower them to power through it,” Carroll said.

Over the Edge is expected to raise about $50,000 toward the program Big Brothers Big Sisters is nationally known for—matching “bigs” and “littles,” or community mentors with area kids. BBBSCR serves five counties—Cumberland, Dauphin, Lancaster, Lebanon and Perry.

“Building those positive relationships—that’s why we’re here, setting these kids up to defend their potential. We want that to be protected,” Carroll said. “And that’s what we’re going down the side of a building for.” 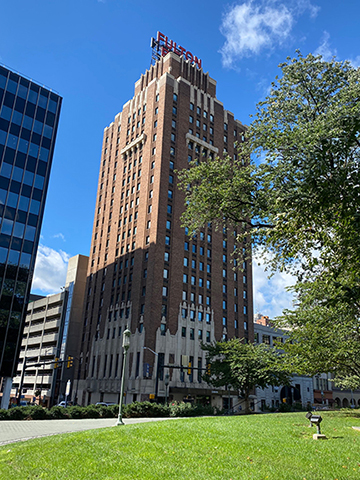 To date, 45 “edgers” are signed up, with about 30 spots still available. Participants are asked to fundraise a minimum of $1,000. To up the ante, corporate sponsors can pay for the “toss your boss” option. And donations can underwrite the cost of allowing an area police officer to rappel, heightening the awareness of BBBSCR’s “Bigs in Blue” mentoring program.

Fundraising stands just over $35,000 currently—a total that Carroll said is no small feat during a year that’s presented seemingly insurmountable issues and obstacles.

“Right now, it’s a pretty good cross-section of the community—some hometown heroes, EMTs, several of our ‘bigs,’ even Sharkman has signed up,” Carroll says. “To be at this point with these kinds of numbers and support is exciting, especially since we got a late start planning.”

The event typically requires a solid year’s worth of planning, but during this pandemic year, the groundwork was laid in late summer.

“The building we’ve used in the past didn’t work out, so we say we’re going higher with the Fulton Bank building this year, in celebration of our 40th anniversary,” said Mary Murphy, BBBSCR’s development director. The organization is gearing up for its 40th anniversary celebration on Dec. 7.

“We started Over the Edge as a way to recognize the adventurous side in many of our supporters. Bowling is on the safe side, but we want to provide different groups of people the opportunity to support our mission,” said Amy Rote, BBBSCR’s president and CEO.

As a thank you to all edgers, especially edgers who may be second-guessing their adventurous abilities, BBBSCR is holding a “Liquid Courage” event the night before Over the Edge. It’s set for the Capitol’s East Rotunda, sponsored in part by Boneshire Brew Works and The Vineyard at Hershey.

Carroll said there will be a handful of spots available for anyone who musters up last-minute courage—along with a check for $1,000—to go over the edge, even on Oct. 29.

“One young lady is excited to do it because she’s deathly afraid of heights,” Carroll said. “She’s a ‘big,’ and she told me, ‘It’s important to support you guys and face my fears, because the kids do it all the time.’ Another woman is a breast cancer survivor, and to her, going over the edge is a unique way to continue her cancer survival story as well as wanting to support Big Brothers Big Sisters.”

Personally, Carroll admits he’s afraid of heights and “slightly nervous” about his own journey over the edge.

“I was at Negley Park last week, and seeing the building from over there—I was asking myself if I was insane,” Carroll said with a laugh. “I think if I can get over the edge of the wall I should be ok, it’s going to be that first step that’s the toughest.”

For more information on Big Brothers Big Sisters of the Capital Region, including Over the Edge, see capbigs.org.

* Due to a forecast of inclement weather, the event was held one day early, on Oct. 28.