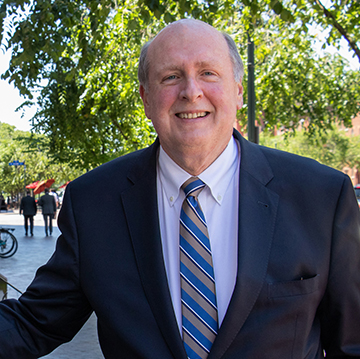 Black said that he plans to retire in mid-2021 as president and CEO of the Harrisburg Regional Chamber & CREDC, following a nationwide search for his replacement.

“The people who I’ve met over the years have been great and hopefully we’ve been able to make a positive difference for our region,” said Black, during a phone interview.

Black, 67, took the helm of the organization in 2001, following a stint with the administration of Gov. Tom Ridge. Before coming to Harrisburg, he served as a county commissioner in Clarion County.

Black said that he’s proud of his lengthy tenure with the chamber and CREDC, both in terms of cultivating staff, many of whom have gone on to other leadership positions, and for promoting the region’s economy.

“The area economy was strong when I arrived here, and it’s arguably even stronger now,” he said.

He said that he’s also encouraged by the economic situation in Harrisburg proper. He said that state receivership and the financial recovery plan were vital to help straighten out the city’s finances and, nearly eight years later, there are promising signs.

“We’re starting to see some private investment again,” he said. “That’s good for the prospects of the city.”

He said that the last year has been one of the most challenging of his career, given the COVID-19 pandemic. Some types of businesses, such as those in the area’s large health care industry, can’t find enough workers, while others, especially in the restaurant and hospitality industries, have suffered enormously.

Black said that he plans to remain in the area after retirement and may even continue to work in some capacity. However, he felt it was time to move on from his current position.

“Twenty years is a long time for an organization like this to have the same leadership,” he said. “It’s time to put a fresh perspective on things.”

To that end, the chamber and CREDC boards have created a search committee, aided by an outside firm, Greensboro, N.C.-based Jorgenson Consulting, to find the organization’s next leader.

“Many thanks to people from all sectors of the region and beyond for the support, collaboration and friendship,” Black said, in a statement. “I look forward to the successful transition of leadership in the months ahead and a bright future for the Chamber & CREDC and our region.”

For more information about the Harrisburg Regional Chamber & CREDC, visit their website.