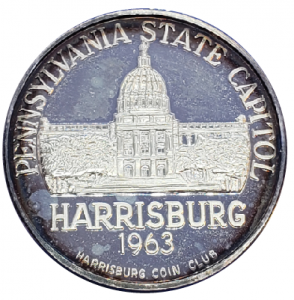 Dan Nettling, president of the Harrisburg Coin Club, is a walking encyclopedia of the club’s history.

Nettling attended the club’s first coin show in 1963 and hasn’t missed one since. This year will be no different, as the club hosts its 60th annual coin show at the Scottish Rite Cathedral in Harrisburg on Sept. 16 to 17.

The Harrisburg Coin Club has a long history. The group was founded in 1950 as a way for coin collectors, or numismatists, to trade, auction and buy old coins and medals.

“Any organization to last 60 years nowadays is incredible,” Nettling said.

The club, which meets the second Thursday of every month at the Lemoyne Community Building, today has over 50 members.

These members are helping plan the coin show for this year. There will be 45 coin dealers from 11 different states in attendance at the show to buy, sell and trade coins. Attendees can also test out and purchase metal detectors on site. Food will be provided, as well.

However, Nettling is most excited for the return of the medal program. The program, which was discontinued in 2008 due to the increasing price of silver, is back in honor of the 60th show. There will be different medals for sale with designs such as the Capitol building, local railroad bridges and the logos of local fire departments.

For Nettling, these events have been an important part of the interest he has had in coin collecting since he was in junior high school.

He remembers his principal and a group of students going through the change people had spent on lunch that day and picking out the oldest coins, as long as they promised to replace them the next day. His mother was also friends with one of the wives of a club officer, who would give her coins for Nettling when he came home during Christmas and after his 24 years in the military.

Nettling took over as the club’s president and vice president in 2016.

For Nettling and other members, history is a big part of coin collecting and the Harrisburg Coin Club.

“The history aspect is most appealing,” Nettling said. “I’m basically a historian of interest.”