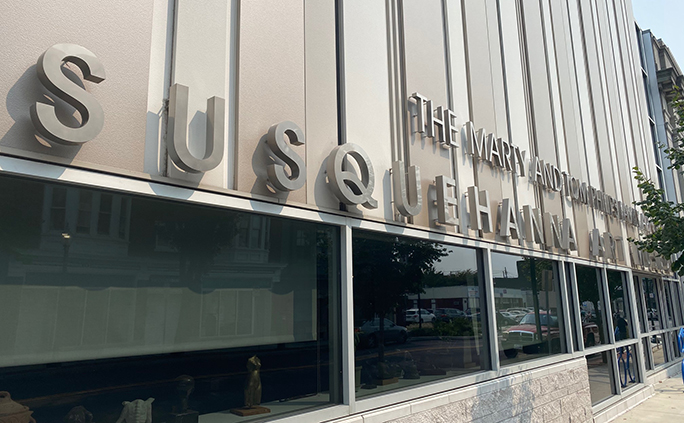 The exterior of the Susquehanna Art Museum in Harrisburg

The financial picture is a little rosier today for capital region arts organizations.

“We applied because we had a tremendous loss, in that we couldn’t do anything to raise money while we were in the situation of still having to pay expenses,” said Alice Anne Schwab of the Susquehanna Art Museum (SAM), which received $25,000.

“Our utility costs are huge—we pay over $5,000 a month for utilities alone,” she said.

SAM’s current annual budget is $650,000, trimmed from 2019-20’s operating expenses, which were just shy of $800,000. The Harrisburg museum was closed to the public for 72 days, but reopened in early June with safety protocols in place.

State funding, called the “COVID-19 Cultural and Museum Preservation Grant Program,” is designed to offset lost revenue by eligible cultural organizations and museums that closed due to the governor’s disaster emergency proclamation in March. The money originates from federal CARES Act funds.

The largest Dauphin County grant recipient is the Harrisburg Symphony Association, to the tune of $64,160.

“This is a powerful expression of Pennsylvania’s values—$20 million to arts and culture—that’s huge,” said Matthew Herren, executive director of the Harrisburg Symphony Orchestra. “We don’t only improve quality of life, but we all contribute to the state’s economy.”

A number of HSO concerts were canceled due to COVID-19 at the conclusion of the 2019-20 season. The upcoming season’s plans will soon be announced, with “Masterworks” and pops performances available on demand—recorded by small, socially distanced orchestras. Additionally, favorite past performances will be brought out of the archives. The 78-member symphony typically reaches an annual audience of 30,000.

“The pandemic, if there’s a silver lining, has brought arts organizations together on a national scale for intense conversations because we’re all facing obstacles,” Herren said, citing statewide conference calls organized by the Pennsylvania Council on the Arts.

“Right now, we are $120,000 down from where we were last year, but I have to also say that many individuals have really been generous,” said Melissa Nicholson, Gamut’s executive director. “We’ve received a lot more donations than what we normally do—$30,000 more to date.”

Gamut’s budget of $520,000—based on the calendar year—is experiencing a roller coaster ride in 2020. The theater was shut down exactly six months, from March 12 to Sept. 12. For the purposes of the grant, Gamut reported their income during the March through July period as $19,000—nearly all of which was earned during the first two weeks of March. Over that same time period, Gamut typically earns $147,000.

“There’s a part of this that you can’t quantify with numbers—that’s the thing with cultural organizations,” Nicholson said. “Our reopening weekend, for example, was very emotional—a lot of people in the audience said they started to cry when the performance started.”

Gamut reopened with digital classes and live theater offerings featuring pick-your-own price ticketing, because “we’re thinking of the community,” Nicholson said. Performers are living within a quarantine bubble, and Gamut is utilizing a socially distanced, 51-person seating chart within the 200-seat theater—operating at 25% capacity rather than Wolf’s 50% allowance. They’re relying on guidelines from the organization Event Safety Alliance and a highly detailed risk assessment based on the Harvard Global Health Institute.

A total of 23 central Pennsylvania museums and arts organizations are receiving grants, including the Gettysburg Foundation, which operates Gettysburg National Military Park’s Museum & Visitor Center. Their award is the region’s largest at $463,346.

Within the state, 164 organizations—including zoos—received grants. The program was financed by The Commonwealth Financing Authority, an agency under the umbrella of the Department of Community and Economic Development.

Back at SAM, Schwab said the award comes during a wave of positive news. Last weekend, 352 people came through the museum’s doors during the city’s annual Gallery Walk, and “people seem to be really excited” about the upcoming “A Virtual Night at the Museum” gala.

“Maybe it’s silly of me to be optimistic, but I really see this as a time for some new ideas,” Schwab said. “We’re not going to meet challenges by doing things the same way.”

Plans are underway to develop SAM’s outdoor green space and parking lot, and replace its van, all within an initiative called “Art Beyond the Walls.”

“We are the first museum in the country they’re doing this grant program with, on visitor engagement,” Schwab said.

Crystal Bridges is also partnering with SAM to assist with educational programming for its next exhibit, “The Modernists: Witnesses to the 20th Century,” which opens Oct. 10.

“It includes art that ironically took place during the pandemic 100 years ago,” Schwab said. “We had no idea when we planned the exhibit that we would be experiencing another worldwide pandemic.”