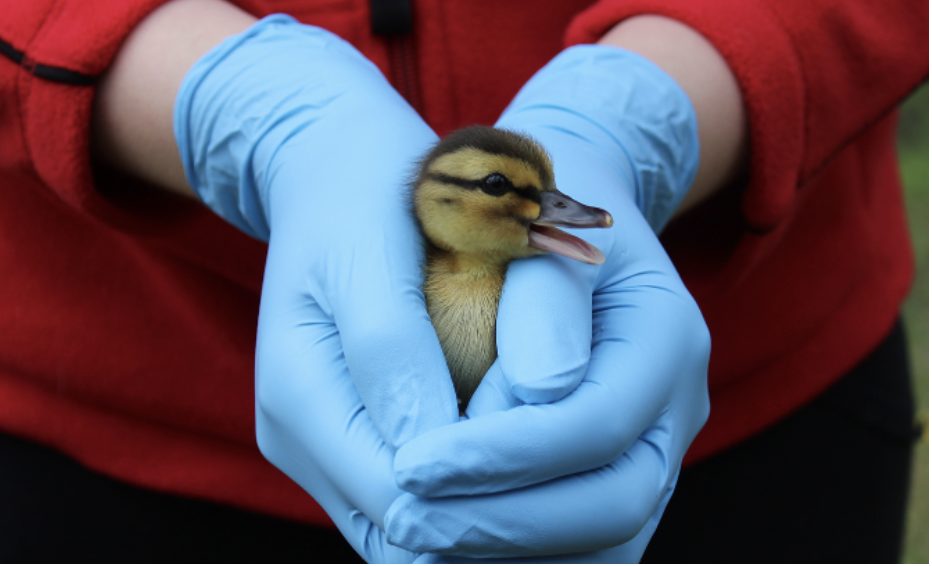 For Emily Garrigan, it’s all about co-existence between humans and animals in today’s rapidly changing world.

Garrigan operates the West Shore Wildlife Center from “the bottom” of her Etters home on a volunteer basis, offering rescue, rehabilitation and conflict resolutions for wild animals, as well as educating humans. She’s assisted by a rotating roster of around 20 volunteers and works the facility on weeknights and weekends around her full-time job at a pharmaceutical company.

“Our mission here is to inspire cohabitation between animals and people,” said Garrigan, who founded the facility in 2019. “People need to learn to co-exist in ways like learning how to safely protect their garden without harming animals.”

You won’t find Fido or Fluffy at West Shore Wildlife.

The facility’s most common clients comprise, but aren’t limited to, Eastern cottontails, possums, turtles, squirrels and ducks. Permanent residents include Steve-O, a banded pigeon, and Bert and Ernie, two escaped male quails found in an Etters neighborhood. No one can determine from where these animals may have escaped, and all appear too domesticated to successfully be released into the wild.

As green spaces throughout the region are overtaken by development at what seems like a continuously accelerating pace, wild animals are losing their native habitats and now can be seen roaming residential yards or busy roadsides. This worries Garrigan.

“Most animal species can adapt well to living in human environments, but we, as humans, still need to improve how we co-exist with them and to preserve as much green space as possible,” she stated.

Garrigan serves as West Shore Wildlife’s board president and lead rehabilitator and holds state and federal permits for the rehabilitation of mammals, passerines, raptors, reptiles, amphibians and endangered/threatened species. She also has interned as a wildlife rehabilitator and educator at Raven Ridge and Tamarack wildlife centers, as well as serving as an educator at ZooAmerica.

Last year, Garrigan became a certified wildlife rehabilitator through the International Wildlife Council. She also holds state permits for the educational use of wildlife, which allows West Shore Wildlife to serve as a sanctuary for non-releasable wild animals.

“Emily is dedicated to rehabilitating her animals. She’s just amazing,” said Cathy Ankeny, a volunteer animal transporter for several regional rescue organizations. “(West Shore Wildlife Center) is low-funded, so they do what they do because they love animals.”

West Shore Wildlife Center receives no government funding and is run through private donations. The organization also accepts donated care items through an online wish list it maintains on Amazon.

Ankeny, of York County, has done rescue volunteering for seven years throughout the region, primarily dealing with exotic bird species. She’s noticed that rescue calls for injured or misplaced animals have been more “consistent” over the past couple of years.

“People were home more during the pandemic and spending more time in their yards, or working more with security cameras, so they’re noticing animals more,” Ankeny noted.

The most common reasons for calls, Garrigan said, stem from vehicular mishaps, attacks by domestic animals and “human reasons” that are “sometimes accidental,” but not always. Sadly, human cruelty serves as a factor in some cases, like a mallard duck hit by a crossbow that she treated. Under Garrigan’s watch and care, the mallard fortunately recovered well enough to return to the wild.

Garrigan is required to report such instances of apparent wildlife cruelty to the Pennsylvania Game Commission, which places the case under its own jurisdiction for further investigation and often leads to charges. She readily admits that running a wildlife rescue poses its fair share of challenges, but she seems to like it that way.

“It’s such a challenging field in that it keeps me engaged,” she said. “You never know what’s going to come through that door. Every day is different. It keeps me engaged physically, emotionally and spiritually.”

In total, West Shore Wildlife Center takes in an estimated “1,000 to 2,000 animals per year,” which has included several injured turtles found by Tim Bonus of Camp Hill. The self-proclaimed turtle lover spends much of his time paddling through regional waterways to photograph and observe turtles. Sometimes, he brings in injured or sick turtles found along his travels.

“The work they do (at West Shore Wildlife Center) is just incredible,” he said.

For more information on the West Shore Wildlife Center, call 717-268-9574 or visit www.westshorewildlife.org.