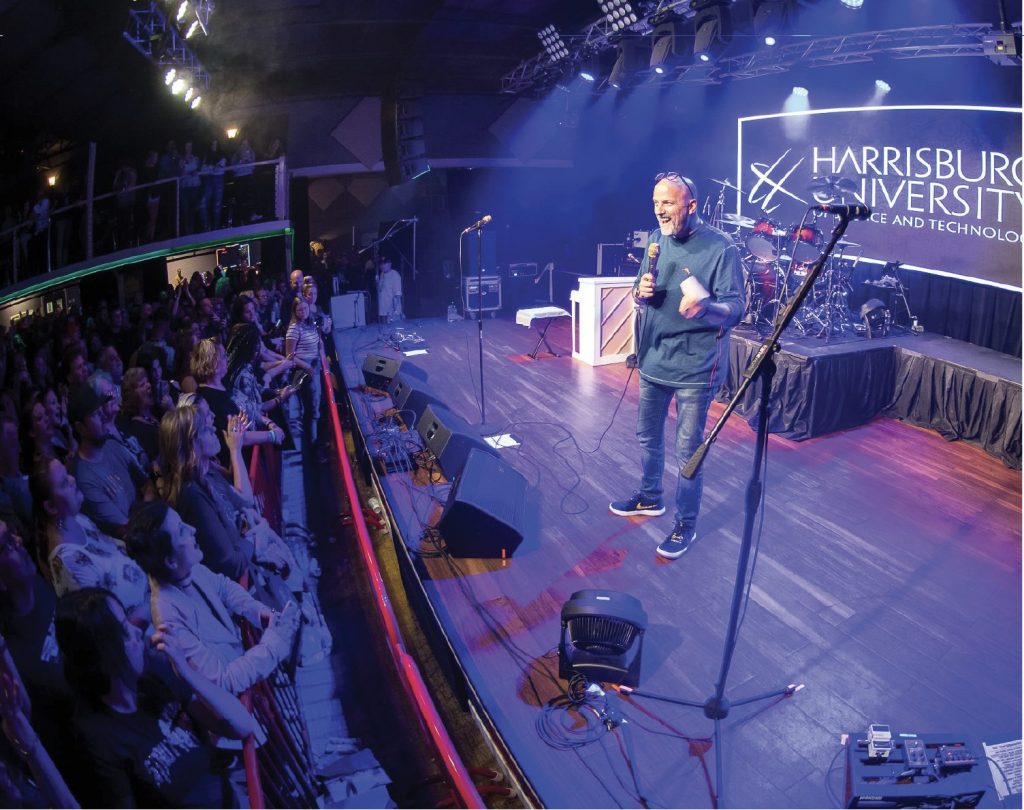 Carlisle resident Megan Strong has been a fan of the rock band All Time Low for at least four years.

She’s seen them perform live multiple times, once in Hershey, another time in Philadelphia. Whenever All Time Low, or one of her other favorite punk-pop or rock bands would ask fans on social media where they wanted to see them play, Strong would comment “central Pennsylvania.” Her husband would laugh, joking that it would never happen.

But then it did.

By February 2020, Strong was singing along to her favorite All Time Low songs with the band members themselves at XL Live in Harrisburg.

“I couldn’t believe when I heard they were coming to Harrisburg,” she said.

She didn’t know it at the time, but that would be her last concert before COVID—a long music-less year for Strong, who described herself as “a huge concert-goer.” But now, over a year later, she holds tickets to what will be her first concert post-COVID—All Time Low at XL Live, again.

“It gives me chills just thinking about it,” she said. “One of my favorite things about concerts is being in a room full of people, there for the same thing, singing the same songs.”

All Time Low is just one of the over 20 bands and artists that Harrisburg University Presents is bringing to the area late this summer into fall. There’s singer-songwriter Jason Isbell and the 400 Unit, rockers Young the Giant, alt-rock bands Grouplove and Cage the Elephant, and Mexican-acoustic guitar duo Rodrigo y Gabriela, among many others. For a while, it seemed like HU Presents, the concert production team for the university, was announcing a new show every couple of weeks.

Harrisburg has been growing as a live music destination over the past few years, explained Frank Schofield, the director of live entertainment and media services at Harrisburg University. As the music world amps back up in a post-COVID world, HU has been working to continue building on the momentum they previously had.

But according to Schofield, there’s a lot that has to go on behind the scenes before an artist steps out on stage with a “Hello Harrisburg!”

Schofield said that his secret pleasure is looking at artist lineups for upcoming music festivals. He scans the lists, noticing which band is trending or what artist is gaining popularity. But they have to pass a few tests. They have to be right for Harrisburg, and they have to be a band that Schofield himself would listen to.

When he finds a band that he has to have, that’s when the weeks of work begin. There’s a lot of logistical work, communicating back and forth with agents, deciding on a venue and choosing a date. It’s one long email thread that continues until Schofield sees one word—“confirmed.”

“Once it’s confirmed, boom, that’s the golden word,” he said. “It’s always a thrill. It’s like scoring a hockey goal.”

If Schofield were really playing hockey, he’d be carrying the team. He’s scored left and right with bands he’s convinced to make the trip to central PA. Jason Isbell and Cage the Elephant are a few of the big-name bands that he’s knocked into Harrisburg’s net, although, out of the over 20 bands he’s scheduled for this summer and fall, he couldn’t pick a favorite.

HU Presents and XL Live have been partners since 2018. Schofield handles all of the negotiating with agents and XL Live does ticketing and provides the space, staffing and set up for the show. The partnership has been vital to helping XL Live grow and attract bigger-name bands, Conduit said.

He explained the difficulty of booking bands at a relatively new venue like XL Live that hasn’t yet built up a resume of big-name performers. It’s especially hard to attract bands to Harrisburg, a smaller city, with the typical tour stops being in places like New York or Philadelphia. Often, Conduit and Schofield have to find bands that are traveling through the area on tour and snag them to make a stop.

“He [Schofield] doesn’t take no for an answer,” Conduit said. “He’s very determined.”

Not only has XL Live benefited from Schofield’s work, by being able to bring bigger artists into their venue, but the whole region has, as well, Conduit said.

“This is really good for Harrisburg,” he said. “Harrisburg hasn’t seen anything like this in decades.”

Schofield has always loved music. The former radio DJ at Wink 104 and iHeart Radio, among other stations, never thought he’d end up where he is, but he’s happy he landed at HU.

“I don’t think it was ever a planned destination or journey for me, but it’s perfect for me,” he said. “I run to work every day.”

“That was the moment the industry took notice to what we were doing here,” he said. “It was a turning point for us.”

The same was true for XL Live, which was building momentum and getting ready for its biggest season yet.

But then the pandemic struck and all future concerts were cancelled. It was hard on Schofield, Conduit and the live entertainment industry as a whole.

“Nobody really talked about the live entertainment industry, that employs so many people, that was just decimated,” he said. “There wasn’t any fundraiser to help people out, and there weren’t any government funds for these people. People just lost their jobs.”

It was a slow year and a half of booking, cancelling, watching and waiting for Schofield, a stark contrast from the energetic months before. But as post-pandemic life came into focus, the industry quickly kicked back into gear.

“All of the sudden, it was like, ‘Bam!’ and alarm clock went off,” he said. “It was just nuts. For four or five weeks, everyone in the industry was just upside down.”

Schofield’s eyes would be blurry from reading and sending emails all day when he would get home from work. It was crazy, but exciting—live music was back.

Starting in mid-August, bands will take the stage in Riverfront Park, XL Live, Hershey Theatre and The Englewood.

Even as this concert season is just getting started, Schofield is already booking bands for 2022. Fans can expect to see some even bigger names headed to Harrisburg in the coming year.

But for now, he’s just excited to be headed back to concerts.

“Central PA has never had it so good,” he said.