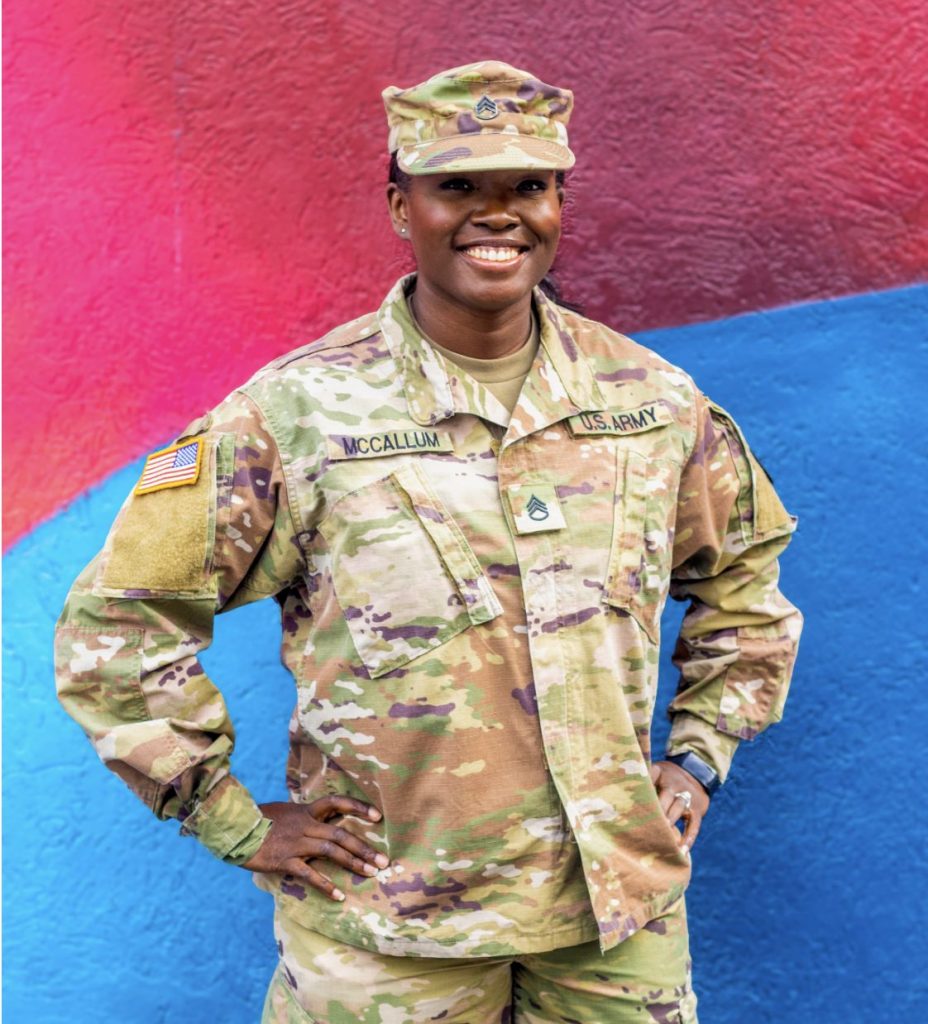 You might say that Victoria McCallum has a very eclectic resume.

It’s not everyday that you meet someone with the following credentials: artist, soldier, entrepreneur, athlete.

She lives her life as an Army National Guard staff sergeant, a business owner and “Best Warrior” competitor.

“Ultimately, I really just wanted someone to tell me what do to,” said McCallum of her decision at 17 to join the National Guard.

She described her life before that as “always living in between things” and credits an extended church family for helping her through those young years.

“It was me making a lot of decisions to make sure that I had the best outcome in life despite what was going on around me, “ she said.

After high school, McCallum studied at the University of the Arts in her hometown of Philadelphia, at a school she never realized existed. It was kismet.

Walking down Broad Street, she came upon the school, discovered that it was dedicated to arts education and decided to enroll, eventually graduating with a bachelor’s degree in fine arts.

After graduation, she experienced what many graduates do—fear.

“I was kind of panicking,” she said. “I had an arts degree, and I wasn’t sure what I was going to do right after school.”

Then a seemingly unlikely partner, the Army, offered her a job. Recruiting and retention needed a graphic designer, and she jumped at the chance, serving in that capacity for a few years.

After a stint in the private sector, McCallum found herself in Harrisburg, a city she admits that she had completely misunderstood.

“I was actually pretty surprised Harrisburg was a city,” she said. “I always considered it a city of like a Capitol building surrounded by trees. So, when I got here, I was so amazed. I just felt like Harrisburg has so much character.”

That’s when she and her business partner created Na’toria Marketing and Design Solutions.

“I felt that a lot of minority businesses in Harrisburg didn’t have the marketing tools that they needed to be aesthetically competitive against their non-minority competitors,” she said. “And I felt that maybe that’s something that we can provide to this specific community.”

McCallum, 32, described Na’toria’s client base as eclectic and diverse, serving people in real estate, construction and even self-published authors.

In the meantime, the National Guard continued to need help, so she went back to work on active duty. She’s been juggling her military life and entrepreneurial life since.

She credits her team with enabling her to balance it well.

“They [the Na’toria team] are why Na’toria is still growing strong, because as a soldier and non-commissioned officer, I don’t believe that I have to do everything myself,” she said. “I rely on the team. I know how to delegate.”

The Pennsylvania Army National Guard has also allowed McCallum to compete in the state’s “Best Warrior” competition for the title of “Non-Commissioned Officer of the Year.”

The competition begins at the company level, and participants rise through brigade then state levels. McCallum made it to the state level.

“I was actually really excited to even be considered for the competition, and originally my goal was to get to brigade level,” she said.

McCallum didn’t think she was eligible for the competition, because, at 19, she was diagnosed with type-1 diabetes. So, she had to battle just to stay in the National Guard.

In the end, she didn’t win the competition, but is proud that she did well.

“It was a way for me to prove that, not only was I not a liability, but I can also be very successful,” she said.

McCallum credits her husband, who was willing to forgo their planned trip to Morocco, for her ability to compete in Best Warrior and for helping her make this complex life work.

“He makes me feel like I can do anything, and I just love him for that,” she said.

McCallum also credits the Army for cultivating leadership in her “as being a soldier and then being a leader.”

“I’ve experienced a lot of terrible leadership, and some great leadership,” she said. “And so I have learned to take lessons from both to develop the leader I want to be, and I know what I don’t want to be.”

Far from her days of moving and chaos, McCallum has defined her life and has plans for her certified minority-owned business—internships, partnerships and employing creatives.