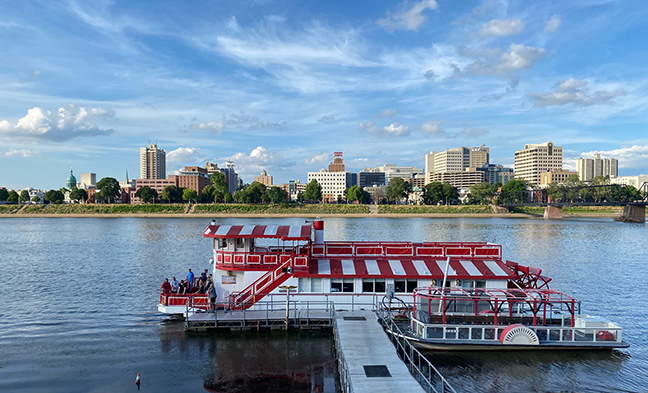 Pride of the Susquehanna riverboat

Appropriately, Kim Rice landed upon a nautical term to describe the similarities between her and her late father, former Dauphin County Commissioner Fred Rice.

“We are both boat-rockers,” she said. “We are not afraid to rock the boat.”

It’s exactly that fearlessness that propelled Fred, back in the early ‘90s, to become the second chairman of the board of the Pride of the Susquehanna riverboat. And it’s the same fearlessness that now allows daughter Kim to follow in his wake.

Kim said that her late father inspired her own journey.

Fred Rice was outgoing, energized by people, and knew virtually everyone, she said. His hunting cabins in Dauphin and in Perry counties were full of friends, laughter and fond memories.

“He lived life to the fullest,” Kim said.

He was in the Lions Club and Safari Club, was a Gov. Tom Ridge appointee to the Mid-Atlantic Fish Commission, and chaired the Lower Paxton Republican Committee. A veteran of the U.S. Army during the Korean War, he was a successful insurance and investment consultant.

When Dauphin County Commissioner Jack Minnich resigned to become the court administrator in 1985, county judges selected Rice to replace him, and his journey to launch the boat began.

“He was so excited about it,” Kim said, citing her father’s friendship with one of the founding riverboat members, Mike Trephan.

“My dad was really good at wheeling and dealing to get people to do stuff for him,” Kim recalled, with a laugh.

“Deb and I were doing everything,” recalled Kim, who also holds down a full-time job with the commonwealth.

Donahue, whose father Bruce Miller was also a noteworthy local leader, served as president of the board from 2018 through 2021. Kim took the helm at the end of last year.

As the first female president of the Pride, Donahue had rough waters to navigate, including a pandemic, funding shortfalls, board resignations, internal power struggles, maintenance issues and more. Kim inherited much the same.

“I love the riverboat. I do enjoy riding on it,” she said. “I love going to City Island. I love going to meetings there. It brings me closer to my dad. He loved the river, and he loved the Pride of the Susquehanna. I am honored to do it.”

She is humble when considering her dad’s legacy.

“I can’t match my dad and his contacts,” she said.


The last few years have been tough ones for the Pride. In 2018, high water repeatedly grounded the riverboat, which was just beginning to recover when the pandemic hit.

Board members have frequently paid for the operation and repairs of the boat out of their own pockets, Kim said,

“My goal is to get it to be self-sustaining and not be in such jeopardy,” she said.

Therefore, she plans to focus on grant-writing, marketing, expanding the board and fundraising. Exciting new programs for younger people also are waiting at the dock.

She said that COVID-19 and its two years of restrictions hit every nonprofit like a hole in the hull. In the first year of the pandemic, they had to operate at a 25-person limit instead of 110, complying with restrictions imposed upon bars and restaurants because they serve alcohol.

“We lost our shirt to cover the cost of the crew and fuel,” Kim stated frankly, noting the $300 per hour expense to operate the boat.

This year, she noted, the board already secured a gaming grant from the Dauphin County commissioners for $75,000. However, that is not nearly enough to help them swim long-term.

“This boat is 34 years old, and there are constantly things that need repair,” she said.

To help maintain the Pride, she is working with new board member Lorri Ribbans to utilize the skills of Dauphin County Technical School students.

A popular veterans’ cruise will be held on May 30, over Memorial Day weekend, and is free to veterans.

Public cruises will resume in May, only on the weekends, said Melissa Snyder of Daza Development, who is aiding in the daily operations of the nonprofit.

In June, the Riverboat is expected to start full week and weekend public cruises. Starting in June, they also will have:

Still in the works are “Bourbon on the Boat” (bourbon tasting cruise) and “Trivia Tuesday.”

Popular country singer Garrett Shultz is on tap for a major fundraiser, Boat-toberfest, in October. A tribute to late board member, attorney Bill Cornell, is also planned.

Kim said that a leader can’t be afraid to ask for help, so she is. The riverboat needs welders, sponsors and donors.

When Kim was cleaning out her parents’ things, she found a Nick Ruggieri print of the riverboat, signed by Captain Jack and two other captains as a thank you for her father’s service.

The riverboat may still be buffeted by rough waters. However, that print reminds her that rocking the boat can keep them sailing smoothly up the Susquehanna for years to come.

The Pride of the Susquehanna sails from City Island, Harrisburg. For more information, visit www.hbgriverboat.org.