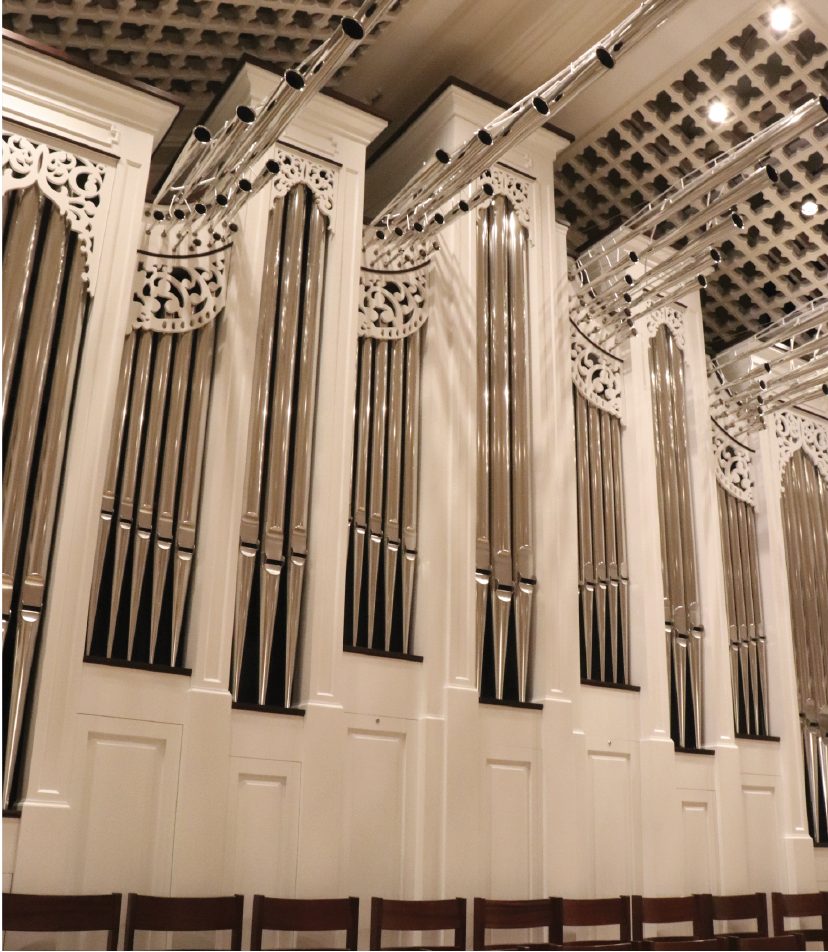 The new pipe organ at Market Square Presbyterian Church, therefore, is distinctive, believed to be the first one in decades installed in a Harrisburg church.

Market Square Presbyterian has a long history of organ music dating back to 1872, when a Hook & Hastings organ was installed in the then-12-year-old building. After nearly 50 years, an Aeolian-Skinner organ, in need of major repairs, was replaced by one from M.P. Möller Co.

Then came an unpleasant surprise. The organ began to falter after only about 30 years, said John K. Robinson, a longtime church member and spokesperson.

Tyler Canonico, now in his fifth year as minister of music and organist at Market Square Presbyterian, said that his predecessor had alerted the church to the bad news.

“When I arrived, I spent several months compiling a list of the organ’s failings and gave a presentation to different committees,” he said.

Canonico then served as co-chair for the organ selection committee, which was responsible for finding organ builders that they believed could handle the project. Interviews and proposals followed.

“Once the project was approved, I oversaw all artistic aspects of the project—the stoplist (different sounds), the console design, etc.,” said Canonico, who also serves as the organist for the Harrisburg Symphony Orchestra and is founder and co-conductor of the Harrisburg Camerata.

“Opus 136 reuses the best of the Aeolian-Skinner and Möller pipework to reorient the organ towards accompanying choral music, leading hymn singing, and the performance of solo repertoire,” Robinson said. “Each stop was reworked and re-voiced by Létourneau for remarkably cohesive choruses while assuring each stop’s musicality.”

On Létourneau’s recommendation, Market Square rebuilt the organ chambers with harder, denser surfaces to better reflect sound. Now, the organ’s full spectrum is projected into the sanctuary, especially in the bass and middle registers, Robinson said.

In February, nearly 300 people participated in the new organ’s dedication ceremony, led by world-famous concert organist Ken Cowan. But arriving at that point was complicated by the pandemic, by the closed border with Canada, and by the need to renovate the room that the organ was to occupy.

Choosing a name for the new organ was easier. It was named for the late J. Nedra Schilling, an active member of Market Square Presbyterian for more than 50 years. A leader in the insurance field, Schilling also was a community leader and philanthropist whose foundation supported many causes.

In 2019, the foundation made its single largest distribution in connection with the church’s “Renew, Restore, Rejoice” campaign, which helped fund the rebuilding and enhancement of the church’s organ, as well as significant renovations to the sanctuary.

Opus 136 reflects the church’s uniqueness: its investment in the future, its mission of inclusivity and social justice, and its tradition of fine worship and music, according to Canonico.

“Létourneau’s design was strictly for Market Square,” he said. “There isn’t any other Létourneau organ like ours in the world.”

It isn’t only Market Square Presbyterian that benefits from the organ’s more resonant sound. Many groups, such as the Harrisburg Choral Society, incorporate it into their concerts. It’s also a highlight of “Arts on the Square,” a series of musical and visual arts presented by local, national and international performers.

The church currently is featuring musical events to introduce its new organ to the community.

“It’s a significant new addition to the music scene in central Pennsylvania,” Robinson said. “And the recently enhanced acoustic ambiance of the room has been acclaimed as ideal for both music and the spoken word.”