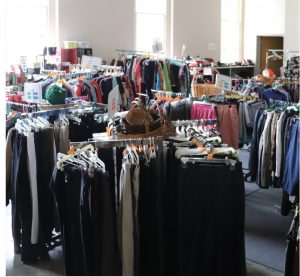 In May 1787, delegates gathered, argued and debated in Philadelphia at the Constitutional Convention.

At the same time, a log church was being built in Harrisburg, then a city of about 600 people, with land given to them by city founder John Harris Jr.—lot number 187 on Chestnut and 3rd streets.

“They brought their faith with them, and they worked hard,” said Rev. Sue Schmidt, Salem United Church of Christ’s pastor. “It was a group of hard-working people.”

Those early immigrants helped build Harrisburg, with the church originally serving both German Reformed and German Lutheran congregations. The present building, erected in 1822, today stands as the city’s oldest place of worship.

Over the years, the church has witnessed much history, even housing soldiers and serving as a hospital during the Civil War. At the war’s end, its bell pealed as President Abraham Lincoln’s body arrived on April 21, 1865 to lie in state at the Capitol.

Last December, Schmidt became the church’s new pastor, another part of the long and prestigious history of Salem serving worshippers and the Harrisburg community.

The church, steeped in history, large by any standard, could be inconspicuous among the tall buildings, traffic, construction and busyness of Harrisburg.

But looking up, one is jolted by the presence and beauty of it—the federal architecture, white-washed brick exterior and 110-foot bell tower with its domed, octagonal cupola, twinned by two, three-story towers.

The people of Salem are proud of this history and, in 1975, the church was added to the National Register of Historic Places.

“When you ask about Salem, the first thing people say is, ‘We’re historic Salem. In 1787, John Harris set apart some land for church, and so we got that land,’” Schmidt said.

Like with many urban congregations, church attendance has declined over the past decades. And because of this, some historic churches in Harrisburg have been put to other uses.

For instance, the First Church of God on N. 4th Street, originally built by a breakaway group from Salem, now is the home of Gamut Theatre.

“We’re very committed as a congregation to continuing to be open as a place of worship,” Schmidt said.

And, like many city churches today, Salem also uses its building to serve the community.

The second floor holds a clothing closet, with an entire room dedicated to children’s needs. The challenge with an old church like Salem UCC, according to Schmidt, is keeping it functional. Not just in the physical sense, but in the community sense

“How can we help our community flourish?” she said. “What resources, what opportunities, what parts can we offer downtown Harrisburg that aren’t already being offered?”

The hall, with its soaring ceilings, has hosted many basketball games. An abandoned, net-less hoop hangs as a witness to the past.

The church is renovating this space with the goal of community use. Schmidt brainstormed that the space could be used as a tech center, nonprofit business or space for immigrant communities.

“God is doing the groundwork,” she said. “How can we bless the community with this space?”

These aged churches provide value to the community even beyond practical use.

Even as Schmidt and the congregation search for new ways to serve Harrisburg, the building holds something more than just usefulness.

“I think they [old churches] hold sacred space,” Schmidt said. “Not that God can’t be found everywhere. But there’s something about a community of people that follow God. And that is their heart for years and years and years of prayers for the city.”

For nearly 200 years, the Salem church has housed a worshipping community in Harrisburg. Its walls have supported many generations and, today, help tell the history of the people of Harrisburg.

Thanks to Salem UCC for lending the resource, “A History Salem United Church of Christ (German Reformed) Harrisburg, Pennsylvania from 1787 to 1989,” which was used for historical reference.