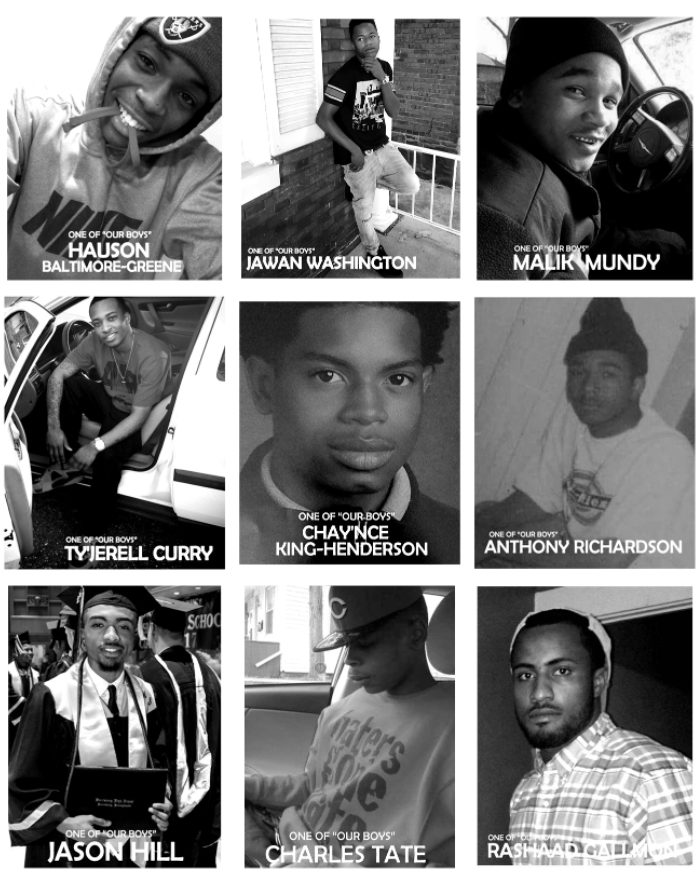 Young men featured in “Our Boys.”

It was 2014 when Harrisburg-area resident Shanelle Baltimore received a panicked call from her youngest son, who screamed on the other end that someone had been shot.

Over seven years later, Baltimore can still recall every detail of that night. She remembers the conversations leading up to the shooting, the exact times she made phone calls to relatives, and the waiting room at the hospital, flooded with friends and family.

But of course she remembered everything—it was the night her firstborn son died.

Every morning since, Baltimore kisses a framed picture of Hauson Baltimore-Greene Jr., better known as “Choppy,” the nickname the family gave him after his dad, “Big Chops.” There are reminders of him everywhere, she said. The family celebrates Hauson’s birthday in November and the day that he passed, Jan. 18, every year. Conversations about Hauson will trigger laughter and tears, but are largely kept between family members and close friends.

When Hauson’s cousin, Lawrence Greene, approached her about sharing her story for a documentary he was making, Baltimore was not interested. It would be too painful, and she didn’t know if she was ready to share his story with the world, even years later. When Green asked again, she considered it and decided to give it a try—for Hauson.

As soon as she walked into the filming room, she was surrounded by other Harrisburg mothers who had lost sons to gun violence. It was like being at a family reunion, she explained.

“I felt like no one understood my pain and anger,” she said. “But being in a room of other mothers who went through the same thing brought comfort to my heart. I felt like this is something I had to do.”

Greene, of Eli Greene Films, expects to release his film, “Our Boys,” late this summer. It’ll be the second documentary he has produced, this one building off of the last.

His first film, “Torin,” followed the life and death of Middletown high school student Torin Dworchak who was bullied and eventually shot and killed.

After seeing the effect the film had, impacting the community and raising over $20,000 for anti-bullying charities, Greene wanted to continue the story—this time in his hometown.

“I feel like maybe this is what I’m supposed to be doing,” he said. “This happens to so many people in Harrisburg. Their stories have to be told.”

Greene reached out to a few mothers he knew who had sons who were lost to gun violence in the city. But word spread and, soon enough, Greene had a room full of mothers and family members sharing the stories of their sons, brothers, grandsons and friends.

Like Baltimore, many of these mothers hadn’t talked much about their sons’ stories—it was painful. Sharing their experiences on camera was definitely not easy—Greene could tell. They often had to take breaks from filming.

“I was very emotional,” Baltimore said. “But this was something I had to do. This isn’t about me; it’s about my child and other young people in our community.”

In addition to Baltimore, four other mothers shared the stories of their sons who were killed by gun violence. This includes Jowanna Howze, the mother of Jawan Washington; Cheryl Hughes, the mother of Malik Mundy and Charles Tate Jr.; Shawanna Plummer, the mother of Ty’Jerell Curry; and Monica Gallmon-Hill, the mother of Rashaad Gallmon.

Throughout the documentary, viewers get to know the young men through archive video footage, as well as through their mothers’ and family members’ testimonies. There are smiles and happy memories, but there’s also grief and tears. It’s a film that will likely weigh heavily on its audience. But that’s part of Greene’s reasons for making it. He wants people to sit with that sadness and weight, to see a perspective that they might not have before.

“The city has to see the pain that these mothers are going through,” he said. “My goal is healing, not just for the mothers, but for the whole community.”

To Greene, “Our Boys” is more than a project; it’s personal. He knows several of the mothers in the film. It was tough for him at times, too, listening to the mothers pour out their hearts, which were broken for their sons.

“I always try to make sure everyone feels comfortable,” he said. “It was hard for a lot of them. It was very emotional for me, too.”

Baltimore had to work through the feelings of grief that had stuck around since 2014. And then there were the anger and trust issues she had. She didn’t even have the comfort of justice to hang on to. Hauson’s killer was never found.

Hauson was in high school when he passed. Baltimore never got to see him go to prom, graduate or choose a college.

Releasing her story, sharing her son with the world—it was scary. But it was healing, too.

“It gave me a sense of relief,” she said. “The grieving process never goes away, but he’s definitely here in our hearts.”

Greene hopes the film will help other mothers process their pain and heal. And for those who don’t share the same story of loss, Greene hopes it will give them a new perspective.

“I really hope everyone watches this film,” he said. “The stories that you’re going to hear are life changing.”

For more information about “Our Boys” or to watch the trailer, visit www.eligreenefilms.com.