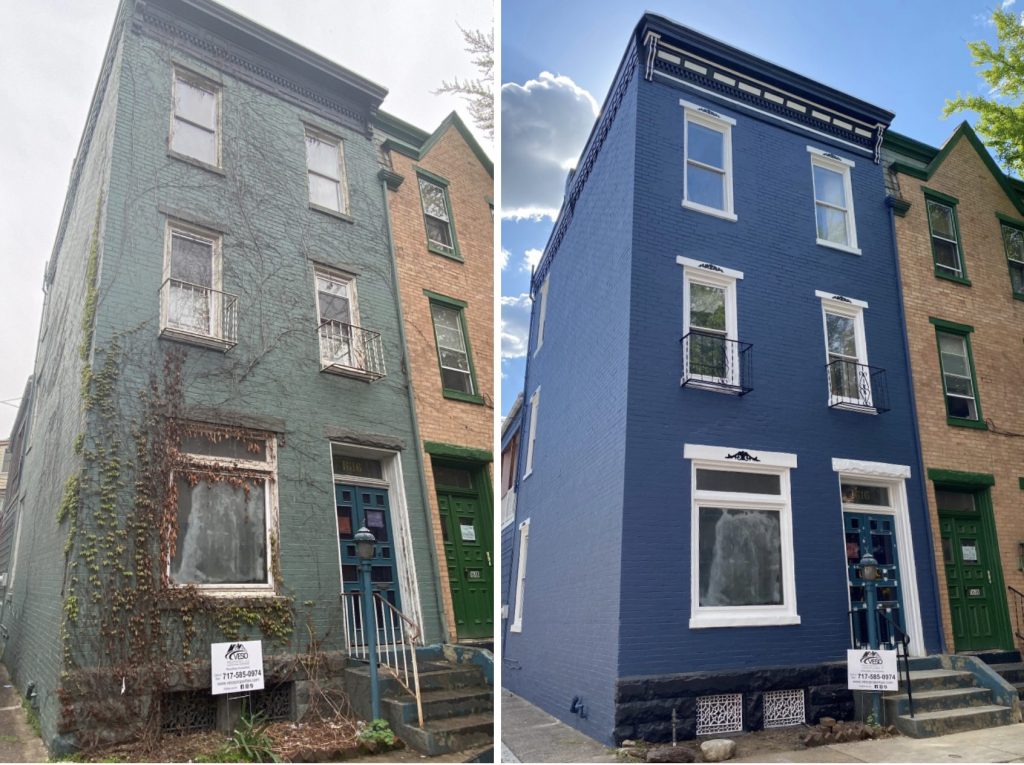 Before and after photos of Anne Kough’s Midtown Harrisburg house.

New homeowner Paul Northrop was confused by what he thought was the city’s vaguely worded historic preservation guidelines.

His rotting porch railings weren’t original to his 1896 home, but was he required to replace them with Gilded Age exactitude?

He was not, but the vagueness of Harrisburg’s “Historic District Design and Preservation Guidelines” kept him wondering until he got answers from the city’s historic preservation specialist.

Now, city officials hope that pending revisions to the guidelines will minimize confusion, explain options, and encourage owners of historic properties to do their part to protect Harrisburg’s architectural heritage.

In Harrisburg, exterior alterations and repairs in buildings within six municipal historic districts might require review and approval by the Harrisburg Architectural Review Board, or HARB, and City Council. When changes, removals or alterations are “visible from a public right-of-way,” HARB must review for architectural appropriateness of materials and features.

Until this spring, anyone opening the city’s historic preservation guide was met, first, with the name of Harrisburg’s mayor—Stephen R. Reed. His 28-year tenure ended in 2010.

Around 2018, HARB officials recognized the need for change, not so much for the mayor’s name but for the generalities used to explain HARB standards and processes. Public input on revised guidelines was collected through May 2021. A HARB vote to recommend approval is expected in July, before final adoption by City Council.

“We wanted to communicate that and improve the lines of communications between the neighborhoods and HARB,” she said.

The city’s Historic Preservation Specialist and Archivist Frank Grumbine got the staff assignment to rewrite the guidelines, following his hiring in 2019. In this role, he works directly with homeowners, presenting options and explaining the process. If they reach agreement on materials or products to be used, property owners can get “administrative approval” without needing to plead their case before HARB.

And though HARB has no data to show it, Grumbine believes that administrative approvals have increased during his tenure, slimming down the HARB meeting agendas.

“Everybody’s scared of the HARB, for some reason,” Grumbine said. “It’s really not that scary.”

Anne Kough bought a long-vacant Midtown rowhome in 2020 to renovate as a rental. Behind a façade covered in vines, she saw a beauty, tall and strong. She fell in love and made the purchase.

Working with Grumbine, Kough won administrative approval for much of the restoration. She could replace the front windows—not original to the home—with a matching look, but couldn’t replace rotting cedar shakes with faux-wood vinyl.

In the process, Grumbine recommended that Kough’s front door be repaired, while her contractor suggested making a replica—a pricey option—and donating the original to a museum. With safety measures for added security, she decided on repair and preservation.

“It has the old 1900 Victorian winding doorbell, a mail slot and smoked glass that’s in great shape,” she said. “If it was worthy of a museum, I felt it was worthy of saving and featuring on the house.”

A mindset of “preserve, repair and replace” can uphold the historic integrity of individual homes and entire blocks while it protects property values and promotes sustainability, Grumbine reminds property owners.

“The big goal is to change the paradigm, change the perception that historic preservation is bureaucratic, and there’s some nerdy dude in city hall who’s a big jerk,” he said.

Changes pending in the historic district guidelines include:

The revised guidelines add explanation to situations that continue to be decided on a case-by-case basis.

“Obviously, a wood window would be easily approved by HARB if it’s the same, but it’s not that simple,” Gribble said. “The configuration, the style, the profile—all that kind of detail is important to the look of the historic buildings. We wanted to elaborate more on that and not so much on just solely the materials.”

Paul Northrop and his girlfriend were longtime Midtown renters who finally bought a home in New Cumberland but missed the neighborly feel of Midtown. Just before the pandemic, they found their dream 1896 home in the 1500-block of Green Street—with a garage! However, it hadn’t seen much upkeep since the 1990s. Many of the windows, handrails and spindles were rotting away.

“Anything that’s not brick on the exterior is being replaced or repainted,” said Northrop.

The vagueness of the old guidelines, Northrop feared, could have disincentivized homeowners from maintaining their aging properties.

“A lot of people are probably scared away,” he said. “It’s not clear what you can do. So, if you’re risk averse, it makes you feel you can’t do anything to the home.”

By adding context to the guidelines, Grumbine hopes to share the gospel of repairing rather than replacing.

“Everybody wants to replace everything all the time because they want everything to be clean and shiny and new,” he said. “But people need to realize that, if you live in a 150-year-old neighborhood in a 150-year-old house, you should embrace the patina. You should embrace the alligatoring of the old paint under the new paint. Things aren’t going to look new because, you know, they’re not.”

Harrisburg’s tradition of protecting historic architecture is paying off in “unique flair that attracts people,” including the metropolis dwellers discovering the pleasures of life in a smaller, more manageable city, said Gribble.

“They have a sense of place,” she said. “They know where they are. That’s attractive to people, and there are proven economic benefits to preservation.”

As Northrop sees it, if Grumbine’s approach to hammering out solutions reflects how the guidelines have been revised, “then they’re headed in the right direction.” He loves the timelessness of his home.

“Just the original architectural details that we don’t have anymore,” he said. “It’s a representation of a bygone era. So, we’re going to do our part to make sure it’s around for another 126 years or so.”