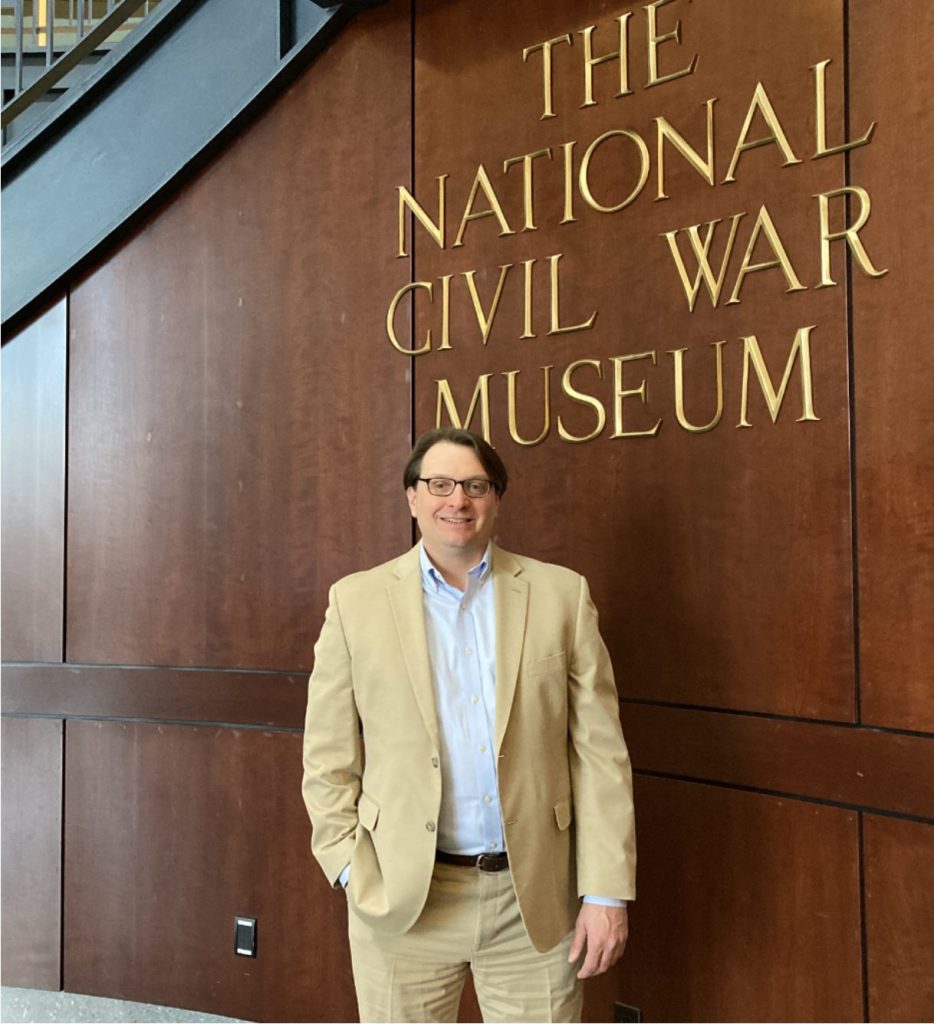 Jeff Nichols tells this story about the impact that a museum can have in tumultuous times.

It was 2017, shortly after the infamous “Unite The Right” rally in Charlottesville, Va. Thomas Jefferson’s Poplar Forest, where Nichols was executive director, was holding an event on the meaning of monuments, focusing on Richmond where statues still stood honoring Confederate generals Stonewall Jackson and Robert E. Lee.

Some wanted the statues preserved; others wanted them taken down. It was a civil discussion, recalled Nichols, who became CEO of the National Civil War Museum in Harrisburg in September.

At the end of the event, a woman approached Nichols. She told him her grandfather fought in the war for the Confederacy.

She still revered his service, but told Nichols this was the first time she had ever thought about the other person’s side in any real way. She thanked Nichols for it.

“Whether you change their mind or anything—who knows—but it’s that kind of thing,” he said. “We can’t change the world, but maybe we can change a couple of minds and get people thinking, just to be critical thinkers.”

A Connecticut native, Nichols was a history major on his way to becoming a schoolteacher when he started volunteering at a local museum.

He immersed himself in cataloging and preserving artifacts for the historical society in New Haven. He enjoyed interacting with the public, giving walking tours and programs. From that, he realized he had found a new calling.

Nichols moved on to positions with the Barnum Museum in Bridgeport and the Mark Twain House & Museum in Hartford, eventually finding himself in charge of Poplar Forest, the site of Jefferson’s plantation and personal retreat.

His last job before coming to Harrisburg was with Georgetown Heritage, a group devoted to fundraising and advocating for national parks. It was behind-the-scenes work, he said.

Nichols said that he missed working in museums and being with visitors on a regular basis. So, when the National Civil War Museum position opened up, he saw it as a chance to get back into that world.

The museum also rekindled memories of his first exposure to history. He was a boy of about 6 years old when his parents took him on vacation to Hersheypark—and then to Gettysburg.

The battlefield and re-enactors “triggered that imagination for me,” he said.

“It’s almost like a gateway drug for historians,” Nichols said of the Civil War. “You enter the field in a lot of ways by studying the Civil War. I think the fascination is that old adage of brother against brother, how a nation could turn against itself and really slug it out the way they did.”

Visiting the museum in Harrisburg for the first time with his wife, Nichols was impressed that the exhibit in place since the museum’s founding twice mentions the year 1619—the first written record of Africans being transported to the New World to be enslaved.

“It wasn’t as common 20 years ago to really say, the cause of the war was slavery,” Nichols said. “This museum, to its great credit, did that, and I think it carries through to this day.”

Sitting atop a hill overlooking a majority minority city, it is important for the museum to engage with the surrounding local community, such as Allison Hill, Nichols said.

“We want to make sure we are telling stories and doing programs and events that are appealing to a wide range of people,” he said.

The museum closed for much of February in order to install technology upgrades that will enhance the visitor experience.

“The museum has continued to upgrade its technology under Jeffrey’s leadership and is committed to presentations in its galleries which maintain our balanced approach while evolving its technology to today’s standards,” said museum board chairman J. Randall Grespin.

Grespin added that the board has “been impressed” with Nichols’ focus on fundraising, as well as a commitment to history education and to programming for an “ever broader and diverse citizenry.”

Upon arriving in Harrisburg, Nichols faced the task of rebuilding attendance that had dropped sharply due to the area’s COVID-19 shutdown and slow, uneven recovery.

Lately, activity at the museum has been picking back up. Attendance began rising last fall to where the December numbers were off only by about 6% compared to pre-pandemic levels, Nichols said.

Before the pandemic, the museum attracted about 45,000 visitors a year, on average.

Attendance is always low in the first quarter of the year, but the museum hopes to have a great summer, Nichols said. “It’s still coming back.”

Grespin noted that Nichols has the museum on track to fulfill terms of a 2017 deal giving it five years to raise $5.25 million to buy the portion of its collection that is owned by the city. Grespin added the city plans to apply the repaid funds towards improving Reservoir Park.

David Morrison, executive director of Historic Harrisburg Association, met with Nichols shortly after his arrival here. Morrison was impressed with Nichols’ communication skills and his knowledge of history.

A self-described “big fan” and advocate of the National Civil War Museum since its inception, Morrison said the museum has “untapped potential” and that Nichols is “the right leader” to achieve that potential.

For his part, Nichols sees himself building on the progress of his predecessor, Wayne Motts, whom Nichols credits with doing much to increase activity at the National Civil War Museum during his 10 years as CEO.

“The best way we can do that is through public programs, lectures, different talks, different panel discussions, different student programming that can bring in diverse audiences but also expand how we tell the story,” Nichols said. “It’s important, I think, for historic sites like this to show the importance of the historic era to today.”