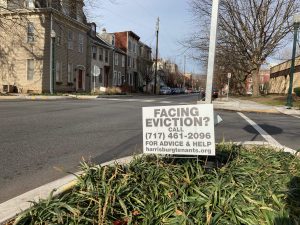 Harrisburg residents facing eviction are safe for another month to remain in their homes.

At a legislative session on Monday, City Council voted 6-0 to approve a bill issuing a moratorium on evictions in Harrisburg. Council member Westburn Majors recused himself from the vote, due to a conflict of interest.

“I can breathe a sigh of relief going into the holiday knowing we are protecting our residents,” council member Danielle Bowers said.

City officials found that there would likely be hundreds of people facing eviction in the coming weeks, with not nearly enough shelter space available during the pandemic, city Solicitor Neil Grover explained. This could pose a danger both for newly homeless residents and for everyone else, as COVID cases continue to climb in Dauphin County, he said.

Currently, a moratorium from the U.S. Centers for Disease Control is in effect through Dec. 31, but the federal government has not yet released a plan to extend the declaration.

Harrisburg’s halt on evictions fills the gap for now, extending for 30 days into mid-January. The city may then choose to renew it for another 30 days if needed.

The bill states that no resident can be evicted for non-payment of rent or lease expiration.

Greater Harrisburg Tenants United, an advocacy group, believes that the legislation, focused on non-payment and lease expiration, leaves loopholes that still could lead to evictions.

“That opens the door to all kinds of petty technicalities that a landlord could deploy to terminate a lease and evict a tenant,” said Caleb Cossick, a member of GHTU, in a public comment on Monday.

Grover said that city enforcement officers will oversee compliance with the legislation, with the power to fine non-complying landlords up to $10,000 or 90 days in jail.

“The idea is to essentially make noncompliance something very unattractive,” he said. “We have essentially criminalized the violation.”

However, Grover did say that the ordinance does not take away landlords’ right to be paid, and they will need to receive payment once the moratorium or string of moratoriums ends. They may also still file for a court hearing, although lockout of a resident is banned.

Council member Ausha Green expressed concern for what will happen once the moratorium expires and tenants must pay their debts.

“I would say this solves the most immediate problem, but it doesn’t solve the other large problems that are being caused by the pandemic,” he said.

Grover added that, going forward, he hopes that the city, state or federal government will be able to offer landlord assistance.

Additionally, the bill does not apply to properly registered hotels and motels. It does apply to some rooming and boarding houses.

“The city is serious in our intentions,” Grover said. “We are not going to continue or start evictions in the middle of what is a dire situation.”