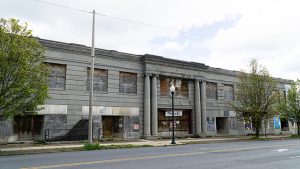 The Hudson Building on N. 6th and Maclay Streets.

Several Harrisburg companies and organizations soon will find out if they will receive state grant money for their large-scale redevelopment projects in the city.

“Some of these aging, larger structures in Harrisburg have tremendous fixed costs,” Papenfuse said. “Those costs can really overwhelm an organization which is trying to maintain them.”

The City of Harrisburg is requesting the most money of the nine local applicants. It is asking for $8 million to renovate the MLK City Government Center.

The RACP funding would push forward a plan to increase accessibility and community use of the building, explained Marc Woolley, the city’s business administrator.

Starting at the first floor, the city plans to soften the current cold, brutalist architecture with an overhang on the exterior of the building and a more welcoming lobby space with tables inside. Woolley said the city would add a small business incubator space, as well. Improvements to the other three floors would follow.

“We want to take hold of the namesake of the building—the Martin Luther King Jr. Government Center,” Woolley said. “It’s really about community fairness and accessibility.”

Many types of organizations, both public and private, are eligible for RACP funding. The annual program is for regional economic, cultural, civic, recreational and historical improvement projects, according to the PA Office of Budget.

Leaders of The Bridge Ecovillage hope to secure a significant amount of funding for their renovation of the former Bishop McDevitt school building in Allison Hill. Chief Executive Officer Gary Gilliam said the requested $2 million would go towards beginning construction, installing HVAC and sprinkler systems, roofing and electrical work, among other items.

“Getting that initial funding is paramount to getting the project to succeed,” Gilliam said.

“For projects of this scale, the cost grows quickly,” Maust said. “This would allow us to get started soon.”

Maust said that he is still considering ideas for what the building will hold, but he is leaning towards an educational aspect and a grocery store.

Marc Kurowski, president of city-based K&W Engineers, also spoke of how the grant money would help fund plans to update and upgrade the historic King Mansion on the 2200-block of N. Front Street. The building serves as K&W’s headquarters, but includes event space, which is used for weddings and large events.

In Harrisburg, other projects that have applied for RACP funds include:

Typically, about one-third of applicants statewide receive RACP funds each year and often in lesser amounts than requested.

“We really have a wide array of really interesting projects being proposed for Harrisburg,” Papenfuse said. “For large-scale building projects, there is a need and role for this program.”

Local representatives including Sen. John DiSanto, Rep. Patty Kim (D-Dauphin) and Gov. Tom Wolf’s office will have the say in who is selected for the grant, Papenfuse said. A decision is expected by the end of the month, he added.

“From the city’s perspective, we hope we can fund all the projects,” Papenfuse said.

Disclosure: Alex Hartzler, co-publisher of TheBurg, is a principal with WCI Partners.