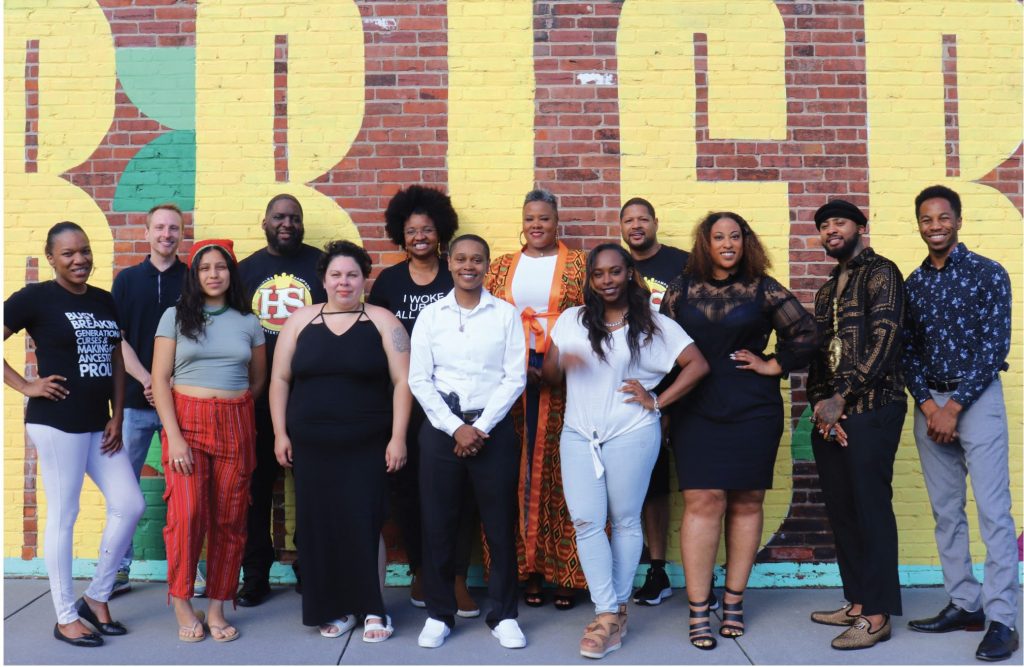 For Dr. Kimeka Campbell, Juneteenth means a lot of things.

It’s about celebration, history, reflection, rest, education and economics. People may spend the day differently, but one thing’s for sure—it’s an important holiday for all.

“We are celebrating American history,” Campbell said. “It’s an important day for every single American. How you observe it is in your hands.”

All of these different meanings behind the holiday will be spotlighted in this month’s Juneteenth HBG event, hosted by the Young Professionals of Color-Greater Harrisburg (YPOC), co-founded by Campbell. And while the holiday itself may be just one day, YPOC plans to celebrate all week long with conferences, reenactments, art experiences, concerts and vendor markets.

Juneteenth—June 19—commemorates the ending of slavery in the United States. It is recognized as the day in 1865 when the remaining African American slaves in Texas received word that they were free. While celebrations of the holiday date back to as early as the year after those last slaves were freed, Juneteenth was only officially recognized as a national holiday in 2021.

YPOC has held Juneteenth events for the past few years, but 2022 will be their biggest yet. Their vision is far-reaching, as shown through their theme, “One City. One Team. One Economic Impact.”

The economic impact of Juneteenth is of special importance to Campbell and the team as they head into the holiday.

“The ending of slavery is not just about freeing people physically, it’s also about being free to economically advance,” Campbell said. “Wealth was stolen from Black people, even post-slavery.”

After slavery ended, targeted policies and structural practices such as sharecropping, Jim Crow laws and redlining made economic advancement difficult. With the long-lasting, multi-generational effect of this history in mind, YPOC came up with its program for Juneteenth.

“It’s this idea of economic impact and restoring wealth to the Black community,” Campbell said. “This is a drop in the bucket of that very huge landscape, but we wanted to do something and craft a week where we had education, economic drivers, entertainment and celebration.”

Throughout May, the committee held microenterprise business courses, free to 10 local entrepreneurs. All of those who completed the course were offered free vendor slots at the June events. La Cultura, a partner in the Juneteenth events, hosted the courses.

“There needs to be more Black businesses to shop from, and they need to last longer,” said La Cultura founder Elyse Irvis.

Additionally, there will be a downtown restaurant crawl, a joint event with UPMC’s “Healthy Harrisburg” program and a kickoff event at the state Capitol. A Juneteenth conference will be held on June 14 at HACC, featuring local speakers from the region and nationally renowned keynote speaker Michael Eric Dyson. The event will include interactive sessions, panel discussions and a Q&A. Many of the events are free, but some require tickets.

Campbell is proud of the unity her organization has achieved through partnerships in the Juneteenth event. In past years, community groups have largely held separate events scattered throughout the city, but she feels that this year is more of a collective effort.

“It is probably the most collaborative Juneteenth event the city has ever seen,” she said. “Together, we can do more and leave more of an impact.”

Organizations like UPMC, the African American Chamber of Commerce, The Singer’s Lounge, La Cultura, Capital Blue Cross and Dauphin County are partners in the event.

YPOC also received a state grant from the Pennsylvania Tourism Office’s “Journeying Toward Freedom” grant program in April. The funds will support their Juneteenth efforts.

“To see it come this far—I’m very grateful,” Campbell said. “This is a legacy building event for the city.”

While the team plans for the day, Campbell has a request for Harrisburg-area businesses—give employees the holiday off from work.

“You’ll actually make your employees feel like you care about them,” Campbell said. “It’s a tangible thing to do. Give people the day off.”

Shaniqua Williams, another member of the Juneteenth leadership team, sees the day off as a way for people of all races and cultures to learn more about the history of the holiday. She hopes YPOC’s events will prove educational for attendees.

“This is something that Harrisburg truly needs,” she said. “There’s just so much to celebrate. The celebration starts in your heart.”

For more information about Juneteenth HBG and the Young Professionals of Color-Greater Harrisburg, visit www.ypoc-hbg.org.

Harp Love in Action Protest: Monday, June 13, 3 to 5 p.m., at the Harrisburg Mall parking lot, opposite the Dauphin County Prison