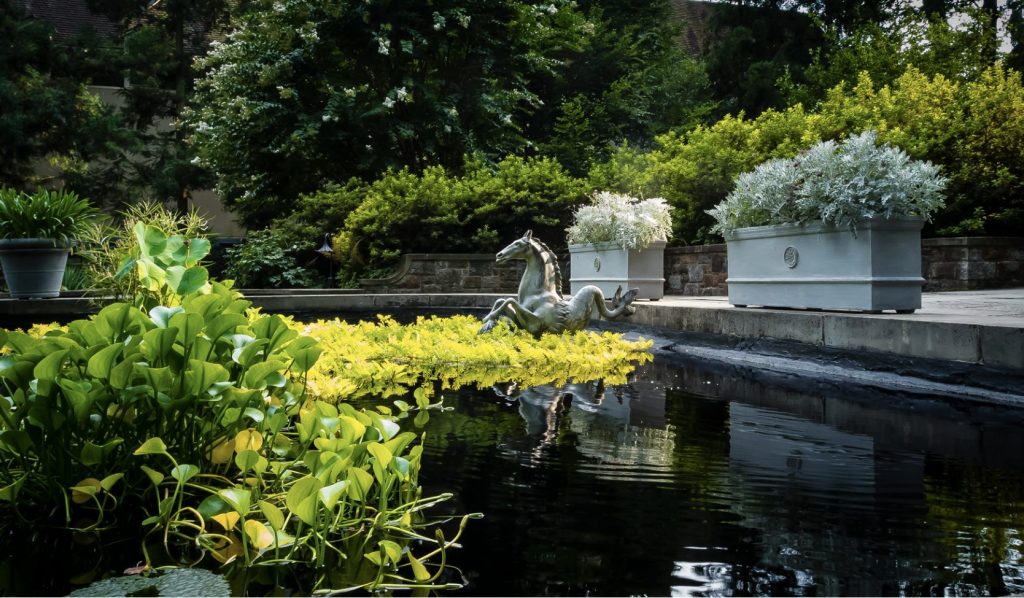 How do you turn explosives into trees, shrubs and flowers?

In a sense, that’s what happened in Delaware’s Brandywine Valley, where one famous family amassed a fortune from gunpowder, the legacy of which can now be toured.

A recommended first stop is Winterthur (pronounced “winter-tour”), which is open to the public today thanks to Henry Francis du Pont, a horticulturist and antique collector who, upon inheriting the Wilmington property, set about turning the estate into a museum.

To understand how H.F. du Pont ran the estate, this quote from an article in American Heritage, reads: “Footmen in knee breeches attended to the family, and the atmosphere at Winterthur was so icily formal that one kinsman of ‘Uncle Harry’ thought it ‘too tony’ to bear and resolved never to return again. In a family not noted for humility, Winterthur was regarded as markedly pretentious.”

Guests can take a tram tour of the grounds to learn more about H.F.’s love of naturalist gardens. As a horticulturist, he believed it was important to select the best plants from around the world to enhance the landscape of his 60-acre garden.

Those who visit in the fall will enjoy the vibrant colors of the leaves as they turn yellow, orange and copper, along with the crimson crabapples, which are loved by the birds and lend additional color to the landscape. Those who wait for spring will see even more color when the hills come alive with vibrant azaleas, daffodils, bluebells, lavender and white and pink magnolias.

The nearby museum boasts 175 period-room displays containing about 85,000 objects acquired by H.F., who continued to add to his collection until his death in 1969. Artifacts span two centuries of American decorative arts, dating from 1640 to 1860.

Visitors who ascend to the second floor of the gallery will learn all about the “Lady of the House,” Ruth Wales du Pont. Guests will find out about her love for her husband, her devotion to her daughter, her keen sense of humor, and her love of music. It’s also been revealed, through diaries and private letters in the Winterthur archives, that Ruth suffered from “melancholy” and anxiety, yet was lively and gregarious in public.

The gallery includes a reproduction of her 1916 wedding gown, personal objects like her sheet music and a traveling case to help visitors gain an understanding of what it was like to be Ruth Wales du Pont.

A second destination related to the du Ponts is the Hagley Museum, comprised of 235 acres along the banks of the Brandywine River. It’s also the site of the gunpowder works founded by E.I. du Pont in 1802. Many guests think of war when they think of gunpowder, but it was used for much more, such as mining and tunneling, which were extremely important in America’s early years.

Guests begin their visit by checking in at the visitor’s center, where they can schedule a ride on a bus to take them to the powder yard to see old stone structures that housed the manufacturing process, along with working 19th-century machinery, waterwheels and turbines, black powder explosion demonstrations and more.

The mansion on site was built in 1803 and was home to five generations of du Ponts.  Visitors who tour the home will see it as it was when the last family member lived there—filled with furnishings, folk art and items that the family brought from France in 1799, as well as later furnishings.

The Hagley Museum also hosts special events and demonstrations throughout the year.

If you’re in need of accommodations, the Inn at Montchanin Village & Spa is among the 10 oldest hotels in the United States. It’s located within 10 to 20 minutes of Winterthur and the Hagley Museum and Library. Listed on the National Historic Register, it is comprised of 11 restored buildings that include 28 guest rooms.

The settlement, named after Alexandria de Montchanin, grandmother of the founder of the du Pont company, was once part of the Winterthur estate and was home to laborers who once worked at the du Pont powder mills.

Another notable destination is historic New Castle. Located six miles south of Wilmington, the city was settled in 1651 under the leadership of Peter Stuyvesant, famous as the last director-general of the New Netherland colony, now New York City.

Walkable and quaint New Castle features a few shops and restaurants, including Jessop’s Tavern, which dates back 300 years. If you request a beer menu, expect them to drop a tome, reminiscent of a college dictionary, on your table. Jessop’s Tavern is open for lunch and dinner, seven days a week. Within walking distance of Jessop’s Tavern is a historic cemetery, where George Read, a signer of the Declaration of Independence, is buried.

This just scratches the surface of what to see in the Brandywine Valley region, especially if you’re a history lover.

For more information on things to do and see, visit www.BrandywineValley.com.

For more Information, attractions mentioned in this story include:

The Inn at Montchanin Village
www.montchanin.com